Pizzo Cengalo is a mighty granite mountain belonging to the Western Rhaetian Alps, Masino-Bregaglia-Disgrazia group, and located on the border ridge between Val Masino (Sondrio) in the Italian territory and Val Bondasca, side of Val Bregaglia, in the Swiss territory. This is the second one as height but the biggest rock structure in the whole Masino-Bregaglia-Disgrazia Group. Its North wall (on Bregaglia valley) is the highest wall (1300m) of the Rhaetian Alps.
It is an imposing mountain in the shape of a truncated pyramid. The summit is formed by a large snowy dome with an ice cap covering in part its West side. From the summit three important ridges are generated, that make Pizzo Cengalo truly characteristic. The South ridge, snowy and rounded in the upper part, forms a conspicuous fore-summit, after which it becomes steep and sharp and descends in the upper part of Val Porcellizzo. The West ridge descends to Colle del Cengalo, while the East ridge descends to Colle dei Gemelli. These ridges delimit three sides: the North side, towards Switzerland, constitutes the highest and most complex wall, with mighty pillars and steep channels, the South-west face, on the Italian side, is clearly visible from the Refuge Gianetti, the South-East side shows wide and  smooth slabs.
Pizzo Cengalo Normal route starts from the Rifugio Gianetti and climbs through the Cengalo pass and the wide West ridge. It is an easy and popular route, which however requires a certain mountaineering skill on rock and snow.

The first ascent was performed by the British pioneers D. W. Freshfield and C. C. Tucker with the alpine guide Francois Dévouassoud on 1866, july 25th, along what is still the Normal route of the mountain today.

Among the other routes the best known are the "Spigolo Vinci", a fairly popular rock route on the South ridge of the Southern fore-summit (400 m, TD V + / A0 or up to 6a in free climbing) and the route Gaiser-Lehmann on the North-west spur, rising from the Cengalo glacier (1100 m, TD V +).

Unfortunately in the winter 2011 a large part of the north face was hit by a landslide which changed its appearance, destroying several existing climbing routes. Further landslides on the North-East side occurred in the August 2017, including one of colossal dimensions (approximately 4 million cubic meters of material are estimated), further modifying the conformation of the wall and devastating the underlying Val Bondasca.

Northern side: Val Bregaglia - can be reached by car from Milan (SS-36) - Milano - Lecco - Chiavenna .... Malojapass : along this road you can enter the Val Bondasca

Southern side: Valtellina - can be reached by car from Milan (SS-36) - Milano - Lecco - Colico .... Sondrio : along this road you can enter the Val Masino 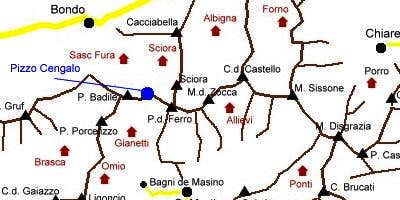 North wall the highest and most impressive wall

South-east wall
on this wall many routes and variants, difficulties starting from AD sup : the most important are the Bonacossa-Polvara and the via Chiara (Gugiatti)

South ridge 2 different possibilities on this ridge : - Via Vinci - TD - the finest climb you can make starting from Gianetti Hut --(more pics from Lorenz) - Via Bonacossa - D - this route goes round the Vinci route avoiding the main difficulties

South-west wall this is a wall that ends, after about 150m on easy rocks under the normal route, some routes on this wall can be used if you find Vinci route too difficult.
On this side some secondary towers (Selene and Sinistra) can be used for sport climbing

South-east side can be ready to climb in june, anyhow the descent could be a little complicate
all other sides from july to september
beware of bad weather, very dangerous on this summit just as on the near Piz Badile

3 confortable huts give you the possibilities you need.

climberland: link to a page about Vinci edge