The Ptarmigan Wall is a named feature in Glacier National Park that consists of a narrow, pinnacle-studded ridge guarded by sheer cliffs on either side. Its many peaks and pinnacles offer numerous objectives for scramblers and technical rock climbers, and the formation's western side holds one of Glacier's greatest backcountry routes, the system of goat trails from Ptarmigan Tunnel to Ahern Pass. The Wall itself is spectacular to see, and the scenery from it is among Glacier's best. Think of this as an informational mountain page about the formation itself but not the climbing opportunities themselves, as there are too many on this large formation to detail sufficiently; links and descriptions will guide readers to some of the formation's major destinations. Maps and descriptions are not precise enough to provide a clear definition of the boundaries of the Ptarmigan Wall, but the formation runs roughly from Ptarmigan Tunnel on the north end to Iceberg Peak on the south. One could plausibly argue that the sheer cliffs between Iceberg Peak and Mount Wilbur are an extension of the Ptarmigan Wall as well. In A Climber’s Guide to Glacier National Park, J. Gordon Edwards describes Ptarmigan Spire, a prominent peak not far south of Ptarmigan Tunnel, as “the abrupt northern end of the Ptarmigan Wall,” but USGS maps indicate that the Ptarmigan Wall extends a short distance north of Ptarmigan Tunnel. Similarly, Edwards calls B-7 Pillar, near the southern end, the highpoint of the Pinnacle Wall (part of or synonymous with the Ptarmigan Wall; see the next section) even though I once read (where I can’t recall) that higher Iceberg Peak is the southern end of the Ptarmigan/Pinnacle Wall. 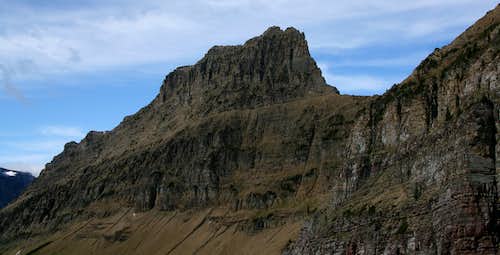 Although I have not seen "Pinnacle Wall" on USGS quads, I have seen the name on photo captions and in route descriptions. I cannot say for certain whether "Pinnacle Wall" is just a synonym for "Ptarmigan Wall" or if it refers to the spire-studded section of the Ptarmigan Wall north of Iceberg Notch, and search attempts on the Web have yielded nothing useful. The two may even be entirely separate features. I welcome any credible information on the subject. 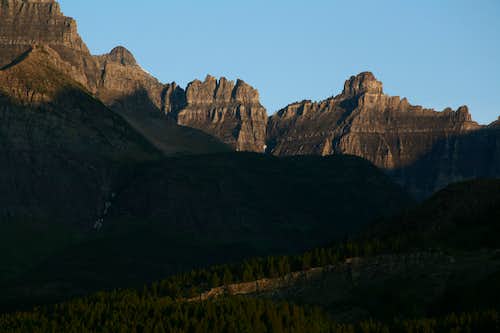 • Ptarmigan Tunnel-- A hiking destination, the tunnel is about 5.3 miles from the trailhead. The tunnel is only open in the summer, and you can pass through it en route to a backpacking destination or just to see the view from the other side. The scree slopes by the tunnel are also the way to access the Ptarmigan Wall Goat Trail. • Ptarmigan Wall Goat Trail-- An exposed traverse on narrow ledges for about four miles between Ptarmigan Wall and Ahern Pass. This is one of the greatest routes in the park. From Ahern Pass, one can climb and then descend Iceberg Notch to return to the trailhead or hike approximately five miles to Granite Park Chalet (reservations for overnight stays required); there is also a backcountry campground at Granite Park. • Ptarmigan Spire-- This prominent peak is a significant route-founding landmark for people on the Ptarmigan Wall Goat Trail and would also make an enticing climbing destination. Routes would be loose and exposed, though, and almost certainly no easier than Class 4. • The Hole in the Pinnacle Wall-- On pg. 162 of the Edwards guide, there begins a discussion of a route to this feature, which is visible, especially in the afternoon, from points in Many Glacier Valley and from the trail to Iceberg Lake. The “hole” is high up on the wall, almost at the crest, and the route is Class 4, loose, and exposed. A belay is recommended. Edwards notes that views are no different than they are from similar points along the Wall, but the unique setting-- the hole is "about four feet high, six to eight feet across, and perhaps five feet through" (from the Edwards guide)-- makes the journey worth it. • B-7 Pillar-- This peak is a short distance north of Iceberg Notch and probably sometimes mistaken for Iceberg Peak. All routes up B-7 Pillar are technical and highly exposed. • Iceberg Notch-- Accessed from Iceberg Lake or Ahern Pass, the Notch is a good scramble with outstanding views, especially down to the Lake and west to dramatic peaks such as Ipasha and Merritt. The Notch is sometimes used by climbers doing the Ptarmigan Wall Goat Trail. • Iceberg Peak-- Whether or not it is technically part of the Ptarmigan Wall, it seems to belong in the neighborhood and has some of the best views in the park that can be found on a day climb. Easier routes exist on the west side, but any climb from the east via Iceberg Notch will involve Class 3 and possibly Class 4 scrambling. The peak rises over 3000’ above Iceberg Lake, and much of the rise is by sheer cliffs. The view down is thus dizzying. 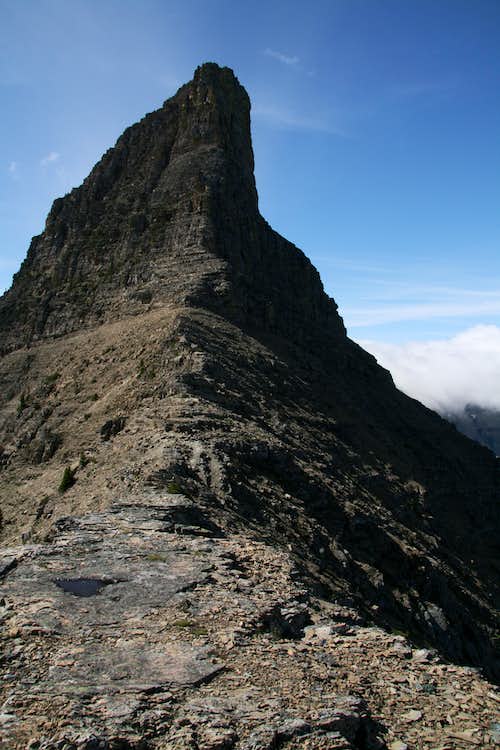 The trail begins near the cabins of Swiftcurrent Motor Inn in Many Glacier Valley and immediately climbs onto the slopes beneath Mount Henkel. These open hillsides are excellent grizzly habitat, so don't be surprised to see one foraging somewhere nearby or above you. For well over a mile, the trail stays in the open, and then it heads into the forest, though the trees are not too thick and obstructed views are numerous. Nearly three miles along is Ptarmigan Falls and the junction with the trail to Ptarmigan Tunnel. Stay left to access Iceberg Peak, Iceberg Notch, B-7 Pillar, and the Hole in the Ptarmigan Wall (the trail ends at Iceberg Lake in about two miles); bear right and hike about 2.5 miles to reach Ptarmigan Tunnel and access for the Ptarmigan Wall Goat Trail and Ptarmigan Spire, passing lovely Ptarmigan Lake along the way. Note-- You cannot camp at Iceberg Lake or anywhere else along that trail, and you cannot camp on the trail to Ptarmigan Tunnel. 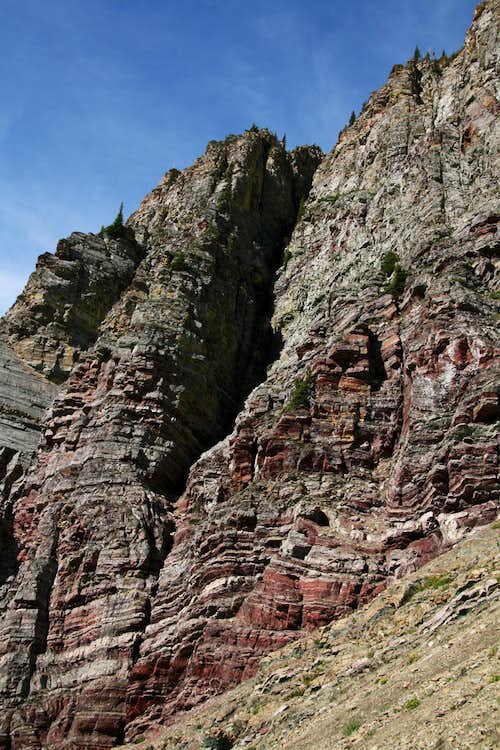