Rocky Peak is the 6th highest peak in the Oquirrh Mountains with 300+ prominence. It is often overlooked because of nearby Lowe Peak, the second highest and most well known climb in the Oquirrhs. I think it deserves a page on summitpost because it may be the most rugged summit in the range. Not that it's difficult, it's just most of the Oquirrhs are generally simple walk ups. For Rocky Peak, you might actually lay your hand on a rock or two to access the top. Rocky is the heart of the southern Oquirrhs. To the north is the Kelsey Peak grouping, west is the Bald Mountain peaks, south and east are Lowe and Flat Top.

Rocky Peak viewed from the south on peak 8790 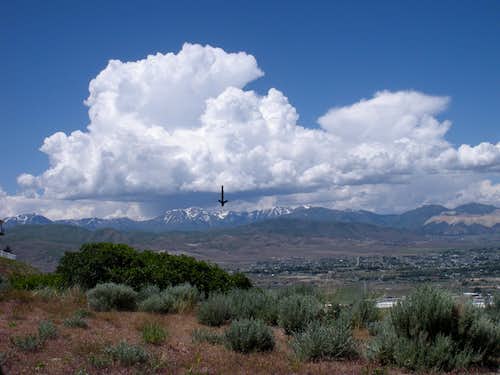 Take the Ophir turnoff of State Route 73 between mile markers 4 and 5. Drive up 3.5 miles to Ophir, then 1.5 miles to the end of the road. You'll pass a county campground and there is also camping near the trailhead. Most cars should be able to get to the trailhead although there are a couple water crossings in spring. If you climb here too early, the road will still have snow increasing your hiking distance. 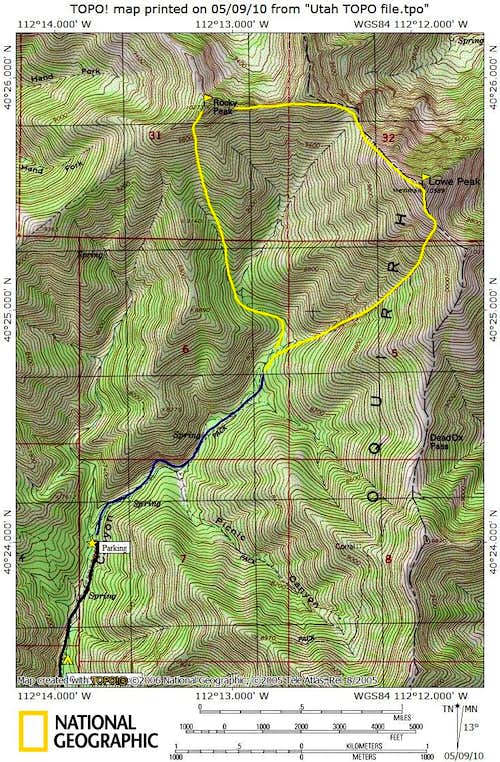 There are no fees to park at the end of the road in Ophir Canyon. Although there is private property everywhere, there are surprisingly few no trespassing signs. My data shows the peak on private property, much like nearby Lowe Peak. Lowe Peak has the reputation of being BLM land but most of it is not. Like Lowe, there doesn't seem to be an issue with whomever owns the property of the general public hiking or horseback riding in the area. 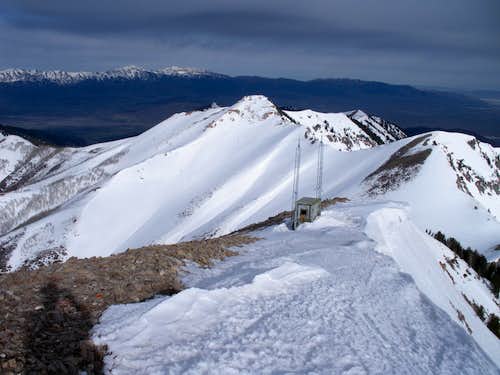 About a mile before the trailhead is a county campground. Sights are limited so weekends are probably a bad time. There are a few undeveloped sights just before the trailhead next to the creek. If you were just pitching a tent for the night, just up the trail about 50 feet (over the creek), there was some flat spots.

Could climb anytime, but spring has to be the best when you can avoid all the brush walking on consolidated snow slopes. May is great as the snow should be melted to the end of the road and hopefully the first mile or so of trail. Plus the snow beyond that point should be solid.

Hike the trail as it crosses back and forth over the creek (bring poles in early season). After a 1.3 miles you hit a large meadow with Lowe to the east. If you want to climb Lowe Mountain first, climb up the drainages on it's west face. These drainages hold snow through May. The drainages fork several times, all will get you to the ridge south of the summit. I kept to the right taking the largest ones into some Aspens. Once on the ridge, a small trail will take you north to the summit. An ice axe and snowshoes/crampons were nice for the hard pack steep snow sections. A register from 1996 is on the summit. To reach Rocky Peak, drop down the NW ridge 800 feet, traverse around or over point 10,160. There were seriously huge cornices here, be careful in early season. Rocky Peak is a good scramble, definitely the most "alpine" like summit I've done yet in the Oquirrhs. Its still easy enough, I was able to keep my snowshoes on up the east ridge and down the southwest ridge. If you are just doing Rocky Peak, one could easily continue up the trail from the 1.3 mile point described and follow the main drainage up to the east or west ridge of Rocky Peak. Once on the ridges, minor scrambling will get you up to the summit. 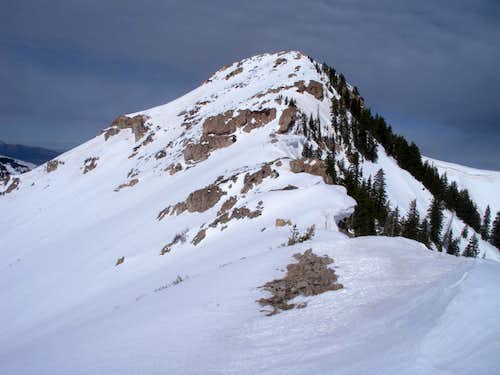 Rocky Peak east ridge at base 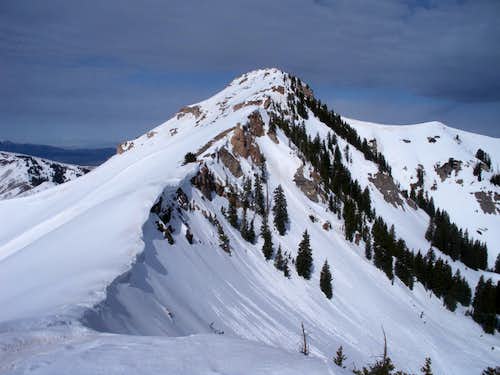 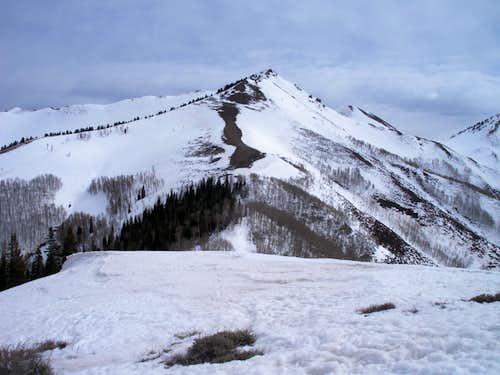 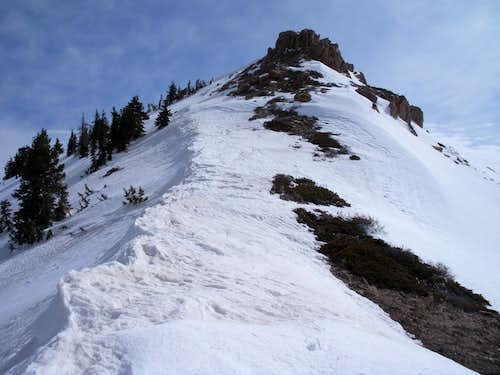 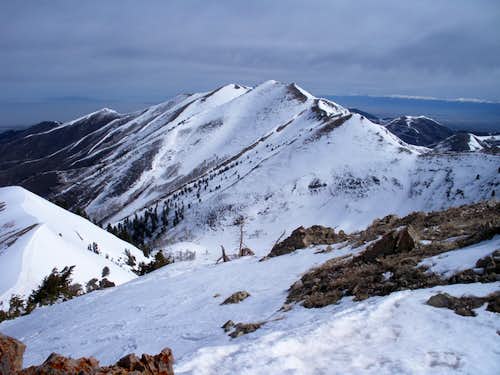 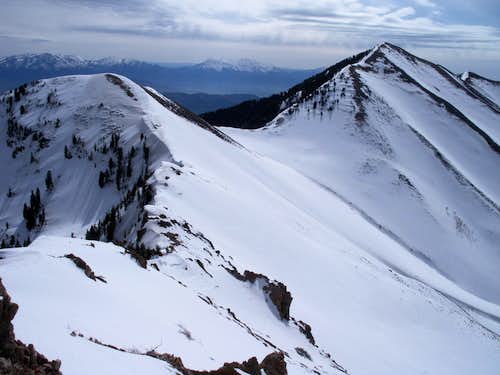 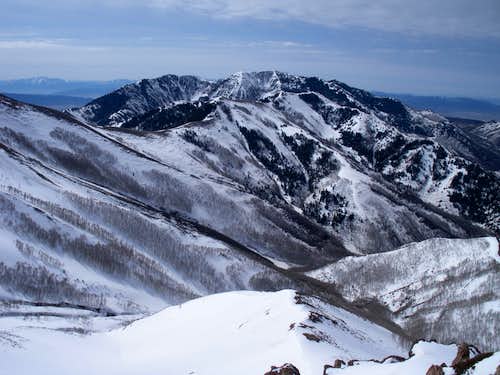 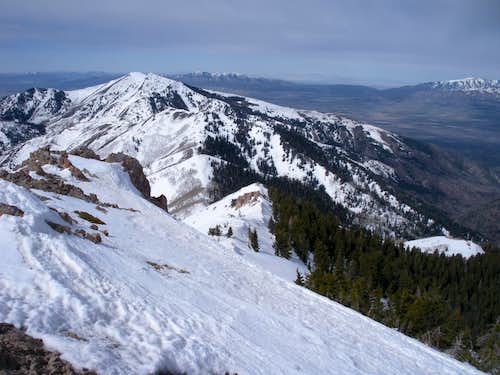 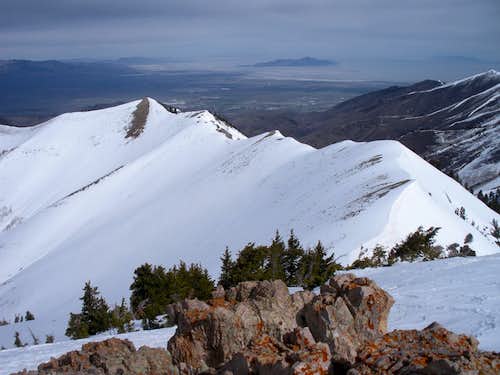