The Legend of Sleeping Bear

"Long ago, along the Wisconsin shoreline, a mother bear and her two cubs were drivin into Lake Michigan by a raging forest fire. The bears swam or many hours, but eventually the cubs tired and lagged behind. Mother bear reached the shore and climbed to the top of a high bluff to watch and wait for her cubs. Too tired to continue, the two cubs drowned within sight of the shore. The Great Spirit Manitou created two islands to mark the spot where the cubs disappeared and then created a solitary dune to represent the faithful mother bear." -Chippewa Indian Legend 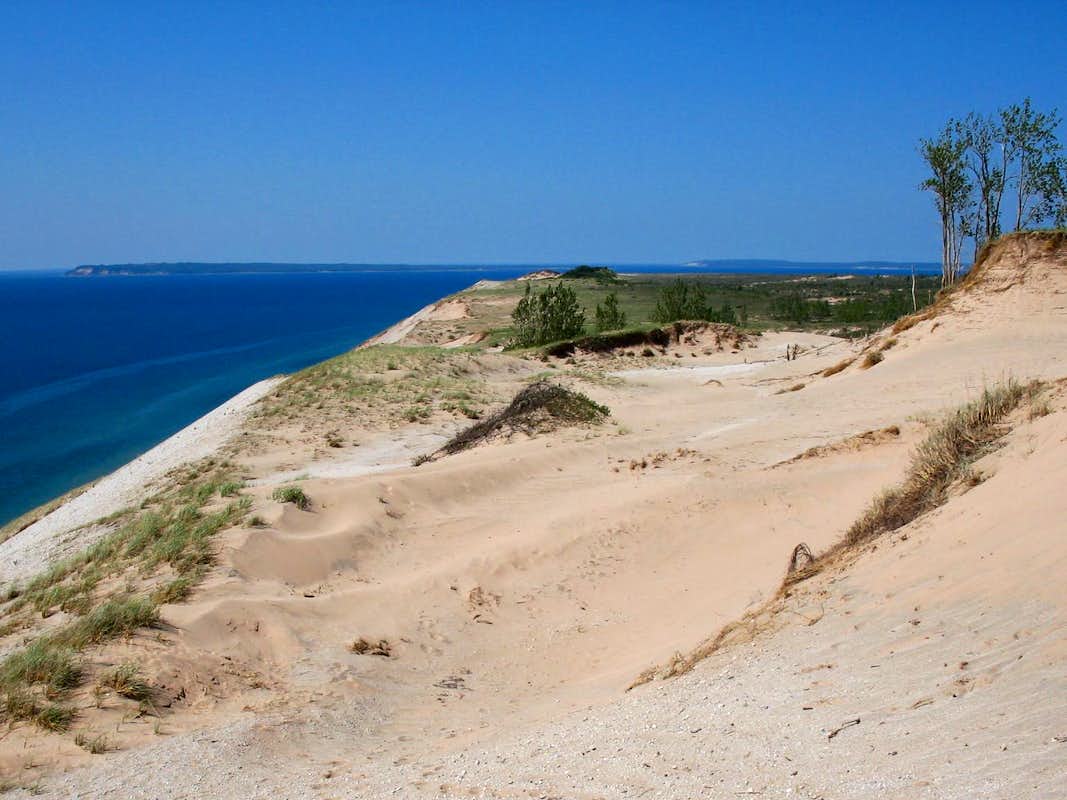 Today the towering dunes of Sleeping Bear are forever protected within Sleeping Bear Dunes National Lakeshore. The lakeshore encompasses 35 miles of Lake Michigan shore along Michigan's "little finger," the Leelanau Peninsula, as well as the two wilderness islands of North and South Manitou. The park contains 106 square miles of some of the most varied and unique terrain in Michigan. Along the lakeshore sand dunes rise up to 450' above the water. Away from the harsh winds of the lakeshore, forests of beech and maple cover rolling hills and surround small glacial lakes. Its a land of extremes. On the exposed dunes the summer heat can be unbearable while in the winter northwest winds deposit 150+ inches of snow on the park. It is a land of contrasts, and that to me is what makes this place so appealing.

Michigan owes much of its landscape to ice. During the last Ice Age the state was covered in glaciers up to two miles thick. When the last of the ice retreated north some 11,800 years ago it left behind numerous depressions and basins. As the land rebounded from the weight of the ice and the rains fell the Great Lakes formed. In the centuries that have followed erosion has continually ground down the Michigan shore and the prevailing westerlies have taken all that debris and piled it into the towering dunes we see today.

Almost since the ice retreated the dunes have been inhabited by man. For thousands of years the dunes were a place of wonder known only to the local indians. By the 1800's pioneers began to settle in the area, not for the dunes but for the lush virgin forest that covered them. In the late 19th and early 20th Centuries the community of Glen Haven was a thriving lumber town providing lumber from the surrounding area and Manitou Islands to the booming cities down-lake such as Chicago. Luckily for future generations a lumberman by the name of Pierce Stocking wanted to do something very unnatural for a logger, he wanted to preserve this unique area. In 1967 Stocking set aside a portion of the dunes as Sleeping Bear Dunes Park. Thanks to the efforts of Stocking, along with help from then-senator Phillip Hart, congress set aside 67,840 acres to be preserved as Sleeping Bear Dunes National Lakeshore.

The Lakeshore is divided into two distinct sections, with two completely different personalities…the mainland and the Manitou Islands. The mainland is the easily accessible, somewhat touristy section while the islands take a bit more planning and are sanctuaries of wilderness.

The mainland of the park includes many short hiking trails, nearly all of the parks more famous attractions, and both modern campgrounds. The towns and townships surrounding the park are lightly populated (except in the summer when the area takes on a more resort-like feel) and virtually devoid of the gaudy tourist traps and trinket shops that plague the outskirts of many National Parks. The mainland itself is divided into three separate sections: the north, central, and south. 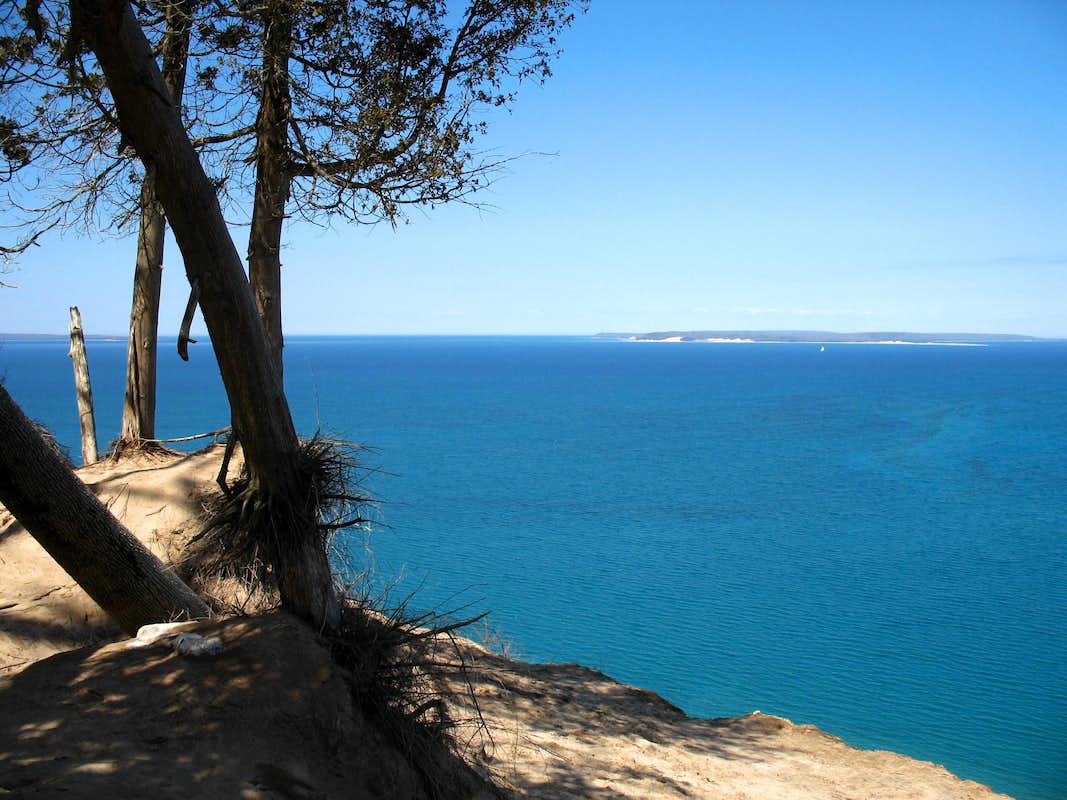 The north section is located north of Glen Arbor and includes beautiful Good Harbor Bay as well as the towering dune known as Pyramid Point and the Port Oneida Historic District. 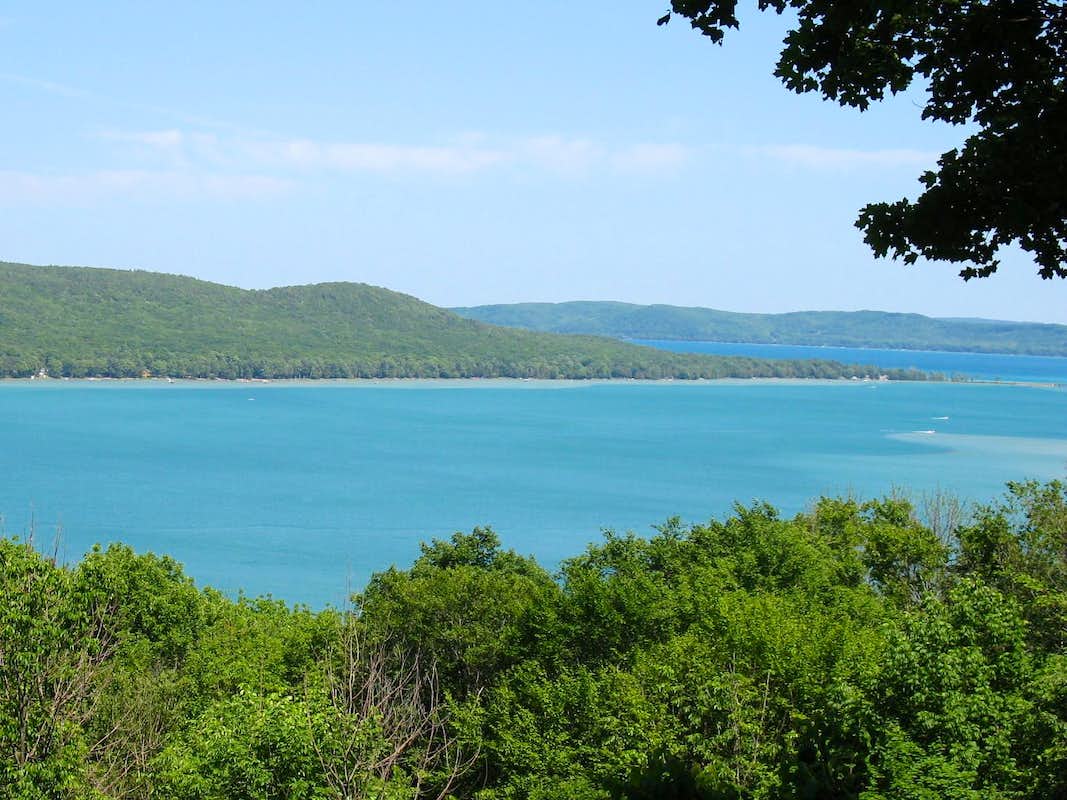 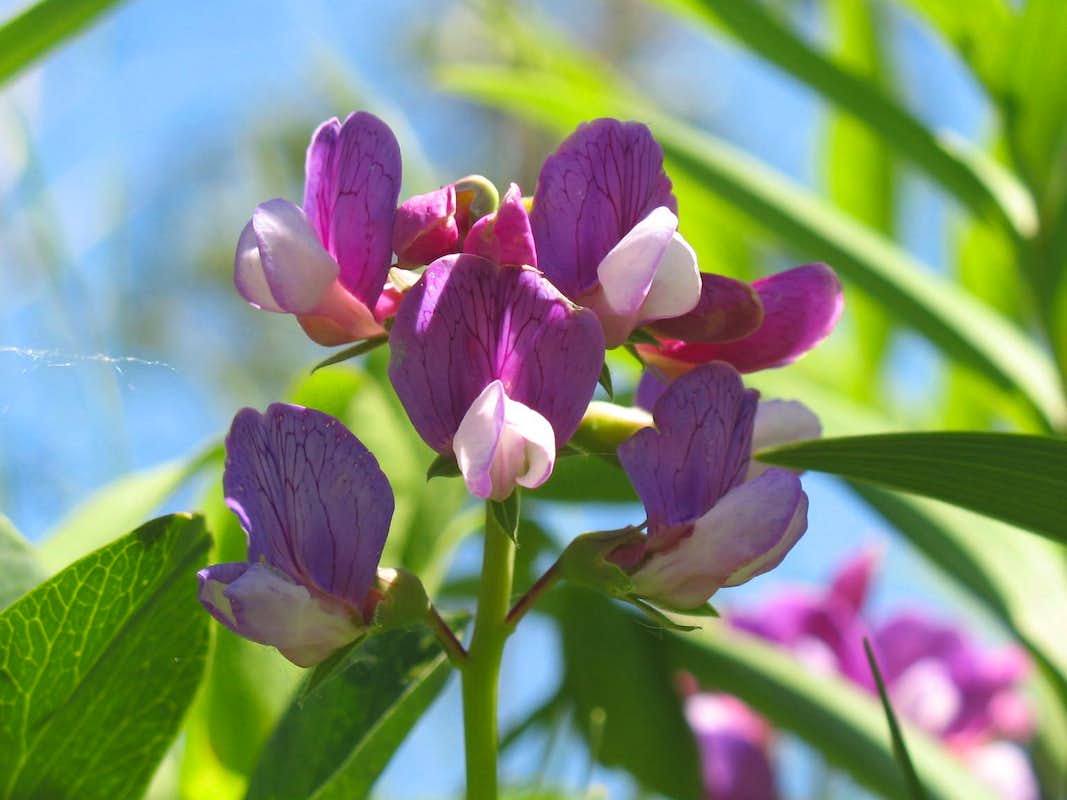 The southern section lies south of Empire. This is perhaps the least visited section on the mainland. As you might expect, this means that to appreciate this section of the park you actually have to get out of your car and walk. The Platte Plains area is a wonderful place escape for a couple days. Also, this section boasts the towering Empire Bluffs as well as the parks other modern campground at the Platte River. 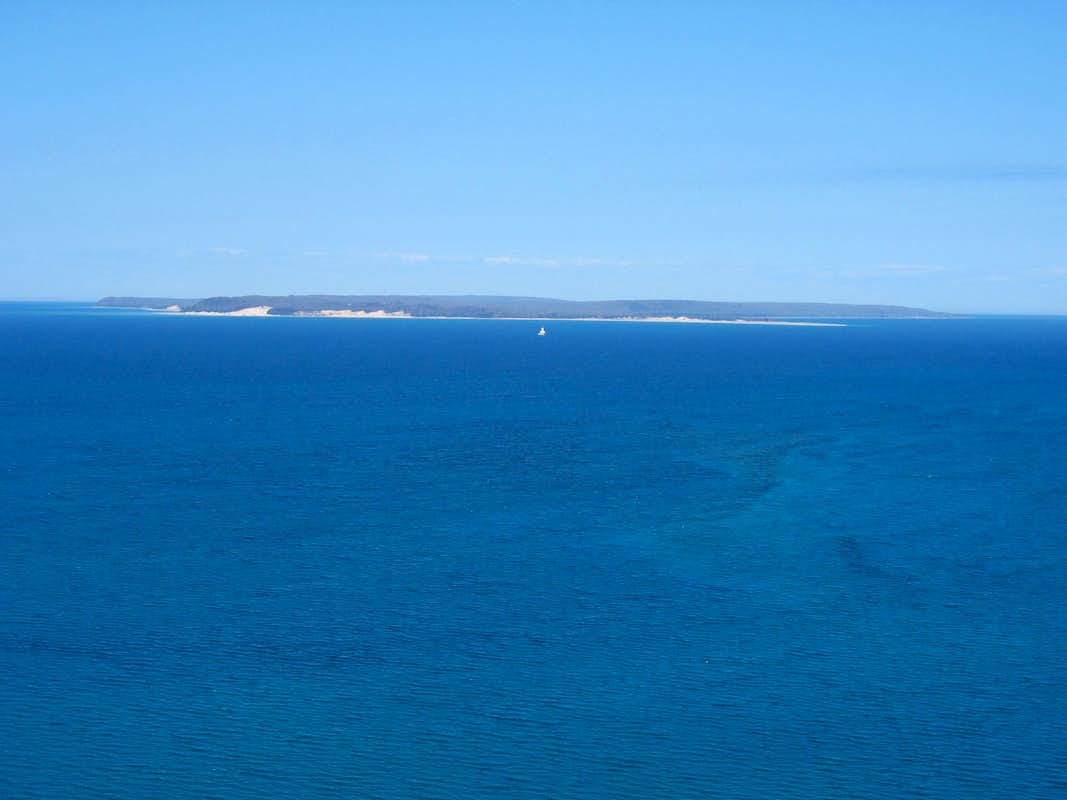 If wilderness is what you want, a trip out to the Manitou Islands should be on your itinerary. North and South Manitou Islands lie about seven miles offshore and, in turn, are about four miles apart from one another. Both islands are clearly visible from the lakeshore, South Manitou with its distinctive white lighthouse and untouched North Manitou lying quietly to the north.

To reach the islands you must book passage on one of the ferries run by Manitou Island Transit. They provide service to and from the islands from late May through the first week of October. As of 2007 it cost $29 for a round trip ticket to either island and reservations are highly recommended. Visit their website for more info.


Of the two islands, South Manitou is the most developed. This is primarily due to the fact that the island was once home to a busy harbor for ships making the run from Chicago to the upper lakes. Still present on the island are numerous old farm buildings, a school house, and one of the tallest lighthouses on the Great Lakes. Due to the short layover time of the ferry at the island Manitou Island Transit runs a motorized tour of the historic areas of the island. Don’t let this discourage you from visiting the island, however. The tours only run for a few hours each day and they miss the most spectacular areas of the island anyway.


South Manitou occupies an area of 5,260 acres (8.2 sq. mi.) and is crisscrossed by 18+ miles of trail. That mileage doesn’t include a particularly scenic option of hiking the 10 mile perimeter of the island along the beach. As the eastern side of the island is rather flat the west and northern edges of the island contain a dramatic landscape of perched dunes rising, in some places, over 400’ directly out of the lake. Also not to be missed, in the southwest corner of the island, is a grove of immense, old-growth Cedars. Aptly named the Valley of the Giants, this area contains trees that are over 500 years old. One particularly impressive Cedar, standing just 90’ tall, has a circumference of over 17 feet!

There are no services on South Manitou; however there is a limited number of places drinking water is available via water pumps. Three backcountry campgrounds provide overnight accommodations. Named Bay, Weather Station, and Popple, they are located on the east, south and north shores respectively.


On South Manitou you will occasionally see the occasional tour buggy and be able to enjoy the convenience of a water pump. On North Manitou you’ll see no motorized vehicles and any water you drink will have to be gathered the old fashioned way. North Manitou is a true wilderness. The Park Service maintains a strict ban on any kind of wheeled vehicle on the island. The only travel here is on foot. As with South Manitou, the island is reached by ferry service from Manitou Island Transit. Unlike South Manitou the ferry only stops at North Manitou five out of seven days during the summer. If you plan on visiting during the week plan on an overnight trip as there is no service on Tuesdays and Thursdays. North Manitou isn’t a good place for a day trip anyways.


The island is around 15,000 acres in size, has over 20 miles of shoreline, and contains 22 miles of marked trails (there are numerous unmarked trails to explore as well). The terrain on North Manitou varies from open dunes at its south end to high forested bluffs at its north end. While the landscape can be rugged, especially to the north, the trails are rarely strenuous. Numerous small structures dot the island and remind you that once upon a time people actually lived here. Please remember though that these are very old and potentially unstable buildings; PLEASE STAY OUT OF THEM. While North Manitou doesn’t contain the striking natural features of its neighbor to the south it more than makes up for this with its pure, simple, unspoiled beauty. The pristine waters of Lake Manitou, the quiet woodlands, and the miles of empty sand beaches combine to make this a truly unique area of Lower Michigan.

The only facilities you’ll see on North Manitou are the ones you can spot as you step off the ferry. The only potable water, outhouses, and designated campground on the island are located at the small “village” surrounding the dock. The campground here at The Village contains 8 sites and has a fire ring. Once you step out into the backcountry you have the option of pitching your tent in whatever pretty little chunk of real estate you choose (as long as its 300’ from any water or structure). 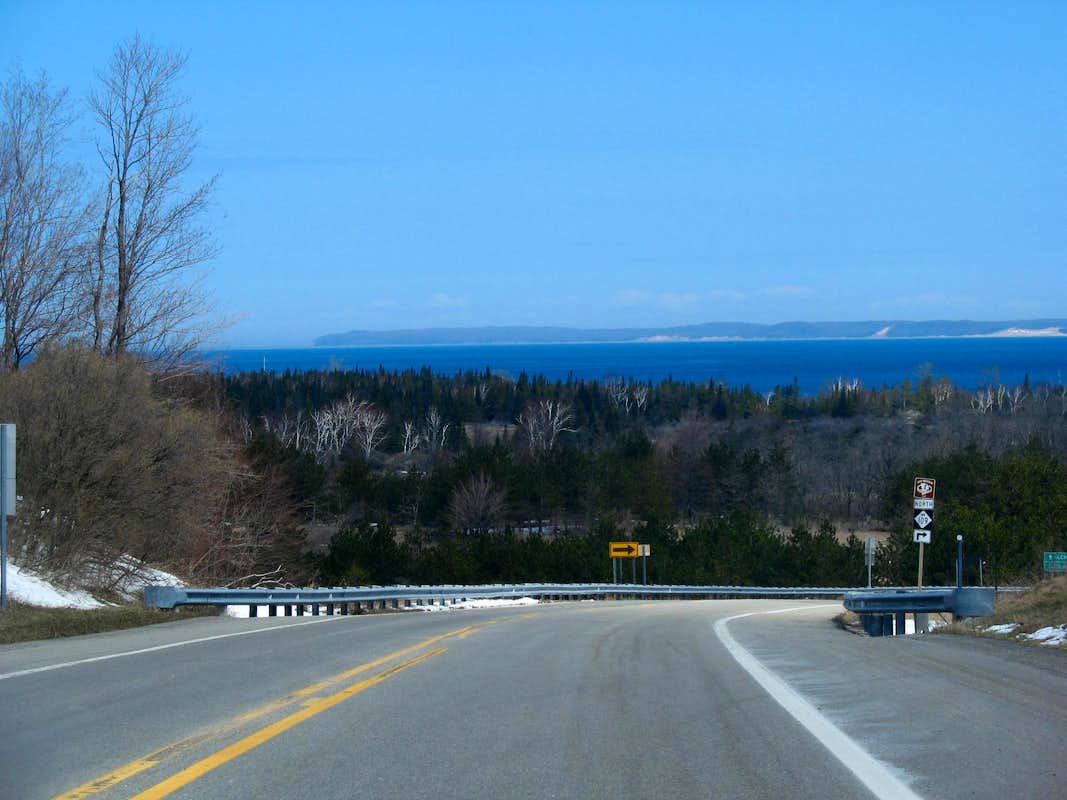 Interstate 75, US-131, and US-31 are the three major highways serving northern Michigan and thus the Sleeping Bear area.

-US-31 follows the Lake Michigan shore from the Muskegon area, two hours south. The drive is scenic but can be slow as for much of the way the highway is a two-lane road. US-31 passes closest to the Lakeshore at the little town of Honor about three miles from the south end of the park.

-Following Interstate 75 or US-131 will route you through the regional hub of Traverse City. Traveling north on either highway, you will want to exit onto M-72 and follow it west to Traverse City. M-72 enters Traverse City at its east end where it merges with US-31. Follow US-31/M-72 through downtown Traverse City to where US-31 turns south. You will want to continue west on M-72 from here another 23 miles to the entrance to the Lakeshore at the town of Empire at highway M-22. The Sleeping Bear National Lakeshore Interpretive and Visitors Center is located on the right as you reach M-22, you can’t miss it.

M-22 is the main artery through the park. To the south of Empire you can access the Empire Bluffs as well as the Platte Plains, Platte River, and Platte Campground. To the north of Empire M-22 makes a beeline to Glen Arbor, bypassing some of the most popular attractions in the park (aka. The Dune Climb, Pierce Stocking Drive, and Sleeping Bear Point). To get to these areas bear left about 3 miles north of Empire onto M-109. M-109 accesses all of these areas before rejoining M-22 at Glen Arbor. Continuing north from Glen Arbor, M-22 passes by the Port Oneida Historic District, Pyramid Point, and the redundantly named Good Harbor Bay. You will reach the town of Leland about 18 miles north of Glen Arbor. The docks for the ferries to the Manitou Islands will be on your left, watch for the signs.

Unlike many parks in Michigan, access to the dunes in the winter is no more difficult than in the summer. All the main arteries remain open in the winter, as well as many side roads. The only areas you may have trouble accessing are the trails off Pierce Stocking Drive, which is closed, as well as the Manitou Islands after the ferries stop running for the season. 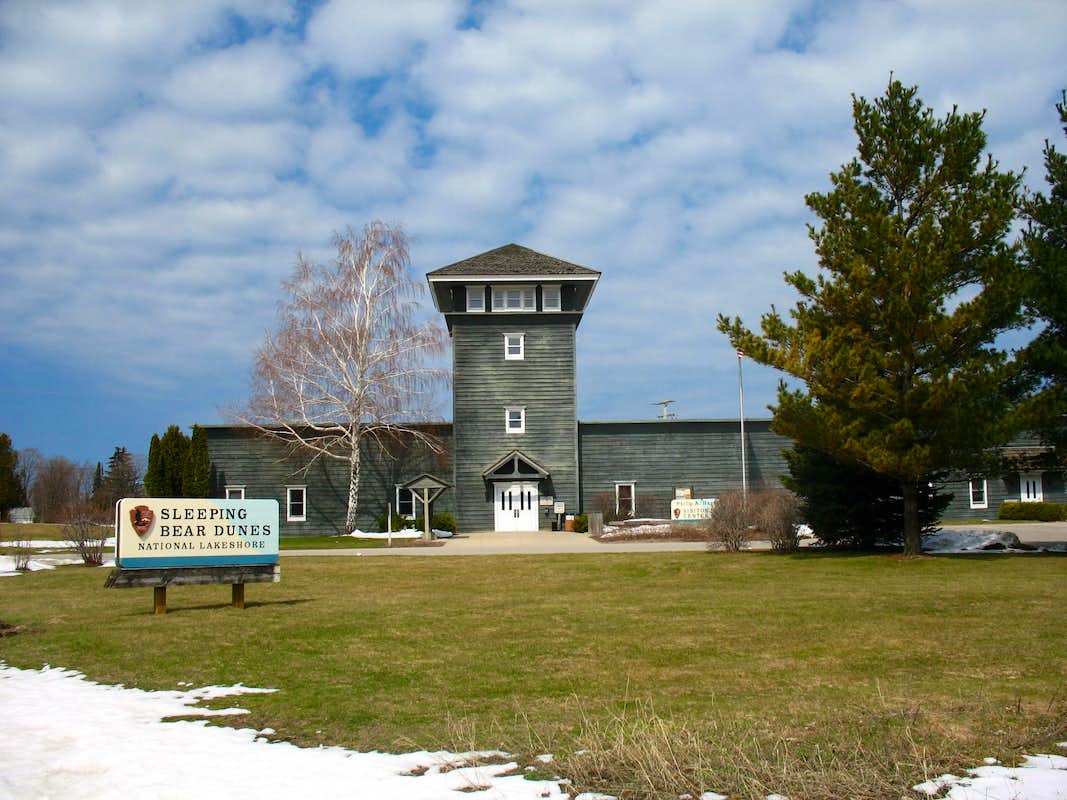 Sleeping Bear Dunes National Lakeshore does require a pass to park or hike within the Lakeshore. As of 2007 the fees were as follows:

DWhike's Adventures - Shameless self promotion...come visit my website for more pics of Sleeping Bear Dunes NL and other places that I have wandered off to in recent years...