Great Smoky Mountains National Park was created in 1934 and now includes around 522,000 acres of some of the most rugged high mountain wilderness in eastern America. Around 9,000,000 people visit the park in a given year. That may be enough to keep most demo phobic backpackers away but consider the following facts…

In a recent survey conducted by the park service only 44% stated their purpose for visiting the Smokies was for a day hike, only 12% stated they were there to camp, and only 2% said they intended to use backcountry campsites or shelters. This means less than half the people who visit the park even intend to get out of their vehicles and 98% would wander no farther than their next meal away from a trailhead!!! To put this in perspective, out of the 24,000-ish daily visitors to the park, only about 450 are in the backcountry! Needless to say, the 400,000 or so acres in the park away from the roads combined with 600+ miles of trails should provide those 450 people plenty of alone time.

The Nature of the Smokies...

Books could, and have been written about the rich natural diversity of the Smoky Mountains. Their mid-latitude location combined with elevations that range from 840' at Abrams Creek to 6643' at the summit of Clingmans Dome creates one of the most complex ecosystems in America. In fact, the park has been recognized as as an International Biosphere Preserve.

The Great Smoky Mountains are home to 65 species of mammal, the most widely advertised is the Black Bear. There are around 600 bear in the park so proper food storage is always a must. Another popular resident of the Smokies, just recently re-introduced, is the Elk. Elk once roamed all over the Southern Appalachians but were killed off by the mid 19th Century. In 2001 the Park Service released 24 Elk in the Cataloochee Valley with more transported in the following years. From what I have heard it has been a stunning success. Other animals that are common include, but are not limited to, deer, beaver, raccoons, squirrels, opossums, skunks, snakes, fox, otter, rabbits, and even wild hogs!

The Great Smoky Mountains most incredible feature is its plant-life. According to the Park Service website the mountians are home to over 5500 known species of plant! There are more types of plant life in the 815-ish square miles of the park than on the entire continent of Europe!!! Taking a walk from one of the lower campgrounds to the ridgetop is the ecological equivalent of traveling from Georgia to Maine! On top of it all the Smokies are home to the greatest concentration of old-growth forest in the east. About 25% of the existing forest is original growth. One of the best places experience this is in the eastern part of the park at Half Acre Ridge , listed below.

Unfortunately, this wealth of biodiversity is very fragile. Numerous diseases and pests(i.e. bugs and humans) have and still do take their toll. Two of the greatest concerns right now are air pollution and the Hemlock Woolly Adelgid, whose work you can see in the immense "ghost forests" atop the Smokies highest peaks. To learn more about these issues you can visit here.

Also, another of the Smoky Mountains most beautiful natural features is its cascades and waterfalls. The mountains are home to around 70 named falls and countless other small cascades. A couple of my personal favorites are "The Place of a Thousand Drips" and the "Ramsay Cascades." You can find a wealth of knowledge by visiting NCWaterfalls.com's Great Smoky Mountains page.

There are just too many peaks in the Smoky Mountains to give descriptions on each. What I will try to do is list those included on the South Beyond 6000 list and a few others of the lesser but more well-known in the park as they are added to Summitpost. Also, surprisingly, many of these peaks do not have trails accessing the summits. For more info on how to reach them visit the Carolina Mountain Club’s SB6K - Smoky Mountain page here.

The peaks listed here are those currently with pages at Summitpost. I will try to keep this updated if more are added. 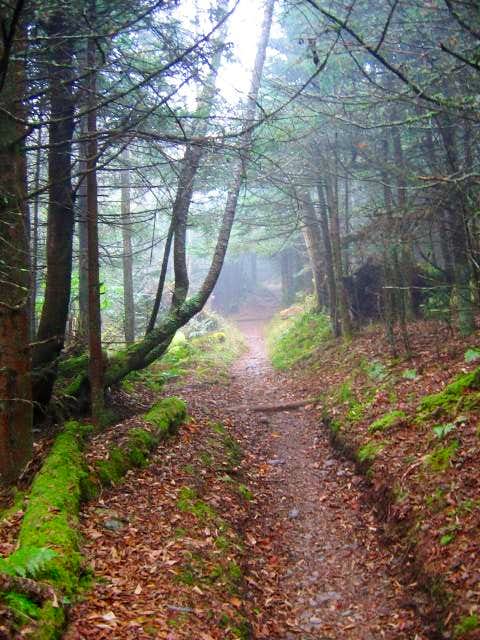 Great Smoky Mountains National Park has something on the order of 800+ miles of trails. I won’t try to list all of them here but I’ll hit the major ones. To help locate the trails listed below I suggest downloading the NPS Trail Map .

The Appalachian Trail follows the spine of the Smokies for 71.4 miles. It is, therefore, the workhorse of the Smoky Mountains. It enters the park at Fontana Dam and spends the next 7-ish miles climbing to the ridge at Doe Knob (4520’). From here it follows the spine of the Smokies, spending most of its time at elevations in excess of 5000’, reaching busy Newfound Gap at mile 37.4 and dropping from Mt Cammerer (4928’) to Davenport Gap near I-40 30-miles later. It is one of the premier stretches on the entire AT.


Twenty-Seven Trails access the AT on its trip through the Smokies. From south-to-north they are…

Worth mentioning also is the Lakeshore Trail . This trail never gains the ridge but is a trailhead for numerous trails in the western half of the park. The trail is 35 miles long and follows the north shore of Fontana Lake from Lakeview Drive to the Fontana Dam area. Despite its name it very rarely gets near the lake. It is one of the newer trails in the park and not as well used, which may be attractive to some. 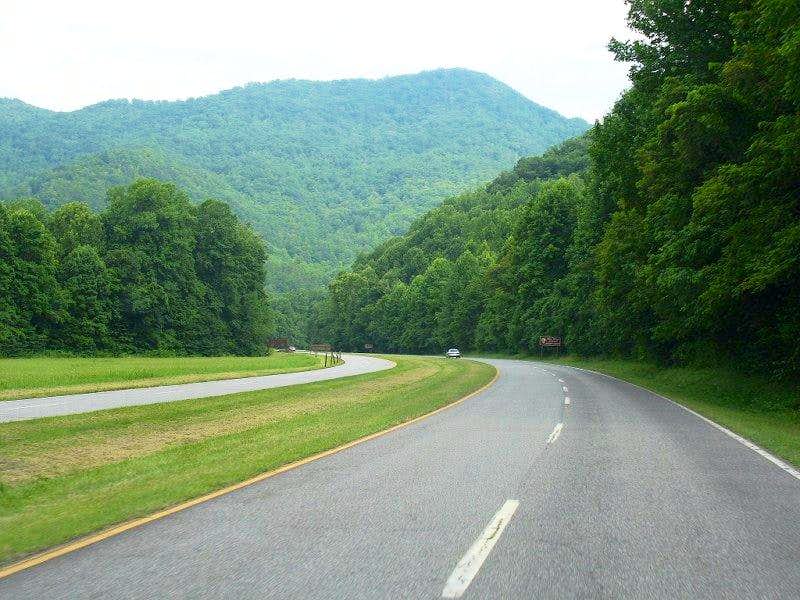 The rest of the roads in the National Park tend to stick to the edges; counter-clockwise from the Gatlinburg area they are: 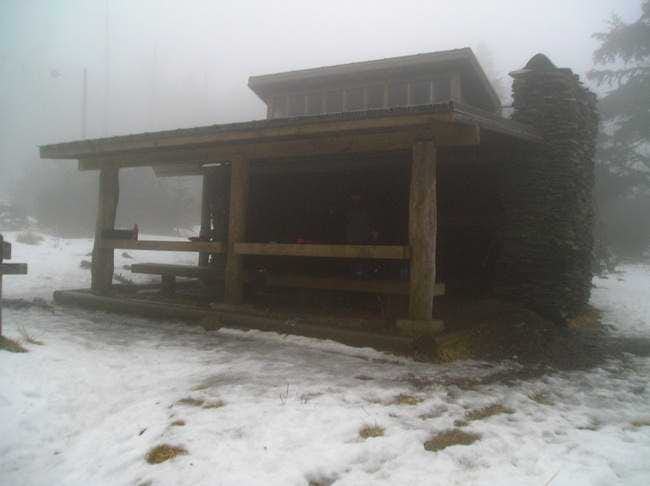 The 114 backcountry campsites and shelters are your only choice for staying overnight in the backcountry of the Smokies. Camping elsewhere is prohibited. To stay in the backcountry you also need a free permit which you can obtain at just about any Ranger Station or Visitors Center.

AT Shelters – South of Newfound Gap...

AT Shelters – South of Newfound Gap...

Shelters not on the AT... 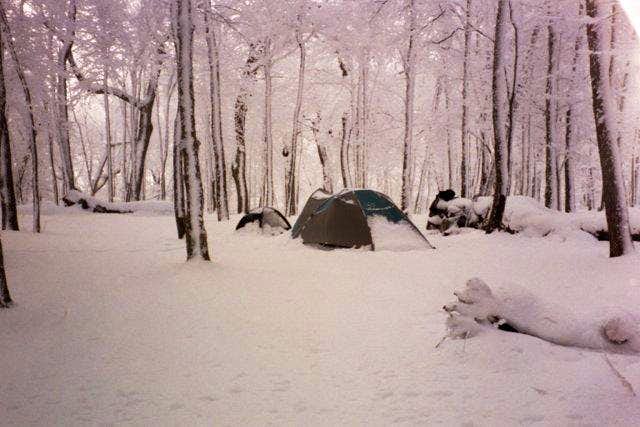 Backcountry Campsites North of the AT…

Backcountry Campsites South of the AT…

Front Country Camping is available at 10 sites around the perimeter of the park. Campgrounds have showers and flush toilets but no electricity or water hookups.

NCWaterfalls.com - The best waterfall site I know of. Excellent info and photos from all over the Southern Appalachians.

DWhike's Adventures - Shameless self promotion...come visit my website for more pics of the Great Smoky Mountains and other places that I have wandered off to in recent years...

Excellent idea, It's a great website I use quite a bit. I'll try to get it in there as soon as I can. Thanks for the tip! -Dan

I posted a page on Mount Guyot. You can link to it if you like, thanks! Best, Eleutheros

Here is the current link I believe: http://www.nps.gov/grsm/planyourvisit/upload/trail-map_JULY13-full.pdf Thanks! Kathy