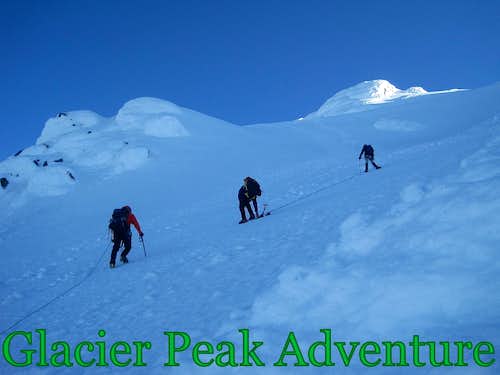 "In every walk with nature one receives far more than he seeks." -John Muir

"Me and Pavel like to Travel
Glacier Peak is not for the weak, but a trip of hard endurance
As we slog through the snow, we say again "here we go"
As I sweat and soak my garments, I see I am in a land of Marmots
The mice at camp come to steal in attempts to get a nice meal
That night we slept quite well, and by morning I felt quite right
Over the snowy pass we go, not a single blade of grass
By now I feel quite tired, but at the same quite wired... for the adventure that is
As we travel for hours to the top, I see around we are surrounded by rock towers
We soon reach the top, and are over joyed and hop
Going down was quite tiring, but at least by camp the stove was firing
The food gave me what I need, to finish the deed
Getting back was quite long, but at least nothing went wrong.
I had such a blast, that I wish it had not been so fast."
-Glacier Peak Adventure

After having a fun party on the Forth of July, I was offered to climb Glacier Peak. Michael was too sun burned from Sahale to join. Before the trip, my boots were still soaked from my previous adventure, so I had to go outside and use a hair dryer to dry out my boots. At 7 a.m. Pavel arives at my house to pick me up. On the way we stopped at the ranger station to investigate the route better (which was a great call, the route we had lined up possibly had a washout with river crossing). From here we still had not fully made up our mind on which route to make, but later at White Pass made the choice. On the way to the trailhead of the North Sauk Pavel buys both of us some nice breakfast which was very generous.

At the trailhead we put on our packs, which were quite heavy. For some reason going to White Pass did not sound like much "it's only 9 miles" I thought after traveling 1/2 a mile. After a while the pack and the heat made it more tiring, and energy draining, but we both were doing good. The North Fork Sauk River reminded me of a jungle because there were leaves a few feet across, it was hot, and very humid. At first the bushes were nicely cut, but later we had to plow through some tall grass and such. 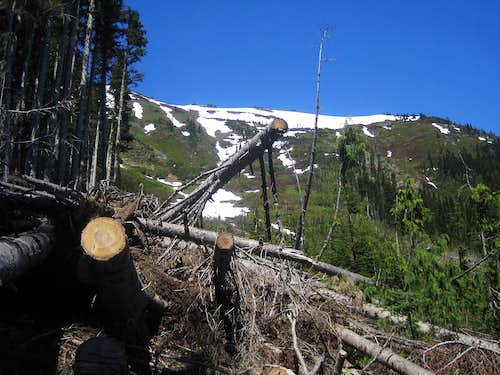 Looking up White Mountain from the Woods 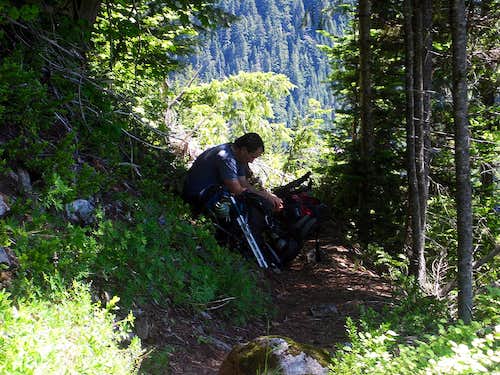 Pavel taking a rest
When we reached snow, we followed some foot prints which lead to nowhere. I decided to look around for the route, Pavel used his GPS and found the trail to our left. I decided it was time to throw on boots (to prevent my feet from getting wet), which was a good call. There were a few creek spots which you have to traverse under, but isn't that bad. We saw a few marmots and some marmot holes. At White Pass we decide to take the standard route, considering there was an easy to follow boot path. 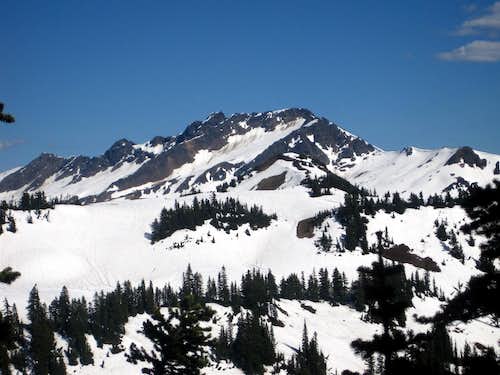 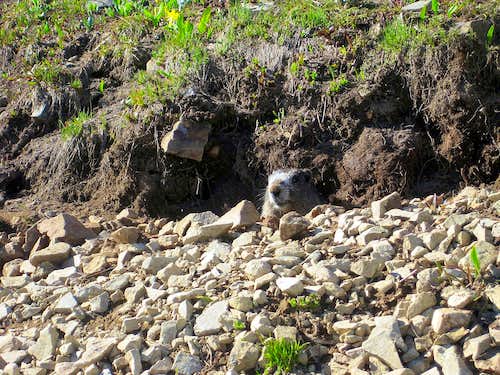 Marmot on the Watch 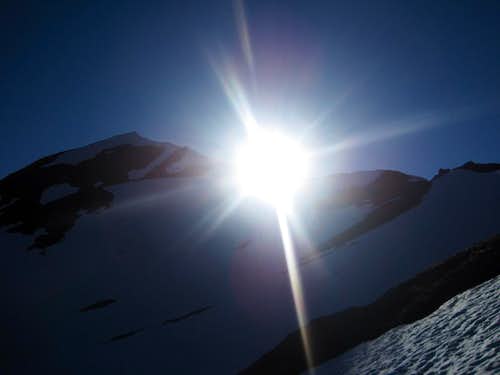 Sun setting over White Mountain
We traverse the bottom of a mountain and get to the next pass. From here we get our first glimps of Glacier Peak. Blow was The Plug, or as Pavel says "Ze Plug". We had to go off the route by going down hill, and then up hill, but it was worth it. There was a nice place to camp with a 360 view around. I could see two marmots, one racing the other, and another on the way up. One could call this place the land of Marmots. As the sun fell behind the ridge, Pavel cooked dinner, and gave me some hot chocolate. When I burped, I told him "If you mind me, let me know" but he was polite and told me "It's a Free Country". By this time, I really felt like I was in true alpine lands. There were few people within a 10 mile radius. We had the whole spot to ourselves. Evening was also nice. Soon we went to sleep. 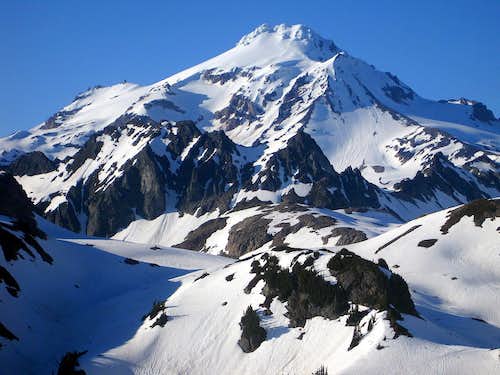 Glacier Peak from our Camp 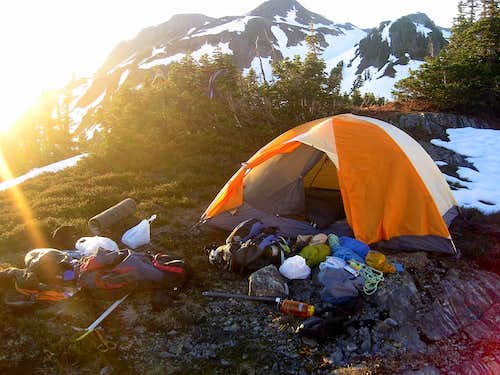 Our Camp During Sunset 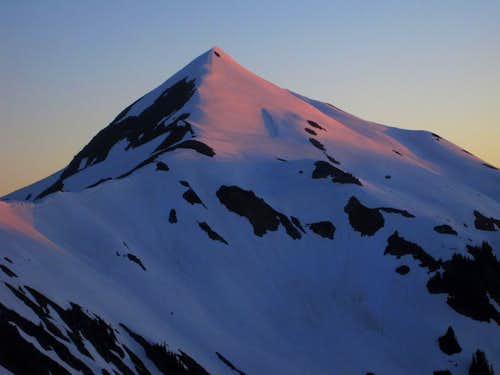 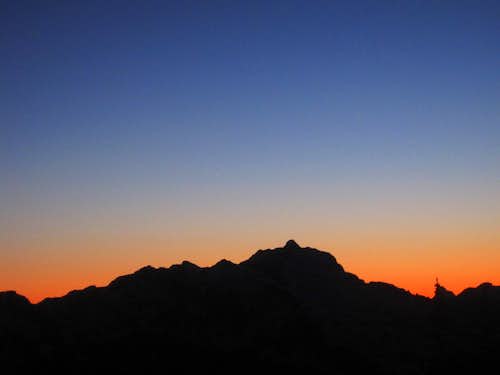 We woke up some what late the next morning, the sun had already made the outside air warm. We packed up our gear, and headed down the Plug to the next pass. It was a new feeling of mountaineering, going up 1,000 feet no longer felt like much of a deal like it had in the past. We met Mark and Chris (we met them the night before) and agreed that perhaps we should be close together when traveling on glacier. Once we passed Glacier Gap, they found a nice camp sheltered from the wind. Now Glacier Peak was right in our faces, and we could see Mount Maude as well as many others. One could say this was our "relax day". 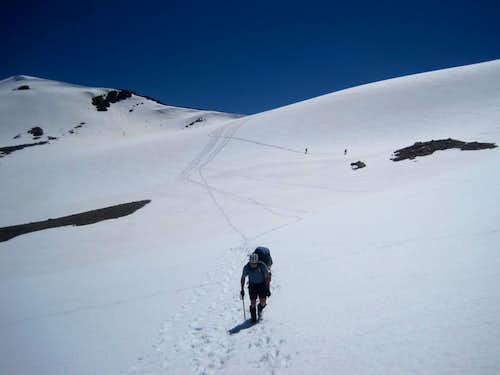 Pavel on the Travel 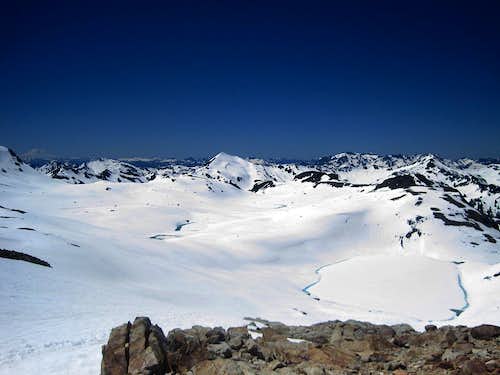 Looking Back towards White Mountain 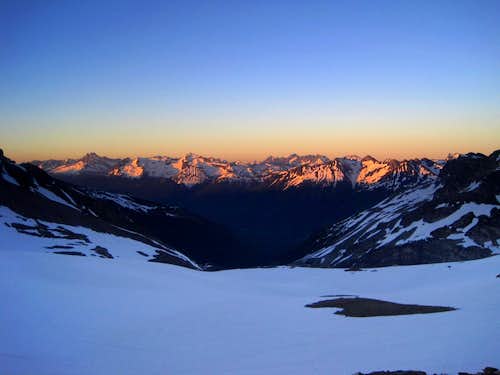 Sleep did not come as easy this night due to the rocks under the tent, although I managed to get some sleep. Mark and Chris woke us up at 3 in the morning to get ready and climb to the summit. There was already a little morning light. I only needed my headlamp for a short time. There was some winds on the lower ridge, which forced me to layer back up from a short sleeve shirt. We decided the best route for going up would be to traverse under and around the Disappointment Peak. 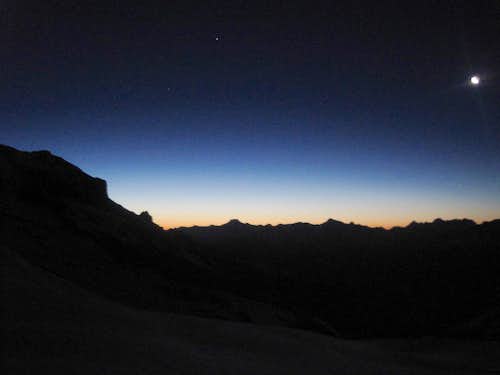 Early in the morning

The Sunrise from the Glacier
We roped up, and it was interesting to see we had to travel through some avalanche debris. Only a few crevasses had to be passed, from here we were below the summit. On the other team, one of the guys crampons kept falling off. "I knew I should have not brought the free crampons" said one of them. Fortunetely they got it figured out, and we were able to head on to the summit. I only recall one steep spot, which Pavel told me to low dagger it which I did so. Soon we reached the top. 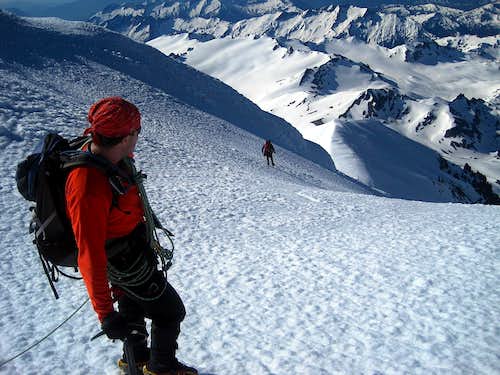 Looking back Down
I was quite excited when I reached the top, we took some photos, had some food, rested and such. I could see all the way from Mount Stuart to Eldorado Peak. But we had to get down, the sun was melting the snow, and we did not want to travel back with tons of slush. I found out on the way down there were more crevasses than I had noticed, even near by our snow prints. We saw a skier heading up solo, which we all thought was a little crazy, but I suppose he was experienced. The other rope team kept cracking up jokes, which I found entertaining, I almost wish I had a recording. 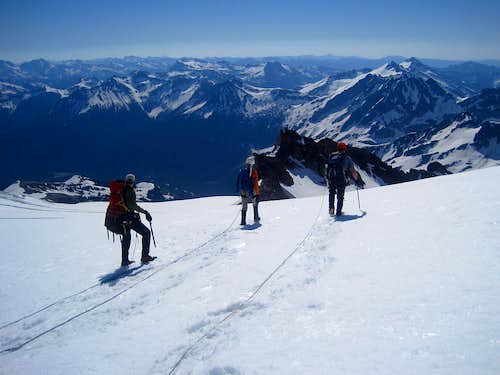 Traveling along on the Cool Glacier
We got to camp, which I was feeling quite tired. I took a nap for a while, Pavel boiled some water, and gave me some food. We packed up the tent, and said good bye to the other climbers, it was now time to head home. Heading back was harder than heading there, the sun was just making the place feel so hot. I drank plenty, applied sunscreen a lot, but it just did not seem like enough. I call this part of the traverse "the oven", even though it is snowy, it was very hot. I took off my Sun glasses for half a minute, and realize how quick sun blindness could get to you, it was just all white around. Miles and miles of slogging through the snow, but as always, regardless of the difficulty, I was still having fun. 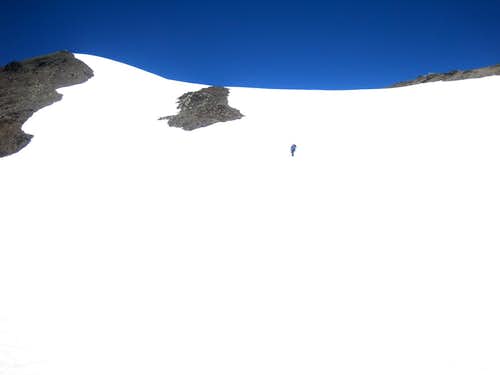 The Oven part of the Trip
When we reached the plug, the skier we saw passed us, although he had to stop at the top of the hill and decided to spend the night above. When we got to White Pass, I was excited, "only 9 more miles" I thought. Turns out those nine miles dragged on for a long time. Fortunately Pavel had a filter which we filtered some water for the rest of the way. 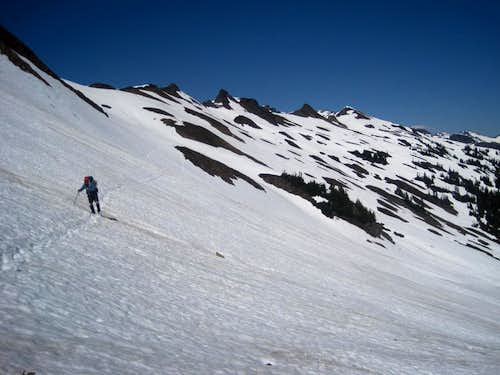 Traversing White Mountain
Going down kept going on and on, even when we were the last few miles from the car, I was amazed at how long 1.5 miles can feel when your tired. We reached the car by 11 p.m. Pavel then drove me home. At 1 a.m. we went out to find a resturant, which most were closed. "What is this Russia?" Pavel said as we kept looking for places to eat, but fortunetely Denny's was open. After this, he dropped me off home, and off to bed I went. This was an amazing adventure, Pavel was an awesome partner, and he was very generous, I hope to go with more trips with him in the future. A classic trip indeed!

At the end of the Journey

Great Photos! It is a really beautiful area!
Congrats on the summit! we got turned back at the saddle between Disappointment & Glacier.

Re: Another Good one

I'm curious as to what happened when you went. I went for another trip later that month with my friend Gimpilator. It was certainly a beautiful area, I would love to return to Glacier Peak this summer. Cheers Josh Lewis.

Glacier Peak is a long way from anywhere

Indeed! Especially now that the Sauk River Road is washed out 10 miles from the trail head, I sure hope that the road damages get fixed. If not I suppose I could go up another route.