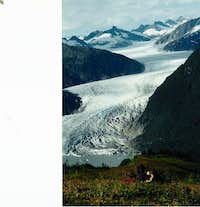 Relaxing in the alpine 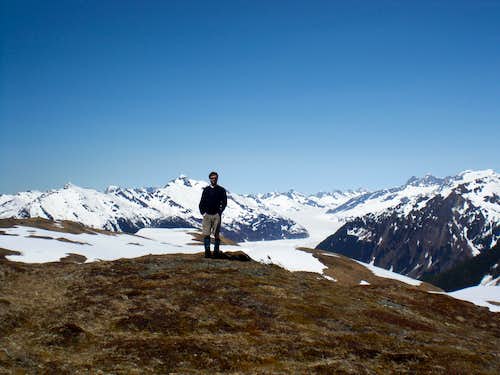 Thunder Mountain looms over Juneau's Mendenhall Valley and is named for avalanches that crash down its steep slopes in the winter and spring. This is the shortest of the five most popular mountains in Juneau (The other's are Mt Juneau, Mt Roberts, Mt Jumbo and Mt McGinnis), but the hike is steep and will probably take at least half a day, longer if the blueberries are ripe.

As with all of Juneau's mountains, hikers enjoy a variety of vegetation zones as they ascend. The trails start out walking through rain forest, then muskegs and eventually the alpine. Once the trail rises above treeline, commanding views of The Valley, Auk Bay, Lynn Canal and Douglas Island reward tired hikers. The top affords a particularly great view of the Mendenhall Glacier and the surrounding mountains, assuming you hike on a rare clear day.

Thunder Mountain slopes down from the top in a long ridge towards the glacier. A lush bowl lies between it and another ridge, Heintzleman, which continues up above Thunder Mountain to Nugget Peak and the Juneau Icefield. A goat trail leads up Heintzleman and though the ridge is beautiful I don't recommend it for most people. One Juneau trail guide warns that it is fit only for mountain goats. There are potentially lethal drops on both sides and it culminates in a dicy step of dirt or mud that has gotten steeper and steeper over time due to erosion. From the first summit of Heintzleman you can follow a ridge and bushwhack down towards the nugget creek trail to the North if you don't want to retrace your steps. 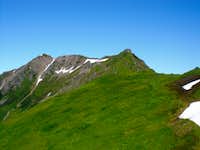 A flat but exposed section of the goat path.

A variety of flora and fauna share this mountain with the visiting humans. The trees are predominantly hemlock and spruce with alders in avalanche paths and a few cedars on northern slopes. Devils club abounds so look before you grab, skunk cabbage lines the often muddy trail and alpine flowers poke through the snow starting in late spring . Mountain Goats, marmots, bears, ptarmigan, eagles and ravens frequent this area and lucky hikers have seen wolves as well. Don't expect a quiescent wilderness experience in the summer as helicopters fly over Thunder Mountain to carry tourists to the glacier.

There are two trails that converge after nearly two miles

If you find yourself off trail be very careful of cliffs. At least one person has died after getting lost on this mountain.

One trail begins at about mile 7 on Glacier Highway, in a parking lot with a gas station, just north of the DOT building. There is a pull off on the opposite side of the road to park in. This trail is the muddier of the two.

Another trail begins at the end of Jennifer Drive behind Glacier Valley Elementary School. Follow boardwalk over swampy terrain until it intersects a dirt trail. Take a right here and the Thunder Mountain trail turns left and up just after a small stream. This trail is a bit steeper.

The intersection of these two trails is now signed and heavily flagged.

A third "trail" ascends the back of Thunder off of the East Glacier Trail. It follows a jagged, rusty pipe (an old mining relic) and eventually fades out higher up. This route goes through extensive muskeg so it's probably most pleasant in the winter. Avoid this route if you don't feel like route finding. 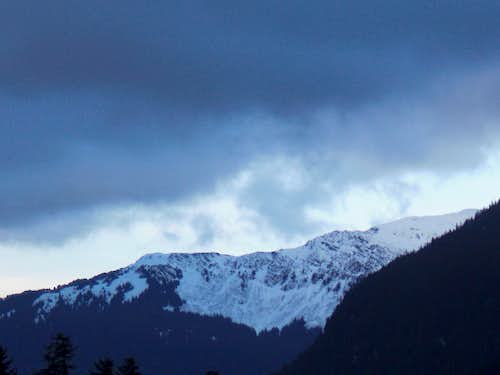 Thunder and Heintzleman from the DOT side. 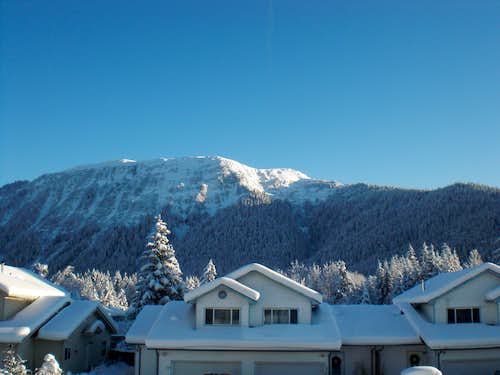 But pink tape marks the trail in some places.

Thunder Mountain offers great camping on the summit and in a few spots along the trail.

If you make a fire please don't burn live trees and keep it away from the trail.