Being part of the Catinaccio group the Torri del Vajolet (Vaiolet towers) are probably among the most photographed peaks in the Dolomites (just after Tre Cime di Lavaredo / Drei Zinnen). Together there are ten summits, roughly divided into two subgroups. The six northern ones are rather massive, while the four southern ones are fine needlelike spires.

Their beauty and the fact that a very popular Via Ferrata (Ferrata Santner) leads close to their base attract thousands of tourists each year as well as a lot of serious climbers again making the Southern Vaiolet towers the most climbed peaks in the Dolomites. This is partly due to the fact that the Normal routes are relatively "easy", mostly in the IV-range. The Delago Tower is the Westernmost, the Stabeler Tower is the central one and the Winkler Tower the Easternmost. On the contrary the Northern Vajolet Towers are rarely frequented. 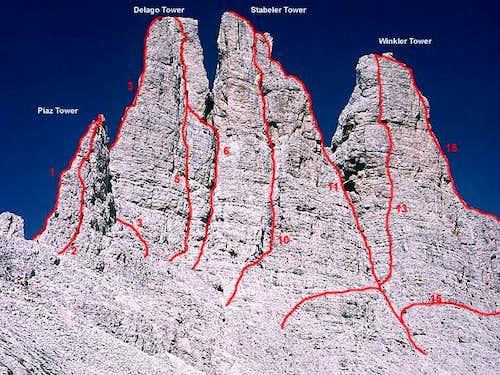 Route overview - please note, that the routes are approximate.

In contrast to the rather unknown northern Vajolet Towers the four southern ones know a lot fine routes. Most interesting - and thus most popular and crowded - is the route along the southwestern ridge (Piaz Ridge) of the westernmost Delago Tower. If you look at the signature pic you can see why. Though a relatively short climb, it is very exposed. Always keep in mind that the tops of the towers are approximately 2000m above the town of Bolzano / Bozen in the near distance.

The three large towers all have quite a number of routes in various difficulties, mostly of 120 - 150m length (mostly four pitches). The smaller Piaz Tower has two routes of each 60m length. Look at the route picture to see (most of) the approximate routes.

The Vajolet Towers can be reached from both sides of the Catinaccio / Rosengarten Group. The eastern side is the more convenient since you can hike or drive (by taxi jeep) up the Vajolet Valley to Rifugio Gardeccia which is the best starting point for any exploration of the group

Eastern Trailhead: Gardeccia
Take the Brenner Motorway A22 up to the exit of Bolzano Nord/Bozen Nord. By the road S.P.241 drive along Val d'Ega/Eggental till Pera, place between Pozzo di Fassa and Mazzin. Pera can be reached also by the S.S.48, taken from the Brenner Motorway A22 exit Ora/Auer. At Pera the road into the Vajolet Valley turns off to the left (west). Access is restricted. You either have to hike or take one of the taxi jeeps at Mazzin that will get you to Rifugio Gardeccia.

From Gardeccia take the Vajolet Valley upwards to Rifugio Preuss and Rifugio Vajolet. Here the steep ascent to Gartl at the base of the Vajolet Towers starts. The scramble is quite demanding but never exceeds grade I (iron ropes help the ascent).

Western Trailhead: Rosengartenhütte / Rifugio Aleardo Fronza
Again take the Brenner Motorway, but this time a little furthe until the exit Prato / Blumau. Here get on SP65 and get all the way up to Nigerpass / Passo Nigra. Some 2km after the pass at Frommer Alm there is a lift to Rosengartenhütte. The starting point is reached also by SP241 (Mortorway Brenner exit Bolzano/Bozen Nord). Before Passo Costalung/Karer Pass the road turns left towards Passo Nigra/Niger Pass. Few hundredsa meters before is Malga Freommer/Frommer Alm. From here take the chairlift to Rifugio Fronza and then the Ferrata Santner to Santner Pass where you get the first glimpses of the southern Vajolet Towers. As stated above the eastern trailhead is to be preferred but if you want to visit the area without climbing the towers this western approach is surely the most beautiful.

The route from Pera to Gardeccia is always closed. Take one of the taxis or hike up to Gardeccia. Otherwise there are no restrictions that apply.

Again, like with all Dolomite summits June through September are the best months. In some years May might already be feasable and October as well. Always remember that in Italy August is the general vacation month. The region will be very crowded. You might have to queue up to do your pitches on the Delago Edge. 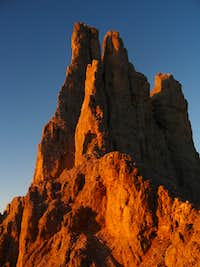 Sunset on the Vajolet towers

In early summer sometimes part of the Ferrata Santner is still covered with ice. It can get quite difficult and dangerous. The same holds true for the steep scrambling ascent along the Gola delle Torri towards Gartl. This trail is located directly to the north of the mighty Rosengartenspitze / Catinaccio and never gets much sunshine.

The following mountain huts / refuges can be found in the Catinaccio / Rosengarten Group. The refuges are (roughly) sorted by their proximity to the base of the Vajolet Towers. In the most crowded months (July and August) booking your bed in the refuge is highly recommended, mainly in the week-ends. Furthermore, as in many other area in Dolomite, groups (for example belonging to climbing courses) usually spend few days in the refuge (such as Rifugio Re Alberto) at the base of their targets, so that is preferable to check in advance the bed availability.

Depending on the side from which you start your exploration of Catinaccio / Rosengarten and the Vajolet Towers you can easily find hotels and apartments at Val di Fassa (east) or Eggental (west). Keep in mind that over the summer accomodation is rather hard to find in this area - most of us who have been there consider it the most beautiful area of the world.

You can get the neccessary info on both sides of Catinaccio Rosengarten from the following web sites (both only in Italian and German):

If web sites aren't enough for you and you want to do it the oldfashioned way, here are the addresses of various villages on both sides of Catinaccio / Rosengarten:

You can find the following campgrounds in Val di Fassa:

If you ask the refuge owners you most of the time are allowed to camp outside, especially in summer when the refuges are overcrowded.

Weather conditions in South Tyrol: www.meteoalpin.com. For the English text you have to scroll down the right frame.

Again I am having trouble naming books in other languages than German. I welcome any helpful addition.


Maps
I have been using the maps by Kompass Verlag: