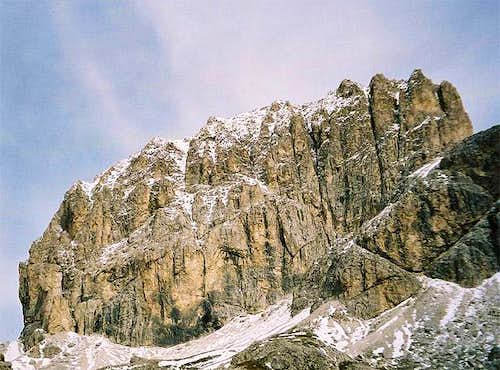 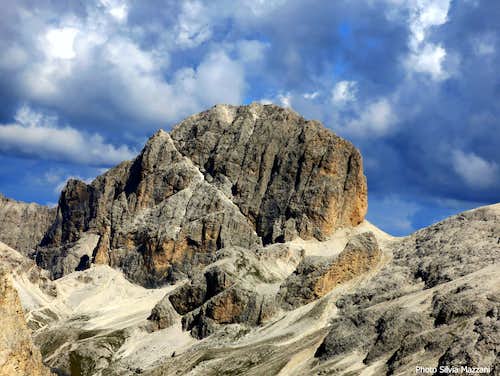 Piku - From the north, over Molignon Pass 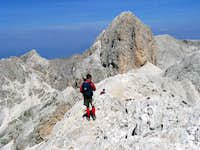 Catinaccio d' Antermoia / Kesselkogel is the highest mountain of one of the most beautiful groups of Dolomites - Rosengarten. This peak falls on all sides with steep, nearly vertical walls. But it nevertheless has some weaknesses - ledges are cutting vertical walls and thus allowing ascents. If Kesselkogel is the highest mountain, it is not the most beautiful one in the group. Yes, kings are ruling their neighbourhood, but they are also surrounded by elegant queens (Rosengartenspitze), and by knights (Vajolet Towers) who are more often photographed and admired.

The mountain has its Italian/Ladinian name by a landscape east of it. There is Antermoia valley with a beautiful lake around which still an old legend is whispered. By it, Antermoia was a girl who had to separate from her lover. Her tears filled a mountain basin and so the lake still today has her name.

Although the ascent is not easy and takes you the whole day, in summer Kesselkogel is often ascended. One marked route to the top leads from east, another one from west. The popularity of Rosengarten group means also many mountain huts and in summer crowds of hikers and other tourists also in high valleys. Especially around the hut on Grassleitenpass there's allways a crowd, watching climbers just above their heads. Luckilly the Vajolet valley, the main one in the group offers also many other magnificent mountain monuments, so people spread around. The eastern part of Kesselkogel is a bit more quiet, although there's also a hut near the beutiful Antermoia lake. And on the southern side of the mountain there is a mysterious and beautiful Larsec land, where you will meet only a few mountaineers. The northern part of Kesselkogel is the wildest one, shattered in many walls and ridges. 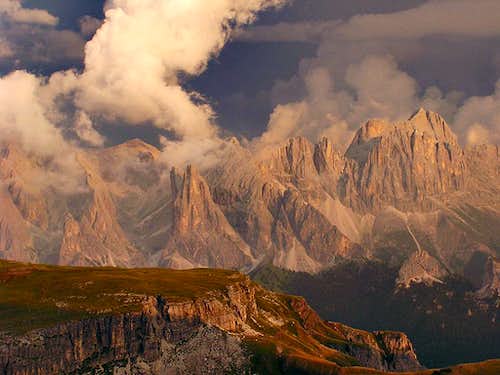 People can tell that in »Gartl«, where nowadays the slopes of the high valley between Rosengartenspitze, Laurinswand and Vajolet towers are covered with talus, once there was a wonderful rose garden of Laurin, the dwarf king. When the king of Etsch country wanted to marry his beautiful daughter Similde, he invited all noblemen around, except King Laurin. But that one had a coat with a miraculous hood which enabled him to participate as an invisible guest. Seeing Similde he immediately fell in love with her, put her on his horse and ran away. All noblemen followed him, led by Dietrich from Bern and his armorer Hildebrand. Soon they arrived to the rose garden. But King Laurin also had a miracle belt which gave him the strength of twelve men, so he accepted the battle. But he had to realise that despite of everything he will not win. He pulled on his invisibility coat and ran here and there across his rose garden. But the Knights were able to follow him, because they observed where flowers were moving. They grabbed the dwarf king, destroyed the magic belt and took him in captivity. For the last time King Laurin turned back on his beautiful garden and roses which had betrayed him. He spelled a curse, that neither by day nor by night a human eye should ever see their beauty. But Laurin had forgotten the twilight, and so it is that people even today in mornings and evenings can see high in the walls of Rosengarten massif the blossoming rose garden of King Laurin. 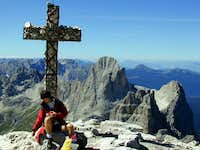 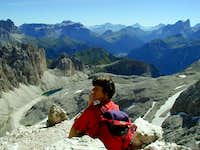 Being the highest summit far around, Kesselkogel offers an immense panorama. Wonderful is the view on Catinaccio/Rosengartenspitze, which looks like a giant shell, rising high above the rose gardens of King Laurin. Towards the west, the first higher mountains are only in Brenta and Ortler Group, so the view is completely opened. In a nice day Brenta and Ortler summits can be clearly distinguished. As Rosengarten group is nicely seen from Bolzano and its surroundings, so from the summit of Catinaccio d'Antermoia / Kesselkogel the green valleys around this town and Adige river can be nicely seen. Also towards the north the views are quite open. Above the rugged near mountains of Catinaccio/Rosengarten group the views fly as far as to the glaciated mountaind of Central Alps. Extraordinary is also the view towards the east and south, where all the major groups of Dolomites can be distinguished. Especially Marmolada is seen bold from its profile. 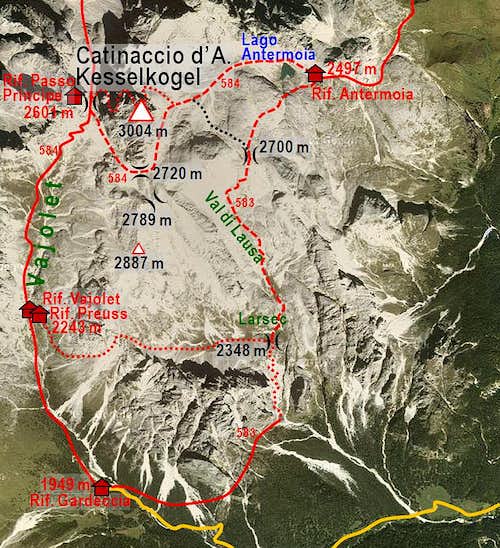 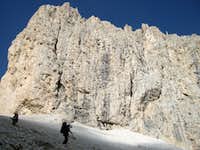 The majority of mountaineers arrive from Val di Fassa. From Vigo di Fassa up to Ciampedie (1998) runs a cable car. The road into Valle del Vajolet is closed for public traffic on the altitude of 1500m, so you must either walk or take a mountain taxi. I'm not sure, but probably mountain bikes are allowed, so you can take advantage of the road, ascending to Gardeccia, 1960 m. Other possibilities to approach the base of Kesselkogel are much longer, although there are mountain huts all around, which give you the opportunity to make various two day tours. There are two marked routes to the top:

1. From the west (from Grassleitenpass) there is a medium demanding ferratta (steel-cable route), following the ledges over almost vertical walls. One good hour (if there is no crowd).

2. From the east you hike from the Antermoia lake (2490 m) up to the height around 2650 m, where steep walls begin. But from right to left they are cut by a quite comfortable ledge, which the marked route uses. Also this route is made safe by steel cables. One hour and half. Of course the crossing of the mountain is highly recommended, especially because you can always come back around the mountain via Passo Antermoia, 2720 m, on the south side of the mountain. This pass is also used by those, who decide not to climb the top for any reason, but still want to arrive from east to west or vice versa.

Except the closed road into Valle del Vajolet there are no limitations.

See some more information on the Rosengarten group page. If you have information about this mountain that doesn't pertain to any of the other sections, please add it here.