Tyed up in Adventure

Eastking and I had been without adventure for a while, plus with my foot hurting that did not help me out. (Normally I run to make up for lack of hiking but I could not) Eastking once again picked me up from my house and we drove on over to Steven's Pass. When we got over the pass we could not park at our original trail head plan due to lots of snow and such so we decided to drive back to Stevens Pass. 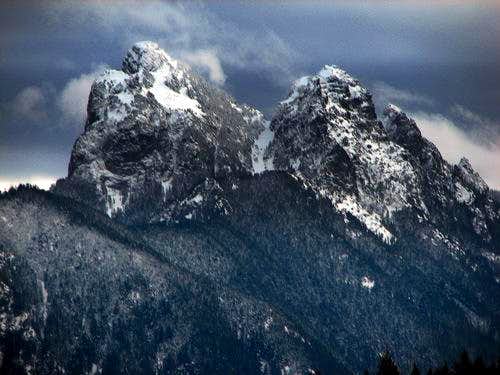 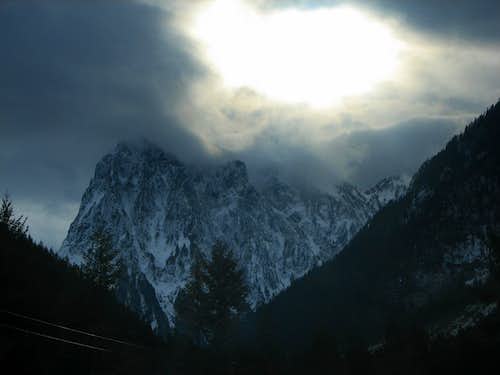 Mount Index Shining brightly
The hike started out pretty nice, we were making good progress up the mountain, weather was not perfect, but what do you expect in December? At Skyline Lake we busted out the snowshoes which I was impressed that there was still some broken trail. At the lake I saw ski tracks crossing a section but I told Eastking I did not want to pull another Wright Mountain stunt so we crossed around the lake, although still on the edge of it. 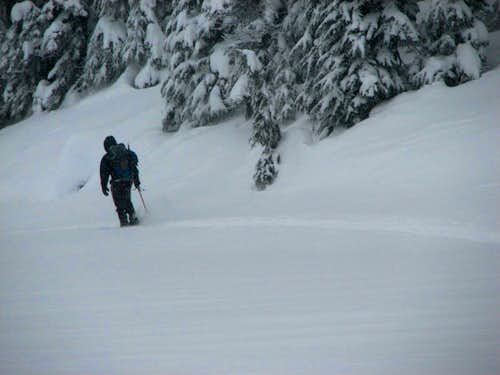 Eastking leading the way
After the lake we went a short distance over a little bump in the ridge and were able to start the descent for getting in the other valley. Once we got down the slope it felt lovely traveling through winters wonders, it was snowing but it had a gentleness to the place. 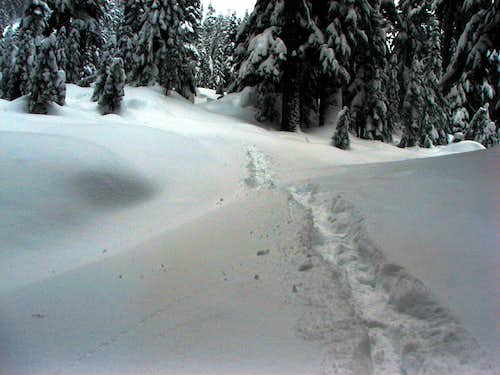 The Snow Tracks behind me
After traversing the slope a ways we once again started to ascent Tye Peak. As we went up I was impressed at how wind blown the slope was which made it easier for traveling. We ditched our snow shoes because there were a few rough patches which snow shoes would only make thing worse. There were even baby cornices forming. My camera sadly lost power, I figured it was because of cold, the next hike I found out it was out of power. 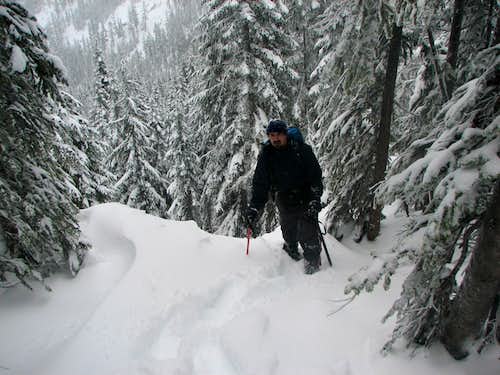 Determined to make the Summit 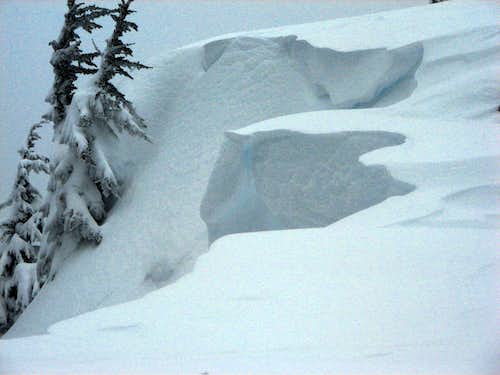 Baby Cornices near the Summit
Soon we reached the top which I had some quick food and water, took some photos and then it was time to head down. The winds made things a bit colder, I borrowed Eastking's camera to take a few more photos. My hands became seriously cold by then. When the heat pains were gone I felt much nicer.

Summit Panorama
We then dashed on back because it was becoming late, when we got to the lake I was surprised to see a melted water hole which was a clear sign of stay off this lake. The rest of the way we jogged on down. On the way home there were lots of people with there high beams on which made driving difficult, so if your one of those folks, drivers really appreciate it when you turn them off for on coming cars.

All in all it was a great trip, can't wait til next trip!
Here is Eastking's Trip Report: All Tyed Up with Bad Weather
BTW I was the guy who gave him the trip title idea so don't call me a copy cat.