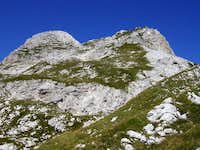 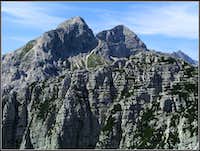 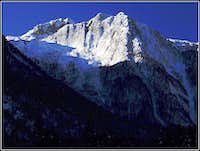 The name of the mountain is pronounced something like 'Chernelska shpitsa'. Because there are more peaks you could also hear the name Črnelski vršiči.

The core part of Kanin / Monte Canin massif is a high limestone crest, going in a west-east direction and steeply falling towards the north and south on high karst plateaus. A typical, so many times seen and photographed view! The whole Kanin group is of course broader and continues on one side from the highest point (Kanin / M. Canin) towards the south and towards the north-west, and on the other side it branches towards Rombon (SE direction) and Jerebica (E-NE direction). And here our mountain stands - the last high, easternmost peak in the core part of Kanin massif. This part of the high Kanin ridge finishes actually with more peaks, but on this page I shall describe only Velika (Big) Černelska špica / Cima Confine, 2332 m, and its immediate NE neighbour Mala (Small) Černelska špica, 2273 m. The small one has another Slovenian name: Špiček ('Shpychec').

West of Velika Črnelska špica rises in the main crest a distinct and higher Hudi vrsič / Monte Cergnala, 2344 m. Its Italian name can lead to some misunderstanding as the root of the word is clearly the same as with our mountain. But as it is only a transcription of the Slovenian word, the original, local names should be respected.

Velika Črnelska špica looks like a fine pyramid from both sides, while Mala Črnelska špica is more a side rocky bump, with which the high Kanin crest finishes. Towards the north, both peaks are steep and rocky, so no normal ascent goes there (If you have any information about the possible direct ascent over there, please post it!). The southern slopes are less steep and grassy, there the non-climbing ascents go.

Mountains in the eastern part of the high Kanin crest are remote and lonesome. On both sides (northern and southern) marked paths go below the whole crest, but approaches from valleys to the summits are quite long. This is especially true for the southern side, while from the north, from Sella Nevea / Nevejski preval, 1190 m, the altitude difference is not so big, but there are no easy ascents on these summits from that side. From the south, the marked path reaches the top of Velika Črnelska špica and also the peak of Mala Črnelska špica is easilly reached. In World War I over the nearby Rombon a frontline went. If interested, you can read some more information on the page of Rombon.

A Heaven For Speleologists

Erosion and tectonic moves created in Kanin massif many very deep and long caves. The depth potential of the massif is over 1800 m, which creates some possibilities to get even deeper as explorers came today. Each year, mostly in dry seasons, in these caves expeditions of the best speleologists of the world arrive. The deepest cave on the Kanin-Rombon plateau is Čehi 2. Its depth is 1502 m, the entrance was discovered in 1991 by Czech, Italians came till 1993 1370 m deep and almost 4000 m into the massif. In 1999 Ucrainian speleologists in a 14-days expedition discovered a new perplexus of tunnels, which lead them down on 1380 m of depth. Finally on December 29th, 2003 Slovenian speleologists reached the lowest point on the depth of 1502 m. Here's the list of some famous caves in Kanin-Rombon massif (source):

It is unnecessary to stress that views from the top of Velika Črnelska špica are wonderful. Eastern Julian Alps are as clearly distinguished as from the nearby Rombon or Jerebica, The same is true for the Vis and Montaz group and Krn group, while towards the west all the higher peaks of Kanin group are aligned on the high crest. 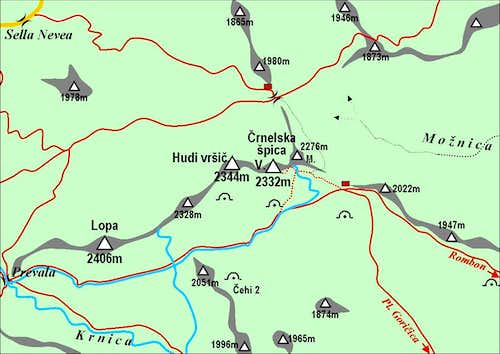 Velika Crnelska spica and its routes

1. From Kanin cable car station. By the upper station we have the altitude of 2200 m. But the way to the top is still long. First we ascend to Škrbina pod Prestreljenikom, 2292 m, then descend to Prevala / Sella Prevala, 2067 m. 45 minutes till here. From Prevala we continue by the marked path on the southern side of the main crest. This part is very interesting, we can admire one of the biggest 'karst deserts' in Eastern Alps with all its phaenomena. So we pass the summit of Lopa and reach in some ups and downs the southern slope of Velika Črnelska špica. Here we carefully look for the marked path, which deters left up around the mountain, towards the notch between Velika and Mala Črnelska špica. This path is only weakly marked, while marks on the horizontal path are quite good. We ascend to the notch between the two peaks, where still ruins from the World War I stand. From there we continue towards the left and carefully seek passages over a steep grassy slope. The path has almost completely disappeared, but if we choose good, we don't need to climb at all. From the notch also Mala Črnelska špica can be reached by the rests of old military paths. 3 hours altogether. If we don't want to go directly, we can continue by the marked horizontal path to the notch between Mala Črnelska špica and Vrh Ribežnov, 2024 m (already in Rombon ridge). There a speleologic bivouac is arranged. From this notch we can cross the slopes of Mala Črnelska špica towards the notch between it and Velika Črnelska špica and from there continue to the top.

2. From Bovec over Goričica meadow. We ascend by a good marked path from the center of Bovec, 483 m, towards the north on Goričica meadow, 1333 m. 2 hours 30 minutes till here. By the hut our path deters left, while the normal approach on Rombon goes right. From now on we will be 2 hours more ascending by a karst valley, which will bring us in many steps on the saddle between Mala Črnelska špica and Vrh Ribežnov, where the bivouac is arranged. From there as described in #1 to the top. A long and in summer hot ascent, lasting some 6-7 hours. No water along the route!

4. Over Vrh Laških brežičev / Sella Robon. This pass, 1865 m, goes over the ridge, which falls down from Mala Črnelska špica towards the north. The western slopes of this ridge are falling on the northern high Kanin plateau, while the eastern slopes are falling down into the end of Možnica valley (there called Korita). The pass can be reached either from Sella Nevea / Nevejsko sedlo (path No. 637 brings you up in some 2 hours) or from Možnica valley, where you can find no path (a demanding scramble - some 3 hours 30 minutes!). From the pass we ascend left upwards, keep on weak trails low and over an exposed passage scramble around Mala Črnelska špica, until we reach on its southern side the route, described in #1. From the saddle 2 hours, altogether 4 hours from Sella Nevea. Demanding scramble, in the upper part no path or marks!

1. The Main Crest From Prevala / Sella Prevala. For climbers, who master UIAA III degree comfortably, a nice experience might be the whole part of the Kanin high crest from Prevala to Mala Črnelska špica. You would in some 5 hours climb ascend the following summits: Vršiči pod Lopo, 2285 m, Lopa, 2402 m, Konjske police, 2318 m, Grdi vršič, 2328 m, Hudi vršič, 2344 m, Velika Črnelska špica, 2332 m, Mala Črnelska špica, 2273 m. To these 5 hours you should add some 5 more hours for the ascent and descent on Sella Nevea. 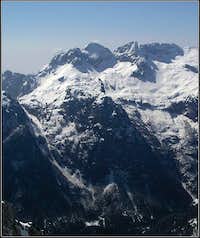 1. To Krnica Valley. A ski tour from Sella Nevea would not add much value in the part from Prevala saddle towards the east. Such trip is possible of course, and is the same as the above summer route #3. But coming on Kanin ski resort from Bovec, we can do with skis the tour, described above as #1. From the saddle between Velika and Mala Črnelska špica to the summit of Velika the slope is very steep and exposed for skiing, so the tour is no more treated as a normal ski tour. Then we return half way back towards Prevala and from below the western ridge of Lopa (or from the ridge itself) ski down towards the south into Krnica valley. There, we can reach the middle station of Kanin cable car and go up on the ski resort again, or complete the tour by going down to Bovec.

2. To Možnica Valley. This is an exposed and very hard alpinistic ski tour, where also good orientation skills are needed. The ascent from the end parking place goes to the end of Možnica valley (Korita), from there steeply up towards Mala Črnelska špica, exposedly around it on the southern slopes, and as described above on the summit of Velika Črnelska špica. Perhaps only for those most experienced enthusiasts, who did already 'all the other tours' in this region. 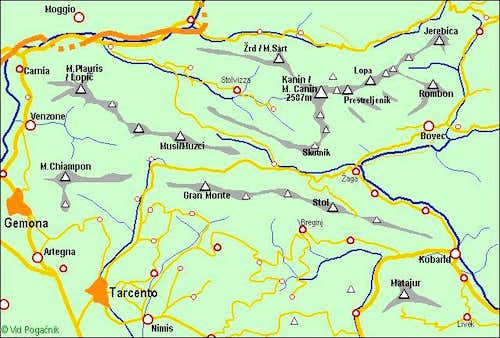 The majority of visitors of Visoka Črnelska špica comes from the upper station of Kanin cable car. So this tour starts in Bovec.

The second trailhead could be the end of the mountain road in Možnica valley, 785 m, and the

Two cable-cars can help you reach the high plateau of Kanin mountains: 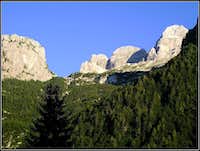 Velika Črnelska špica can be best ascended in summer and autumn. The ascents, described above in #1 and #3 can also be done in winter and spring, when these mountains are usually heavilly covered with snow. Prevala pass is anyway a popular ski tour destination. Crossing the plateau south of the main crest with skis would be medium hard, the same is true for skiing from the notch between Velika and Mala Črnelska špica. For the final part of the ascent on Velika Črnelska špica crampons and ice pick would be a prerequisite in winter conditions. Very good skiers could even ski down from its very summit (alpinistic ski descent).