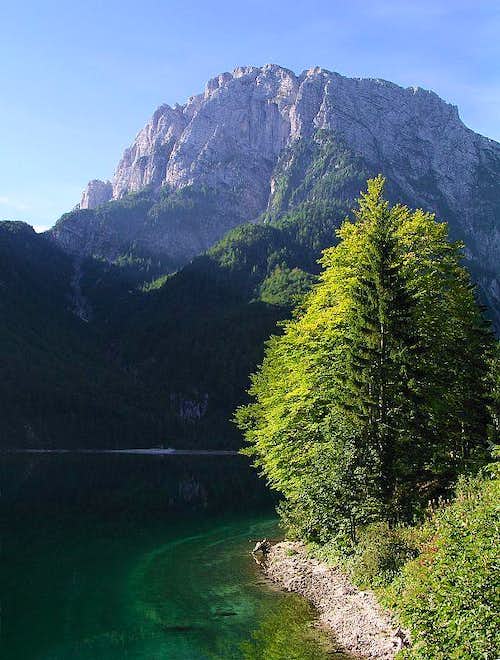 Jerebica / Cima del Lago from the Italian side

From the Italian side in last times the mountain is called also Cima del Lago - obviously very artificial. 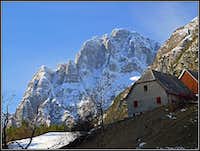 Although Kanin mountains are not the most appropriate for hard climbs, Jerebica is totally different. No scent of endless horizontal layers and ledges, but solid rock with vertical structures, dropping some 450 m and thus enabling attractive routes.

Not only climbers discovered Jerebica late, also ordinary mountaineers were neglecting this beautiful mountain. Some decades ago this was understandable, because the mountain lies on the Slovenian-Italian border. After regime became more liberal, the obstacle was remoteness and only one, although marked, quite long ordinary hiking route on each side of the border. 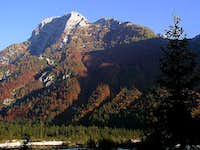 Jerebica stands in the main crest arriving from Kanin / Monte Canin (the dividing pass is Čez Brežič, 1699 m) towards the north-east, where on Predel Pass it reaches the Mangart-Jalovec group. Before reaching Jerebica and after leaving it, this crest has many lonesome peaks, which are only rarely reached by mountaineers. On the north-west, the slopes of this crest fall deeply in Jezerska dolina / Val Rio del Lago. On south and east, the slopes of Jerebica crest are falling first in Možnica valley (side valley of Koritnica) later in Koritnica valley itself. The crest ends on Predel Pass, 1156 m, where the road crosses the mountain range and border. In Jerebica subgroup the following peaks can be listed (from SW to NE): Bohinca, 1938 m, Mali Rukavec, 1728 m, Mesnovka, 1841 m, Veliki Snežni vrh, 1958 m, Gorenji Vogel, 1847 m, Krivi rob, 2005 m, Jerebica, 2125 m, Mala Jerebica, 1786 m, Planja, 1693 m, V podne, 1456 m, Nemške glave, 1596 m, Ruševa glava, 1512 m.

The panorama from Jerebica summit is great. The Mangart and Jalovec pair is from nowhere seen in such harmony, and rising above Log pod Mangartom more than 1900 meters! Towards the north-west the whole massif of Viš can be seen. Further to the south-west Kanin group, especially the high slopes of Rombon above Možnica valley are impressive. Towards the south-east in distance Krn group and on north-east the long, mighty wall of Loška stena. 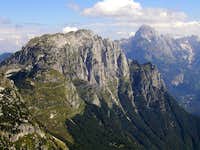 Bor - Jerebica from the SW

1. The southwestern ascent from Možnica valley can be treated as one of the two normal ascents. From the road end, up on Jezersko sedlo (saddle), 1720 m, and on the northern side of foresummits to the top. From Možnica valley 5 hours. Although marked, the route needs an experienced mountaineer.

2. From Jezerska dolina / Val Rio del Lago. In maps and in literature two approaches from north are mentioned. The first one starts in the main valley just opposite of Beli potok / Rio Bianco valley, then it ascends over the slopes of Mirnik, finally reaching Jezersko sedlo, 1720 m. This route is also marked and easier than the route from Možnica. The second route starts at Rabeljsko jezero (lake) and goes through Gamsov graben (Gola dei Camosci, Gamswurzgraben) - ravine, when reaching its end we need to scramble and climb a bit to reach the north ridge of Krivi rob and later the marked path. Would appreciate any further information about this route!

Koritnica valley is also known as the valley of 100 waterfalls. Some of them are hardly accessible, others easily. Here are links to some waterfalls in the Jerebica area (also some English descriptions):