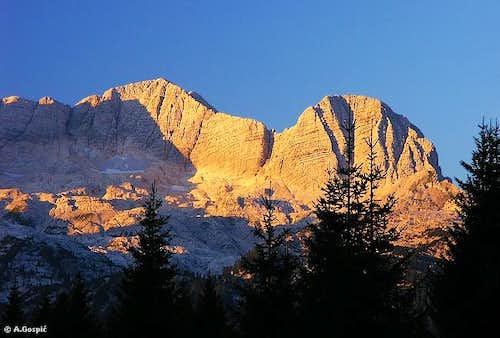 Kanin / Canin group is an Eldorado for cave explorers (speleologists). Its karstic high plateaus are like a Swiss cheese, many extremely hard accessible caves exceed the depth of 1000 meters. But here we shall focus on the mountain, not on the whole massif of Kanin but on its highest summit - Visoki Kanin (High Kanin) / Monte Canin.

Many hiking routes and ferrattas reach its summit. As a rock climbing mountain, Kanin is not so popular. Although high, its summit walls and ridges only moderately exceed the surrounding high plateaus. And walls have a special structure. Formed of many ledges and steps they are not appropriate for harder climbs. In winter and spring high plateaus are also very appropriate for tour skiing (although the usual ski tour can not be done from the summit).

ganesh70 - Visoki Kanin from the west

Three long ridges join on the Visoki Kanin summit. The main ridge of the group arrives from the main Julian Alps crest from the east. On the highest part of this ridge no pass is lower than 2000 meters. From the northwest a long and lonely ridge of Žrd (Monte Sart), 2324 m arrives, separating the valleys Rezija / Resia and Reklanica / Raccolana. And towards the south, the highest part of Kanin massif ends with a strong ridge, going over many high peaks to the Učja / Uccea pass, 620 m, from where towards the south lower mountain ranges continue. North of Visoki Kanin is a high plateau, where a small glacier lies, the plateau is falling into Reklanica / Raccolana valley culminating on the Nevejski preval / Sella Nevea (Pass), 1142 m. Towards the west of summit, high slopes are falling down into the remote Rezija / Resia valley. Towards the southeast, the summit ridge soon lowers to a broad high karstic plateau, which is finally falling down to Soča / Isonzo valley. Here from the river Soča to the summit of Visoki Kanin there are more than 2200 meters of altitude difference!

The karst nature of these mountains is on thesouthern side best illustrated by water. Above 800 meters there is no water on the surface at all! Beware of this phaenomenon when hiking! But when you are travelling along Soča valley, you will see near the village Žaga a huge Boka waterfall. Enormous amounts of water suddenly burst out from southern slopes of Kanin, as if all water reservoirs would be emptying there. Boka is most beautiful in spring, when high above on the mountain up to 6 meters high snows are melting. Other sources are also near Bovec.

The first recorded ascent on Visoki Kanin / Monte Canin was done in 1842 by Otto Sendtner.

About the Geology of Kanin 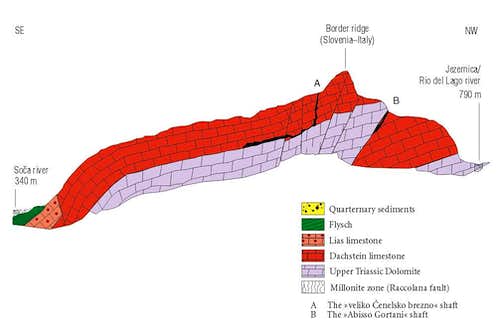 Stratigraphic cross-section of the Kanin massif

These two rock structures have a bit different features. Limestone is very sensitive on chemical erosion. Water is easily dissolving it, creating thus many karst phaenomena. Dolomite is more resistant to chemical impact, but is mechanically more fragile. In Kanin massif all water immediately goes underground through thousands chiasms, holes and caves, and only in big depths, often more than 1000 meters underground, when it reaches layers of dolomite rocks, water starts flowing southwards and finally comes on the surface just above the valley near Bovec. So, strong karst sources can be admired, especially on the southern side - Boka, Gljun and Možnica. On the northern side there are less water sources, one such example is on the Goriuda meadow, where the creek below the meadow forms a wonderful waterfall. The layers of Dachstein limestone are on the southern side of Kanin massif also thicker than on the northern side, and also the Dolomite base is slanted, its inclination is falling from the north towards the south. That is why Kanin caves are deeper in the southern part and that is why water sources are on the southern side coming out on lower altitudes, bringing out also waters from the northern, Italian side of the massif.

We should consider the karstic nature of Kanin massif when planning tours in it – in higher regions we shall almost nowhere find water on the surface.

Visoki Kanin is the last high mountain in the south-western part of Julian Alps. It offers an excellent panorama - from Adriatic sea on the south, Carnic Alps and Dolomites on the west, the whole Julian Alps on the north to hilly interior of Slovenia.

For a start, here are a few pictures of karst phaenomena on the northern plateau.

4. From the west (from Rezija/Resia valley, Korita/Coritis village, 641 m). Marked path and scramble to the south ridge and over it to the summit. 7 h.

5. From the north-west - Visoka rosijanska pot (Alta Via Resiana). You can start either in Rezija/Resia valley, 641 m, or on Sella Nevea, 1142 m, and reach by marked paths the Marussich bivouac, just above the Sella Grubia/Peravo (pass), 2041 m. If you want to climb the NW ridge of Monte Canin, you have to climb before the via ferrata "Rosalba Grasselli" on the west crest of Picco di Carnizza / Vrh Krnice, 2443 m, which is short but quite demanding in a couple of aerial passages. From there you continue further on by Visoki Kanin's NW ridge to the summit. The route is not secured all the time and requires climbing of I.-II. UIAA degree.

6. By the south ridge - Visoka rosijanska pot (Alta Via Resiana). This part of the famous high route is very beautiful - marked, exposed, but not secured. It requires climbing of I.-II. UIAA degree, only on one place, where it reaches III. degree, it is secured by steel ropes. The starting point on the high route is Med Baban saddle, 2004 m on the south ridge, which can be reached either from Rezija/Resia or Soča/Isonzo valley. 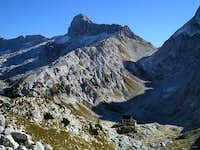 To climb Visoki Kanin the following mountain huts and bivouacs are useful:

I think it should be mentioned that if you want to climb the NW ridge of Monte Canin, you have to climb before the via ferrata "Rosalba Grasselli" on the west crest of Picco di Carnizza, which is short but quite demanding in a couple of aerial passages. Sella Peravo is much more known as Sella Grubia. Great route anyway.

Thanks, Fabrizio! I copied you comment on the page of Kanin. I also gave you editing rights, so please just do any corrections on the page you find appropriate. And secondly, we have two trip reports on Via Alta Resiana, but you'd expect people will first read route descriptions. If you did this route, please post a route description. You are having quite a long list of them to write, he, he.

You're right... About the route actually I did only the first part of it ( or the second, it depends from where you start ), from Stolvizza to the Marussich bivouac and the next day from the bivouac to the summit of Monte canin and back. This is one of the classic treks of the Julians, I think it deserves a good page here, I could write this part and maybe Norbert can write the other if he has the time. Ciao!