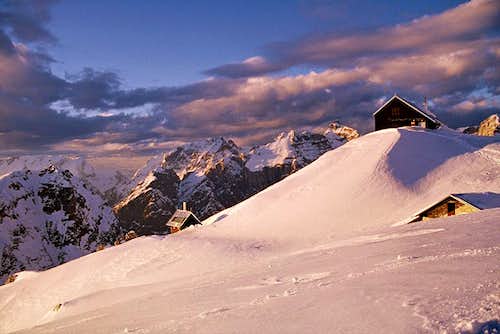 The hut stands on a small bump, just above the Prehodavci Pass, connecting Trenta valley with The Valley of Triglav Lakes. It was opened in 1954, on a place where ex Italian military object once stood and renewed in 1973. The hut is opened from start of July till end of September. In the dining room there's 40 seats, in 2 rooms there's 39 beds. The winter room stands separately, in a wooden object and has 16 beds. It is allways opened.

Zasavska koca is serving ascents on mountains in Triglav Group and Bohinj Group.

The hut is managed by Mountaineering Club Radece.

From the village Na Logu, 620m we drive by a narrow road into Zadnjica valley. The second half of the valley is best done by foot. Reaching the end below the mighty NW wall of Kanjavec, we turn sharp right (SW) and proceed by Zadnjiski Dol, a valley, filled with gravel, to the saddle Cez Dol, 1632m. This saddle can be reached also by the other side of Ozebnik (mountain), through Korita valley and Trebiski Dol. On the saddle we turn left (SE) and start ascending in many turns to the hut. All paths are marked and not dangerous (steep in some places). From Na Logu 4h.

This is a nice trek over Bohinj alpine pastures. From Stara Fuzina, 546m, we hike up on Vogar meadow. This pasture can be reached also by a forest road through Suha valley. From Vogar, 1054m, three paths lead towards west. The northernmost two go to Planina Jezero. This meadow can be also reached from the road through Suha valley. From Planina Jezero, 1453m, we proceed towards NW to Dedno polje pasture, 1560m, and then in the same direction into the valley Za Kopico. This beautiful high alpine valley is parallel to the famous Valley of Triglav Lakes, but unlike it, it is dry. The valley and path, going by its bottom slowly turns right, so we reach the saddle Vrata (below Zelnarica), 2192m going towards north. Now we must cross the scree slopes below Vrsaki first towards Hribarice plateau and then down to Zeleno jezero (lake) and some 100m up again to the hut. From Stara Fuzina 7h.