ClaudioNC - Kanjavec at the end of the Valley of Triglav Lakes

On this page one of the most powerful mountains of Julian Alps is described. It is true that in comparison with other giants of Julian Alps, Kanjavec is easily ascended. At least from the south. But that does not diminish its mountaineering grandeur. On the contrary, the southern slopes allow that Kanjavec is the highest mountain for tour skiing in Julian Alps, extreme skiing excluded. In fact, Kanjavec should be considered as the highest mountain of Bohinj. But usually it is attributed to the group of Triglav, where we'll put it as well. The summit is rising just a few miles south-west of Triglav. Historically, it's not only Bohinj people who were mostly dealing with it. We shall soon describe how the people of Trenta were even more involved in exploring it. 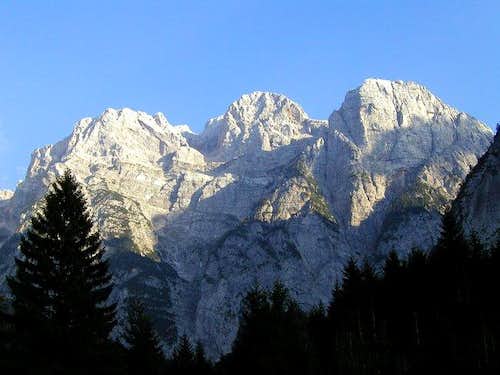 The huge northern wall is the most impressive feature of Kanjavec. To be exact, it's even higher than the famous North wall of Triglav. That's due to the fact that Zadnjica valley is lying much lower than the valley of Vrata. But the northern wall of Kanjavec is of course not as monolithic as Triglav's north wall. The view from Zadnjica reveals several steep sections, but also a big horizontal band, cutting the wall, and several less steep ravines, surrounding side peaks. The exception is the compact north wall of Vršac, 2194 m, which is very popular also with the most capable rock climbers.

But the whole scenery above Zadnjica valley end is really great! You should come and see it once! On those high northern walls above Zadnica valley, there's also a lot of history of Kanjavec. Geographically, they are connecting to the western slopes of Triglav, which were always in the focus of mountaineering attempts, at least in the times of classical mountaineering. This is the world of the famous Trenta shepherds and hunters, who were with almost no exception in those times all unsurpassable climbers. They found several passages over those gigantic walls. It's documented that the shepherds from Trenta were keeping in the middle of the walls of Kanjavec even their herds of sheep! Those steep meadows were reachable only with the help of long logs, on which they left shortly cut branches (they called them "komarča"). They carried those logs from the valley, used them to climb over steep rock sections, carying sheep on their shoulders. Over summertime they simply left animals there, they couldn't go anywhere anyway. Only time to time they brought them salt and counted them. Trenta hunters were ascending regularly over Komar on Dolič pass, over Skok and Zelenice they guided Julius Kugy on Triglav, Jože Komac guided Henrik Tuma without any special difficulties from the north on Kanjavec. But in the classical era of climbing in Julian Alps, for the highest part of Kanjavec walls there was not much interest. But the route, connecting by the big band Dolič with Prehodavci, was secured.

Even more than in the northern walls, Trenta people were interested in the western side of Kanjavec. They were reaching it from Čez dol pass, 1632 m, which connects Zadnjiški dol (the dry Zadnjica valley-end below Vršac) with the Trebiščina alpine pasture, lying west of the pass. Trenta people were poor and their pastures were not broad enough to guarantee their survival. But on the other side of Lope ridge, above the Valley of Triglav Lakes and Zgornja Komna, there were broad, unused meadows. Bohinj people were mostly not interested for the highest parts of their mountains. So, the people of Trenta were migrating with their herds over the Lope ridge and were more or less ilegally using the meadows on the southern side. Henrik Tuma reports that they had three passages. The first one was just near Vršac, the middle one was there, where nowadays the marked path goes and the third, western one was below Zadnja Lopa. Over these passages they were reaching the end of the Valley of Triglav Lakes, the basin, surrounded with Vršac, 2194 m, Kanjavec and its southern foresummit Poprovec, 2405 m. The basin is most of a year filled with snow, later the highest of Triglav lakes appears - Jezero pod Vršacem. Nowadays, the south-western slopes of Kanjavec are interesting for base climbs and demanding alpinistic ski tours. No normal route goes from Prehodavci up there, but when the slopes are covered with good snow, they become attractive. In the short walls of Poprovec there are a few less interesting, not so hard rock climbs. 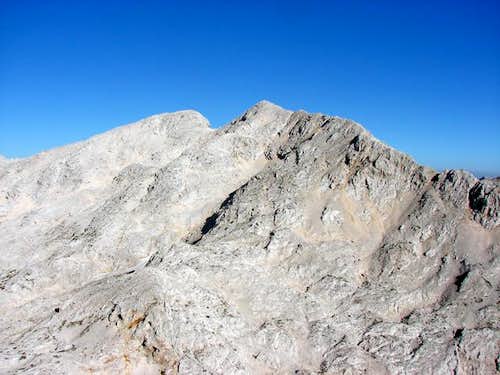 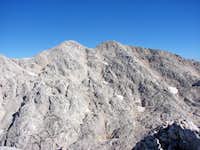 The southern slopes of Kanjavec are endless, but only moderately steep. Of course, if we follow them all the way down into the Bohinj valley, where in spring the long ski tours are ending. But I will stop describing that side of Kanjavec already on the Hribarice high plateau, ca. 2350 m. South of the plateau the system of karst valleys and ridges above them already belongs to many distinct Bohinj mountains and you can find descriptions on the pages of Vršaki, Debeli vrh, Skednjovec and others. Here, on the page of Kanjavec, ski tours will be described only. Just to mention already here: over the Hribarice plateau, so just 30 minutes below the summit of Kanjavec, one of the most frequented routes in Julian Alps goes, connecting the Valley of Triglav Lakes with the summit of Triglav. So, from the 2-headed summit of Kanjavec relatively gentle, barren slopes are descending on the Hribarice plateau. These slopes lie between the SW foresummit of Kanjavec (Poprovec) and the SE ridge, finishing with the Zob Kanjavca. In the times of tour skiing these slopes are ideal, from Hribarice then you can choose to ski down into any of the surrounding valleys. Towards the south-west, the Valley of Triglav Lakes lies. It is a geological specialty of Julian Alps. Layers of non-limestone rocks enable several beautiful lakes while all around a carst landscape stretches. This difference is best seen in the several other valleys south of Kanjavec. It is hard to imagine, that someone would enjoy travelling there in summer. The limestone "desert" is hardly passable, there are also many caves. Again, this world is completely different in winter and spring, when snow covers the rocky landscape. Through these valleys, with much orientation skills (fog there is extremely dangerous!) you can endlessly ski down towards Bohinj lake, to the altitude of only 525 m. 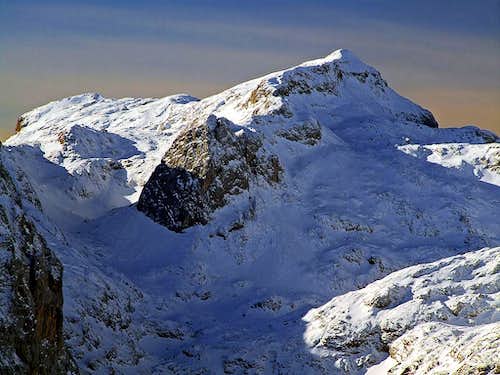 The eastern and northeastern side

As said, towards the SE the summit ridge of Kanjavec lowers down on the Hribarice pass (beyond it, the ridge continues with the rocky summit of Mišelski konec, 2464 m). This ridge of Kanjavec falls down into the valley-end of Velska dolina with a steep, monolithic wall, hosting many interesting and quite hard rock climbs. The ridge point is called Zob (The Tooth) Kanjavca, 2416 m.

Finally we have also the north-eastern side of the mountain. Also this one is not especially steep. Rocky and rubble slopes are rising from the Dolič pass till the very summit ridge of Kanjavec. Just the last passage to gain the summit ridge is steep and rocky enough, so the marked path going up there is in a few meters protected by a steel cable. In winter conditions, we get high there by a steep, snowy ravine. More remotely, east of Kanjavec Velska dolina (valley) lies. There are beautiful mountain meadows, which once used to be also pastures, and you can still see some old shepards huts standing on Velo polje and Mišeljska planina. 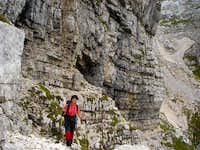 As said, Kanjavec is frequently ascended in summer and autumn times. Rising so close to some main routes on Triglav, hikers often take it "by the way".

It is very different in spring and even in winter. Skiing down to Bohinj valley (south), or to Velo polje and further to Krma and Sava valley, offers to a fit skier some 2000 meters of altitude difference. For rock climbing the interesting sections are all around the Kanjavec massif.

Close to Kanjavec there is only one higher mountain. Triglav is obscuring a part of the north-east horizon. But the view on Triglav itself is from Kanjavec magnificent. Like a big throne, still warm of the ruler's presence, Triglav rises there, oriented towards the Slovenian land! On all other sides, the view from Kanjavec is mostly open. From the high Martuljek mountains (Škrlatica and others), over Razor and Prisojnik, the view flies far towards the west. There are the giants like Mangart and Jalovec, further on the Western Julian Alps, on the horizon Hohe Tauern and Dolomites are clearly seen. Very interesting are also the views towards the south, on Bohinj mountains, which can be overviewed better than from the higher, but already a bit remote summit of Triglav. In a clear weather, Adriatic sea is shining on the horizon. Very diverse is also the view towards the east, on the mountains above Velska dolina and in the distance towards the central Slovenia. 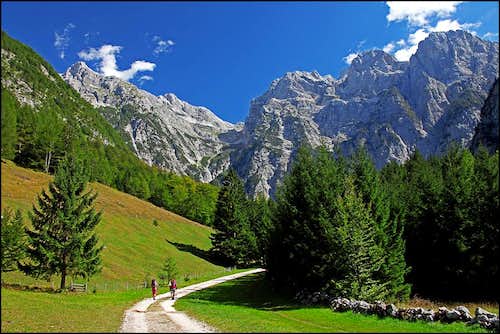 Kanjavec can be ascended from many differet sides. But all ascents are long and also high, as the roads end deep down in remote valleys. 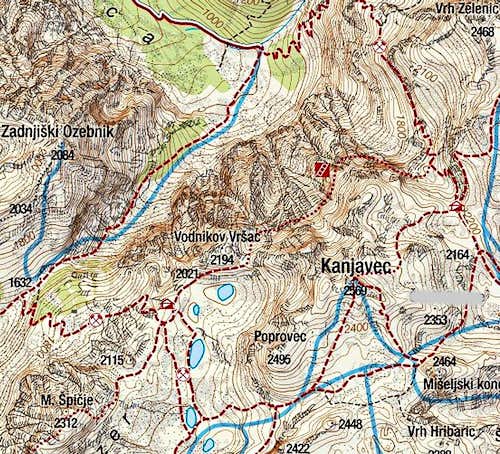 The big NW wall of Kanjavec is hosting some 8 climbing routes (source: Primorske stene). Old routes are of UIAA III-IV difficulty, the routes from 60-ies to 80-ies of the previous century are reaching also the upper degree V. Two routes go only from the big ledge on top. In winter a considerable waterfall gets frozen in the central part of the wall. It's also suitable for climbing. Above the Triglav Lakes vally end there's the SW face. In the W foresummit of Kanjavec and in Poprovec there's half a dozen of routes (source: Primorske stene), mostly not difficult rock climbs. The winter route is recently quite often done also as an alpinistic ski tour. It is named Aerotik (50 deg./45 deg., 450 m, TD). 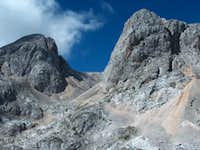 Zob Kanjavca is a monolithic wall, oriented towards the SE. It also hosts good half of dozen of routes (source: Primorske stene), but they are much more difficult (up to VIII-). The routes are only up to 200 m high, a little disadvantage of this climbing area is remoteness - unless of course if you are staying in the Dolič hut, which is close enough. Remark: As mentioned, the summit of Vršac, 2194 m is actually only one of the side summits in the Kanjavec massif. But due to its climbing importance, it righteously has here on SP its own page. So, I'm not describing climbs in Všac on this page. 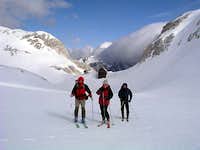 Because of Triglav neighbourhood, also Kanjavec is supported by several mountain huts. In summer they are overcrowded, but outside main season they offer excellent winter rooms.

In Trenta valley, in Bohinj and in Sava valley there are many camps, but due to remoteness they are not really useful to climb Kanjavec.

Kanjavec is a summit for all seasons. Even if it's an ideal tour ski summit, we should choose the time for this tour carefully. In hard winter don't go up there! Ascents are long and just all of them are exposed to avalanches. Winter on high, remote mountains can be something completely different than winter on a summit close to civilisation. In poor visibility or in a high mountain storm also Kanjavec can become a difficult and dangerous mountain. Especially, if we attempt it through the labirynths around Debeli vrh. In hard winter have in mind that also the road on Blato will not be cleaned. For tour skiing the most appropriate months are usually from March till start of May.

Kanjavec is in the core area of Triglav National Park, so all activities which could possibly harm nature are strictly prohibited.