Autumn in the Valley Of Triglav Lakes

High on the plateau 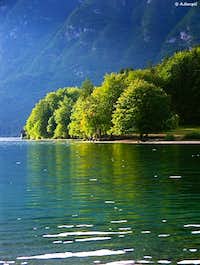 Bohinj world has a special flare of a once remote, archaic country. In remote history even paths along Sava Bohinjka river were not used so much, but instead rather paths over high saddles of the Bohinj Southern Chain towards the south were used for trade. In recent days everyone was wondering why those locals didn't develop all kinds of touristic facilities more. Now we realise, how good it was. Every tourist in the World knows Bled lake, which is now crowded with hotels. But nobody of us, who live here, woud go and spend a sunny summer sunday there - we rather drive further to Bohinj lake where you can still touch the nature.

Bohinj subgroup is first of all a paradise for hikers. Hikes over the long panoramic ridges, big karstic plateaus, from one alpine meadow to enother, through beautiful valleys, among which far the most prominent one is The Valley of Triglav Lakes, all this and much more can occupy you for many days. Some peaks are also sharp and hard to access, so also those of you, who like some depth below your legs, will be satisfied. And in winter and early spring Bohinj world becomes a paradise for tour skiing. From the summit of Kanjavec to Bohinj lake you have more than 2000 meters of skiing. For harder climbing high walls are rare, but in Bohinj valley you will find some nice resorts with short walls and crags. On high karstic plateau (especially behind Pršivec) some of the deepest caves were found. But in the recent years the speleological focus has been moved on Kanin / Monte Canin massif where even deeper caves were found.

From its start below Komarča walls till the eastern end of the lake, Bohinj valley is unique. From there further towards the east it is separated into the Upper Bohinj Valley (north) and Lower Bohinj Valley (south). The two valleys are separated by Rudnica hill, 946 m. The upper valley soon ends on the slopes of the big, forrested Pokljuka plateau, while the lower valley, where Sava Bohinjka flows, continues through a deep canyon towards the E and NE, finally finishing on the planes near Bled.

South of Bohinj valley a long mountain chain stretches, named The South Bohinj Chain. On the east it is attached on Sorica to forehills, on the west it finishes on Bogatinsko sedlo (pass), 1803 m. Peaks in this mountain chain are of very equal altitudes and saddles among them are not deeply cut.

Just north of Bohinj lake Pršivec massif, 1761 m, steeply rises. This broad mountain is not so high, but as it rises 1236 m directly out of the lake, it makes a mighty impression and is also worth visiting. North of Pršivec another special world begins. This is the world of the high Bohinj alpine pastures. Remote, hidden in broad forrests, some of them abandoned, they are dreaming of their past importance. This is where still the best cheese is being produced by old recipies, this is, where so many Bohinj fairy tales have their sources. Dividing Julian Alps into groups, we attributed Pokljuka plateau and also its southern slopes to the Triglav subgroup. Actually those mountains belong by their nature to Bohinj. But let us keep the line between the two subgroups in Voje valley and not talk about alpine meadows east of it. In their unsurpassed beauty, pastures north of Pršivec are also goals of independent tours. Reaching Krstenica, 1670 m, Laz, 1560 m, Dedno polje, 1560 m or Viševnik, 1615 m, to name only few of them, can be a nice goal of a mountain tour. North of the plateau of Bohinj pastures mountains get higher and higher. You might also say that the crescendo of this trend is Triglav itself. The highest mountain of Bohinj world should be Triglav, 2864 m, or at least Kanjavec, 2569 m. But again, we put the border of Bohinj subgroup on Hribarice plateau and Mišeljska dolina (valley). So actually the highest mountain of Bohinj subgroup is the unimportant Vršaki, 2448 m, just south of Hribarice plateau. By its position the most dominant mountain in this subgroup is Debeli vrh, 2390 m. The geography of this subgroup is somewhat complicated, resembling a big swirl. On the very western side a long crest of mountains stretches above the Valley of Triglav Lakes. Some peaks there are: Velika and Mala Tičarica, Kopica and Zelnarica. East of this crest there's a shallow valley Za Kopico and east of it another, less important crest of Vogli. Then the real mess begins. We are in the centre of our swirl. On the NW the 4-headed Vršaki stand. SE of their small group there's a broad karstic plateau, undulated considerably, but the only real summit is Debeli vrh, standing more towards the SE. Beyond Lazovški preval (saddle) in it's crest the last peak is Ogradi. Finally on the NE another long crest starts on Hribarice plateau. The first peak is the unimportant Vrh Hribaric, then the sharp Škednjovec comes and finally the three peaks of Stogi.

Finally let's have a look on the world west of Bohinj lake. Above steep, almost 1000 m high slopes a broad plateau, named Komna begins. This is an undulated karst world of thousands hills and shallow valleys among them. Passable perhaps only in winter and early spring, when everything is under snow. More about this world see on the page of Lanževica, the first summit in a long chain which starts north of Bogatinsko sedlo. This chain has many fine summits, very valuable mountaineering and skiing goals: Kal, Čelo, Travnik, Plaski Vogel and Veliko Špičje. It finishes on the saddle of Prehodavci, attaching to the central Triglav subgroup. Even further towards the west there are some important summits and crests, by their nature not any more belonging to Bohinj world, but to Trenta valley world. As we have no subgroup for Trenta mountains let's name them here. On Travnik, to the main chain a side ridge of sharp mountains (Travniški rob, Plazki Kuk) is attached. North of Veliko špičje, there's a small plateau and a crest of nice mountains around it (Velika Tičarica, 1891 m). And finally, a completely Trenta mountain - the great panoramic Zadnjiški Ozebnik, 2084 m.

There are too many mountaineering goals to mention them all. Here are just some ideas.

Here is a proposal of a short biking tour in Bohinj. 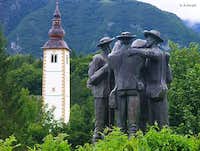 People of Bohinj valley were long time living in a remote corner of our mountains, being even more connected via high mountain passes with the southern areas of Julian Alps than via Sava river valley with Bled and its surroundings. They were known by their rudimentary, forceful nature, beautifully illustrated by this anecdote: Joža Čop the most famous Slovenian climber in times between the World War I and World War II, who was also a mountain guide, once met in Bohinj a local lumberjack. Just for fun (Čop was known as a big joker) he asked him how much would be the charge for going up to the Valley of Triglav Lakes. "Me? Nothing", said the guy. "You may proceed".

And here's another legend: Farmers in Bohinj rebelled against their landlord. That one supressed resistance, charged men to death and expelled their women. However, he allowed women to take with them as much as they could carry on shoulder. And so women - chose their men and carried them over the South Bohinj Range, into Čadrg village. From Bohinj were also 'Štirje srčni možje' - 'The Four Brave Men', who already in 1778 (before Mont Blanc was climbed!) first climbed Triglav: Luka Korošec, Matija Kos, Štefan Rožič and Lovrenc Willomitzer.

For the broader orientation (highways, railways, airports, ...) see the Eastern Alps GROUP page, and, because this is only a subgroup page, the Julian Alps page. On the map above you can see that all roads end in Bohinj valley. The most popular mountaineering trails start at Savica, 653 m, in Suha valley, 1150 m and Voje, cca 700 m. Train can bring you to Bohinjska Bistrica. A fine option is also the cable-car from Bohinj lake to Vogel, 1535 m.

The highest mountains are in the Triglav national park. So, please do everything to preserve nature! Here are some links to web pages where information is also in English:

Almost all parking places around Bohinj lake need to be paid. Also the road through Suha valley needs to be paid.

Months with the most stable weather are usually from July to October. For tour skiing the best months are from March to May. For weather see here. Even better site is wunderground - here's the direct link to Kredarica station, 2515 m (below Triglav summit).

Camping in nature is forbidden. High on the mountain nobody will tease you if you just make it over the night (and of course not close to a mountain hut). In any case you should leave the nature unchanged. Otherwise camps are in Bohinj and Trenta valley. For other touristic possibilities see the main Julian Alps page! Mountain huts of Slovenian Mountaineering Association:

A tourist page of Bohinj (in English): http://www.bohinj.si/en

Distant History Of This Page