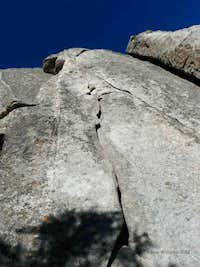 Bloody Fingers wall is home to one of the better crack pitches at City of Rocks, its namesake, Bloody Fingers (5.10a). The Falcon Guide claims that Intruding Dike (5.7) is another classic crack pitch (“super classic”) on this wall, but I beg to differ. The difference between the two routes, in comparison to other routes within their grade, is enormous. Bloody Fingers is superb from bottom to top, following one of the finer splitters in the park. Whereas Intruding Dike is broken up by a chasm and offers little in the way of 5.7 sustained climbing.

Bloody Fingers (aka Super Hits) wall is a small east facing wall located between Upper Breadloaves East and Provo Wall. Salt Lake City’s gym crowd hones in on the west faces of Breadloaves, in particularly what is known as Decadent Wall. For that reason I would be wary of trying to climb Bloody Fingers on the weekend during prime season at the City of Rocks. Even though most of these folks don’t appear capable of climbing a trad route at this grade, they can easily top rope it from the top of Intruding Dike. I have led or soloed all the routes published (2020) in this area and they are listed below.

EAST FACE  Listed Left to Right as you face the Wall