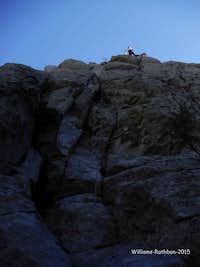 It’s Hard to Say No-5.8
Crack House upon first impression would appear to be a trad climbers dream at Castle Rocks. Unfortunately looks can be deceiving. In reality, despite the many fins, arêtes, roofs and cracks, there are few if any good routes on this wall. One of the main problems is that there are too many features, in other words, undefined lines. Crack House is on the north wall along the dogleg ridge that comes down from the main Castle massive to the east. If you are heading straight for Hostess gully from the trail head, you pass right under these routes as you make for the col that descends to Hostess gully (if you head for Hostess Gully circumventing the north end of Castle Rock).

I have climbed several of these routes and been disappointed each time. The abundance of features do not allow for any of the lines to have an identity or be sustained at their grade and most are 5.7’s to 5.8’s to begin with.  Bingham has It’s Hard to Say No (5.8) as a featured route.  He quotes the FAer’s as saying “Easily identifiable as the most appealing route on the wall.” It can be rapped with a single rope. It is located right across from several decent moderates on Poultry Pillar.

From the main Castle Rocks trail head, follow the marked trails north and turn west as you would head for Crack House and/or Hostess Gully on the north side of Castle. As you start up a switch back trail between Castle and Poultry Pillar, It’s Hard to Say No is on the left with a flat belay spot below.