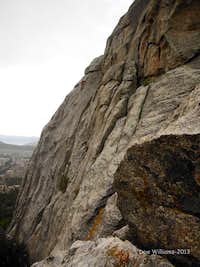 Jorge Urioste on Roadkill- 5.10b
Rabbit Rock is one of the larger features in the City of Rocks. Its name is derived from a much smaller feature off its southwest corner that looks very much like a rabbit from a certain angle. They call this smaller feature Real Rabbit Rock and the massive wall behind it Rabbit Rock.  Bingham’s guide book breaks Rabbit Rock down into three walls, Northeast, West and Southwest.  The west wall is much more popular and has more routes.    The north wall is the most difficult to reach and thus offers the more remote climbing. The Urioste family and I had it to ourselves on a Saturday during Memorial Day weekend. Although the routes are not as tall as the west wall, the north does offer several worthy objectives.

Hesitation Blues (5.7) and Roadkill (5.10b) are two moderate crack lines side by side that originate out of an interesting corridor at the base the northeast section of the wall. Dupree’s Diamond Blues (5.10a) is a spectacular finger crack in the north east notch of Rabbit Rock (the col between Rabbit Rock and Buzzard Perch), albeit it is quite short (30’). City Fathers (5.11d), put in by Dan Spurlock and Stan Caldwell during the 80’s, is supposedly an outstanding mixed route down the hill (south) from the others.

The more direct approach from the Parking Lot Rock trailhead is the col between Buzzard Perch and Rabbit Rock’s western face. There is a 5th class chock stone notch you can ascend directly to Dupree’s Diamond Blues or traverse more to the left to gain a gully.

This is a decent 5.7 crack climb. There are two cracks to the far left of the narrow corridor. Take the cleaner further left one. Hesitation is a straight forward easy crack climb. Do a gear belay up top and then walk north to the rap chains atop Roadkill for a 130’ rap. Dow

I am going with Bingham’s stars here, but this route is actually better, respective of their grades, than Hesitation. Climb the nice finger/hand crack through a bulge and onto a bolted slab above. The crux involves the first well bolted slab moves. Trend left to the rap anchors avoiding the clean crack straight above. 130’ rap. Dow


Dupree probably only deserves one star because it is so short (30’), but it is spectacular, showcasing a beautiful finger splitter located in the northeast notch of Rabbit Rock. I started out with 00 Metolius, then 0 Metolius before finally getting in a .3” piece. So it is really not fingers as much as it is balance for those first couple moves off the deck. Rap climbers left off a slung block. Can set a top rope with medium to large gear. Dow