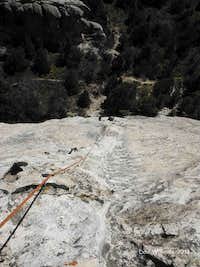 The most beautiful hiking at the City of Rocks can be found in what Bingham labels the North Fork Circle Creek area. One of the larger faces at the City is named Steinfell’s Dome which is accessed via a separate and dead end road named Circle Creek Overlook. This road is a right hand turn before you make the main City of Rocks right hand turn.  It is well signed and this trailhead services both the Steinfell area as well as the outback objectives to the east of the main reserve. Stripe Rock, the Great Wall and Tahitian Wall are several of the main climbing areas, but the rock croppings laid out in these huge flowering meadows are vast and varied. Stripe Rock centers the area and gaining its summit gives you a solid scouting opportunity to determine where you are going next.

Stripe Rock only offers a couple classics and they are in the low grade range, Dike of Gastonia and Cruel Shoes, both 5.7.  Gastonia is by far the most interesting of the two in that it follows a 250’  by meter wide dike from just above the ground to the very summit.  Cruel Shoes is more common if simply because it is a sport climb. The huge dike is obviously a more striking feature but offers less protection. Both are multi-pitch climbs.

Park at the Circle Creek Overlook Trailhead at City of Rocks. Follow the road beyond the gate northwest from the parking area. Take a left through another gate following the road through huge meadows.  Continue west and soon you will easily make out Stripe Rock as the dome shaped feature with a huge dike running up its left side (the “stripe"). Turn right after Bucketland (all well signed in 2013) and proceed through another gate at the creek. Cross the creek and head up to the base of the east face.

Dike of Gastonia- 5.7R**/ This could be the premier solo route at the City. It is deserving of as many stars as any other 5.7 I would assume, but it is not sustained at the grade (most of it is mid-5th class), thus the only reason I can imagine Bingham gave it less stars than Cruel Shoes, a sport climb to the right. It is very aesthetic.  Even if roped up, I see it as more of a two pitch climb than three. The first pitch is to access the start of the dike and contains the only 5.7 moves (slab). Some might consider this a bit run out, depending on experience I guess. I slung two trees and placed a piece to reach a huge slung horn at the base of the dike. To start the second pitch, pull the horn to start the dike and climb up the ladder! Your only pro from there will be slung horns. I chose to have my wife simul-climb on a 70m rope for less than 5 meters to reach the very top of the dike where I could establish a comfortable belay by slinging the top. Rap Poly-Stick-Em just to the right with a single 60m no worries. One of the raps is hidden in a hole, third one down I believe. Four raps to the ground. Dow

Poly Stick Um- 5.10c**, 4 Pitches/  An old school mixed route located between the popular routes, Dike of Gastonia (5.7R) and Cruel Shoes (5.7), on the sunny easy face of Stripe Rock.  You only need gear for the first pitch which is by far the crux of the route.  Between the first and second bolt, there are no gear options and a potential deck fall awaits just before the 2nd clip which involves slab moves at the grade. (MP.com gives it an R rating as of 2020).  Then some easier terrain following some gear options to another slab sequence at the grade protected by a bolt to a ledge with a fixed anchor to the right of a small pine.  The second pitch starts steep but is fully bolted.  A solid 5.10 move or two early on and then eases off to a fixed belay/rap.  It is easy to combine the final two pitches as the angle eases to the shared rap anchor with Dike of Gastonia.  Four raps to the ground with a single 60 or 70m.  A small selection of gear to #.75.  Some creative wire pieces might help protect the hard moves between the first and second bolt.  Dow

Cruel Shoes, 5.7***, 3 Pitches/ Fully bolted.  This route was rated 5.8 and named Blue Suede Shoes in an earlier guide.  In any regard, an easy simul climb for the competent party.  This route is over bolted.  I clipped fourteen bolts via simul climbing, but it would take more than twice that many clips over 350’ if you wanted to clip them all.  The first two pitches involve featured, fun and wandering 5.7 face climbing.  The last pitch is low angled 4th class to a fixed rap/belay. Need double ropes to make the first rap, a 70m does not reach. The last two raps easily go with a single 70m.  You can rap off the back and walk back around or go rap Poly’s rap if no one is on that route, with a single 60 or 70m rope.  Dow

Crack-a-Go-Go- 5.8R/ Dirty route that sees few if any ascents.

West Face, Routes Listed Left to Right as you face the Wall