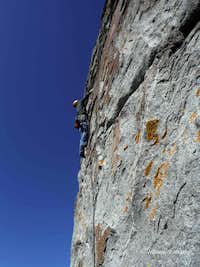 Dow leading Outland, 5.10b**
City of Rocks is not known for wide cracks (off width climbing). But the few that are out there are full on blue collar (i.e. Masochistic Opposite, Salty Dog). The clan I hang with pride ourselves in being alpinists and seek out the wide every chance we get. Salty Dog was top on our radar because it involved a cool summit as well which is coveted at the City. 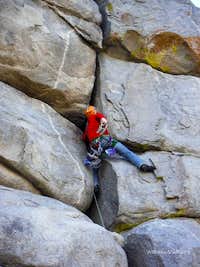 Dow leading Salty Dog, 5.10*
Finger Rock offers two decent leads, one full on trad, Salty Dog (5.10a*) and a mixed climb just to the right of it named Outland (5.10b**). Don’t let the guidebook grades fool you, I led both climbs back to back and Salty Dog is much more challenging than Outland even for the seasoned OW climber. Most grades at the City and SLC area in general are soft compared to California and/or the desert and Outland would be a typical 5.9 most places vs a 5.10b. Whereas but for maybe just a lack of local off width comparisons, Salty Dog will seem sandbagged at the grade. Add in the most pack rat/marmot infested (shit and sticks is what the route should have been named) wide crack I have ever climbed through as well as breaking a few holds on the outside of the crevice, Salty Dog becomes an adventure albeit of the one pitch variety. There are two other routes on the Finger Rock tower, but they are both top rope routes as labeled in the most recent guide.

Finger Rock is the furthermost northern feature to climb at the City of Rocks. Drive west past the Bread Loaves parking area on the left and continue down to a gravel road on the right labeled 562 (first right option after leaving the reserve proper). Turn right up this road which leads to more camp sites on USFS land. The lone tower/spire over looking these campsites from the east is Finger Rock (photo). Salty Dog is the obvious crack bottom to top crack on the west face. Outland is to the right on the south face. The belays ledges for both routes are just meters apart and the routes top out at the same end. Park by the restrooms and hike up the road and cut across left on a faint climbers trail.