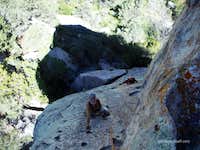 Jorge and Joanne Urioste climbing Original Route
Lost Arrow Spire does not quite live up to its namesake in Yosemite, but for a 5.7 lead (Original Route, 5.7***) at the City, it would be hard to beat. Although I have never placed any trad gear on it (makes for a great solo climb as well as has quite a bit of fixed gear on it as of 2017), it gives the aspiring trad leader ample choice to do so in conjunction with approximately four or five fixed pins. It also offers a true tower summit with a free air rap. So a pretty neat climb. The rap is on top of an excellent looking sport climb named Body Buster (5.12a***). The full page photo in the 2017 edition guide book makes the Original Route look much more vertical than it actually is. They turned the photo on its side. This original route is easy to lead in one pitch, simply extend the piton clips on the first pitch. The second pitch is 5th class at best anyway with no gear. Fixed rap on the summit for a 70m rope.

There are two approaches you can use to reach Lost Arrow and No Start wall. My preference is to park at the Flaming Rock trail-head and descend past Flaming Rock and Bumble Rock on their western flanks. Continue on the trail north pass Bumble Rock and through a fence heading west and eventually past Lady J on the left and then shortly after turn left on a trail cutting back north to in-between No Start Wall and Lost Arrow. Follow a decent trail up and left through some old trees to the base of an obvious flake. A shallow corner to the left of the flake has a piton in it (2017). This is the original route. Body Buster is on the rap line.