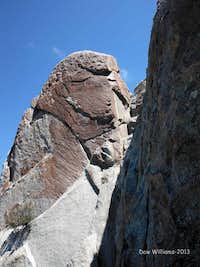 Southern Rock Opera, 5.11d
Castle Rock is the largest formation not just in Castle Rocks State Park, but in the entirety of the City of Rocks area. Although the Twin Sisters are no doubt taller, Castle Rock offers broader faces and thus the most established climbs on one feature in southern Idaho. Due to Castle's size and ease of access from the main trailhead at Castle Rocks State Park, it is also the busiest formation in the park. That being said, it draws most attention to its easier sport lines leaving several stellar cracks wide open no matter the holiday or season. 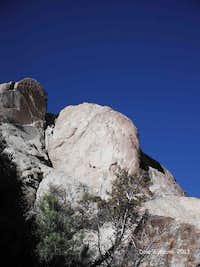 El Castleton, 5.10
The west face of Castle Rock starts with the popular arête route named Red Rib (separating the west face from the south face) and runs up into what they call Hostess Gully which is how you access the north face. Therefore, the majority of these routes receive a ton of afternoon sun and make for good cold weather climbing.  El Castleton (5.10) and Southern Rock Opera (5.11d) are two of the finer cracks in the entire City of Rocks area and Bingham gives them their due in his local guide.  Popular sport lines include Red Rib (5.10a), Between Heaven and Earth (5.9), Zinger (5.8) and Fruit Pie (5.7). The routes on the right side of the wall located on a separate buttress can all be done in one pitch but most will require doubles to rap. Many of the routes on the left face require multiple leads to the summit.

Park at the main Castle trailhead. Do not park in non-designated parking spaces, I have seen the rangers give tickets for that, rather use the overflow parking back near the ranch house if the main trailhead is full.  Hike west towards Castle Rock and circumvent it to the south via a well-established trail. The climber trails up to all the routes on Castle are well established. 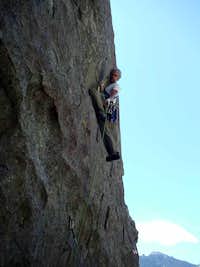