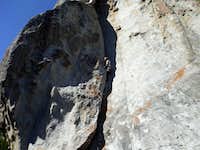 Dow leading Vertical Turtle, 5.9***
Across from the famed (Idaho’s version anyway) Lost Arrow Spire which has a very popular 5.7 climb on it, sits No Start Wall. Despite the boring name, this is actually a significant rock at the City. Its striking vertical south face is almost 200’ tall offering 150’ single pitch routes which is unusual at the City. I got lured into climbing an off-width on this face, aptly named, Vertical Turtle (5.9R***). Vertical because the wall is vertical, turtle because of the slow off-width form of climbing. For some reason, the guidebook author inflated the stars he gave this route (his own) from one star in his last edition to three stars in his 2017 edition guide. It is just a one star route if for nothing else than the quality of rock or lack thereof (my belayer could have filled a bucket with sloughed off debris). There is another moderate on the eastern arête named Pig Arête (5.9**). Decent enough in that if you are already climbing on No Start, it might be worth doing, but again, a single star route at best.

There are two approaches you can use to reach Lost Arrow and No Start wall. My preference is to park at the Flaming Rock trail-head and descend past Flaming Rock and Bumble Rock on their western flanks. Continue on the trail north past Bumble Rock and through a fence heading west and eventually past Lady J on the left and just below Lady J, turn left on a trail cutting back north to in-between No Start Rock and Lost Arrow. Vertical Turtle climbs the right side of a slightly detached pillar on the south face (east end) of No Start. Pig Arete climbs the broad arête at the east end. Their starts are just a few minutes apart. A similar adventurous route in the same league as Vertical Turtle is the Box Top Traverse (5.9***) which is every bit deserving of its three stars. To do that route along with these, park at the Boxtop Trail-head (campsite #10) and descend past Boxtop and make two creek crossings, then turn left on a trail heading for Lost Arrow and No Start, turning right up a trail to reach the climbs.