Known to the Native Americans as Wahatoya which became the Spanish Huajatolla and later one of the Dos Hermanos (2 brothers), West Spanish Peak is the higher of two mountains far above the town of La Veta.

"The prominence of the Spanish Peaks has resulted in a different name or spelling by every people who lived near them. The Indian name (which means "Breasts of the World") is spelled at least three different ways in the area; Wahatoya, Huajatolla and Guajatoyah. The first is the more common because it pronounces phonetically and is easiest to spell."--billokc

The pair have been landmarks since the earliest times and cannot be missed from I-25. wayneaflick notes, it is the highpoint for Las Animas County.

Although not technically difficult, West Spanish Peak offers as much vertical as you want. Depending where you start, up to 5,800 ft. is attainable. The standard route is a very reasonable 2,400+ feet of gain, however if you are familiar with any of the lesser known routes please submit them.

The Spanish Peaks geology made it a National Natural Landmark in 1976, designated as a Wilderness Area in October 2000, and dedicated in September 2001.

To the geologist the Spanish Peaks are prime examples of a "stocks" which are defined as large masses of igneous (molten) rock which intruded layers of sedimentary rock and were later exposed by erosion. East Peak is a nearly circular intrusion about 5.5 miles long by 3 miles wide while West Peak is a mass about 2.75 miles long by 1.75 miles wide.

The area is also known for it's volcanic dikes. These structures were formed by magma filling cracks in a sedimentary layer. That layer later eroded away leaving the dikes. The term "Dakota Walls" has also been used when referring to these formations.

A good description of the formation of these igneous peaks and the surrounding volcanic dikes is found here.

Special thanks to billokc for his contributions to this section (as well as the rest of the page).
In the early morning hours of October 4, 2008 a 3.4 magnitude earthquake occured in the area. The epicenter was first marked as being about 4.16 miles SW of Trinchera Peak.

The epicenter was later determined to be about 12.3 miles SE of East Spanish Peak, or about 5 miles south of the town of Gulnare. No damage ocurred in the area, but it was felt in Gulnare and also Cuchara. 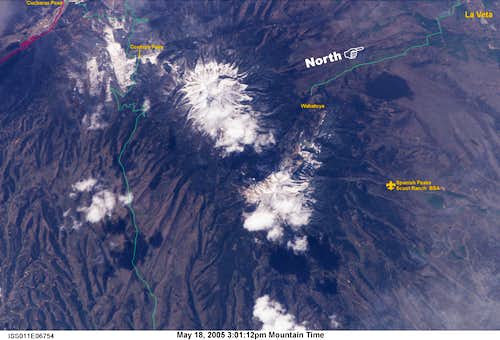 If you are interested in other starting points Guide to Colorado Mountains by Randy Jacobs comes recommended.

This trailhead is a fee area.

Pay on arrival (they'll snag you for it) at the fee box near the restroom facility.

A list of regulations are also located at the fee station.

The West Peak Trail has a sign-in station a short distance inside the trailhead.

Due to the easy, close access of the peak from Cordova Pass, climbing West Spanish Peak can be done anytime Cordova Pass can be reached. This has been done as early as April and as late as Thanksgiving.

Summer can be tricky due to the thunderstorms that quickly develop, particularly in July and August. Start early in the morning and plan to be off the summit around noon or shortly after. Keep your ears tuned for thunder!


Late May through mid-July offers very early morning starts. September and October offer good opportunities since the storm season is over by then.

The fees listed here are for 2009.
Cordova Pass Campground: $6.00 for trailhead camping. You're allowed ONE NIGHT MAXIMUM camping at Cordova Pass.
NOTE: As of early July 2009, the sign stating the ONE NIGHT MAXIMUM has been removed. It's unknown whether it's a result of the Forest Service or vandalism.

There is more civilized lodging in La Veta, Walsenburg or Cuchara. Cuchara comes recommended by Kane and billokc.

With the advent of cell phone technology, many folks carry these items now. From the high country of the Spanish Peaks, cell service is not a problem.

In early February 2009, cell phone panels were mounted on the water tanks in La Veta (proposal of a tower was strongly opposed for good reason), and there's also a cell tower in the vacinity of La Veta Pass.

There's also service coming from Walsenburg, Trinidad, and other points easily hit from the higher elevations.

The provider of the cell panels has stated they will next look at Cuchara for panel placement. Local residents have offered to assist in that process.

The lastest update on cell service:
Area cell service may further improve in the area at the expense of aesthetics. County commissioners have approved placement of towers in a few locations near US 160. A 120 foot tower was approved for placement in an area north of the La Veta airport and another was approved near the top of La Veta Pass (9/8/09).

You're back at the trailhead and thoughts naturally turn to food and drink, so where do you go?

Nearby:
Cuchara:
The Dog Bar & Grill serves the best pizza in the Cucharas Valley (after 5) and the usual fare off the grill along with a wide variety of adult beverages. It is located around the corner from the Cuchara Country Store complex and there is a webcam showing the exterior of the building.
The Timbers located across the road from the Cuchara Store is good and offers a finer cuisine.

There are a couple of breakfast options in Cuchara. If you're staying at the River's Edge B&B and the Dodgeton Creek Inn breakfast is provided for you. The rooms there are very nice and the larger rooms are equipped with kitchen areas.

The Main Street Diner on Hwy 12 in La Veta opens at 7am with an excellent breakfast menu, or you can stop in Sammie's for breakfast.
There's also the Ryus Ave Bakery.

Across the road from the Dog Bar & Grill is the Cuchara Inn. Some rooms are furnished with kitchenettes if you prefer to do your own (been there done that--billokc).

Corine's Mexican and American (822 S. Main St.) has great Mexican food but limits the beers to Budweiser and Michelob. $7-10 for dinner, no credit cards.

There's also George's Drive-In and Andy's Smokehouse BBQ on the north end I-25 exit of Walsenburg.


On the way back to Denver Metro:
Johnson's Corner in Buena Vista:
Coyote Cantina Convenient if you want to split that 4 hour scenic drive back to Denver in half.
Phone 719-395-3755. Located at 12985 Hwy 24 & Hwy 285 junction.
Great Mexican food and margaritas with a view of the Sawatch.

For more about the Cucharas Valley:
Cuchara Valley