Huerfano Peak...what does it mean? Well, it means "Orphan Boy" in Spanish and this peak sits very close to Blanca Peak one of the four cardinal sacred peaks. This shy little peak also sits about one mile north of its much more famous, and more often climbed neighbor Mount Lindsey. While not a 14er, Huerfano Peak (Unnamed Peak 13,828) is one of the hundred highest peaks in Colorado known as the Centennials. The views of Mount Lindsey, Blanca Peak, and Ellingwood Point you see from Huerfano are fantastic and you will almost certainly enjoy complete solitude as well.


Getting There - Huerfano River Trailhead

To get to the Huerfano River Trailhead, take Interstate 25 to Walsenburg, Colorado and take exit 52. In Walsenburg, head west and then north on Colorado Highway 69 for 25 miles to Gardner. Just past Gardner, turn west on an exit marked for Red Wing. Follow this first paved, then 2wd dirt road for 23 miles until it dead ends at the trailhead. This road is always in great condition to the Singing River Ranch but beyond this point the roads gets rougher to the trailhead. Tough passenger cars driven carefully can usually make it the whole way but it is likely sedan type cars will bottom out a couple times. My Toyota station-wagon made it fine. The final half mile to the trailhead is the steepest part and since it is pretty loose, some rear-wheel vehicles may not make the last little bit. There are however many places to pull off and park. In the winter this trailhead is snowed over and very rarely open beyond the Singing River Ranch. 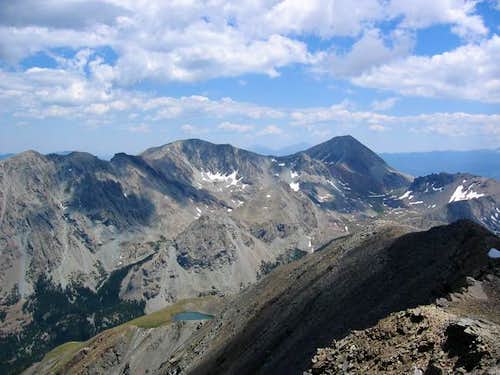 From the trailhead, take the Huerfano River trail south into the beautiful Blanca Basin. Stay left a little over a mile in where the trail forks for Lily Lake. Cross the Huerfano River just past this signed junction (tricky in high water), and continue along the well defined trail as it turns east and sharply ascends a long grassy valley leading into a 12,000 foot basin under the stunning north slopes of Mount Lindsey. Continue on the Mount Lindsey climbers trail to the 13,000 foot Lindsey/Iron Nipple Saddle. At this point, Huerfano Peak can be seen just to the northeast. The well defined trail will head south to the NW ridge of Mount Lindsey at this point.

View from the trail to Mount Lindsey

Instead of heading to Mount Lindsey however, turn north at the saddle, and ascend a gradual class 2 slope toward the steep bluffs of the Iron Nipple. After crossing through a prominent notch, descend below and to the right of the major difficulties of the south face of iron nipple, and continue on an ascending traverse of a boulder field to regain the Iron Nipple/Huerfano Peak ridge. Continue on mellow, grassy, class 1 and 2 slopes to the summit of Huerfano Peak. The final 50 yards to the summit hold an interesting surprise where the gentle slopes stop abruptly at a false summit. A short, jagged connecting ridge runs over to the true summit that involves a more challenging class 2 section. From the summit feel free to sign the climbers log and take in the views in all directions.


Winter Climbing
This peak can be climbed year round however take note that a winter ascent will be a long slog since the Huerfano Trailhead will not be accessible. This part of Colorado typically gets less winter snowfall and often melts out much sooner than other mountain areas in the state. There can be times where there is hardly any snow in January allowing for October like conditions in the winter however there can also be many feet of snow covering all the slopes making avalanches a serious problem. Be sure to check current conditions before heading out and plan accordingly.

Summer Climbing
In the summer, Huerfano Peak and all other Sangre de Cristo Mountains are notorious for downright brutal thunderstorms that can last well into the night. It is very important that you be off summits and ridges by noon. I have also seen thunderstorm clouds move in from the southeast so don't expect to be completely safe if you see clear skies to the west or south. Approach the Sangre de Cristo Mountains with respect for the weather and always be prepared for the worst. 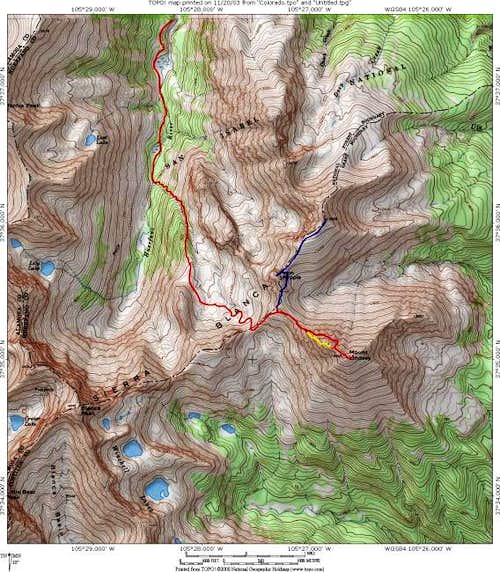 Shown at left is a map of Mount Lindsey and Huerfano Peak provided by Kane.

There are no developed campsites at the trailhead, but plenty of good spots all along the road. Some parties prefer to backpack a few miles in on the trail and set up camp in the charming basin at 12,000 feet. Be sure to note that bears frequent the Huerfano River Valley. Many people have had unpleasant experiences with bears here, so make sure you take all necessary precautions to avoid late night visitors. No permits are required and camping can be found anywhere. Pay close attention not to trespass on the Singing River Ranch which you drive through to get to the trailhead. This is the only area along the road you are not allowed to camp so make sure you see and pass the National Forest boundary before setting up camp. 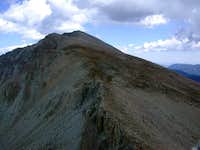