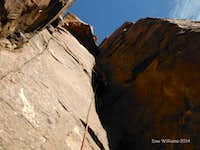 Zacker Cracker- 80’-5.9
Some of the earliest routes in all of Red Rock were put in by Joe Herbst during 1972-1973 along Highway 160 between Pahrump and Las Vegas. Chocolate Rocks represents the most southern climbing objective in all of Red Rock. As the name implies, this south facing collection of short walls is heavily varnished and thus offers up the same quality of rock as can be found on the Brownstone Walls in Juniper Canyon. This collection of single pitch routes are fairly short and offer mostly trad climbing. Those facts combined with a short but steep approach make Chocolate Rocks a seldom climbed area. 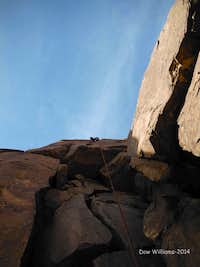 Peanut Butter and Jam-80’-5.9+
Several of these routes deserve accolades even though Handren only gives Peanut Butter and Jam a recommendation in his guide. The Gallows, albeit very short, offers a spectacular roof problem for the grade (5.10b). Handren has it at 5.10b but it is an old route and other websites have it as hard as a 5.11-.  I found it somewhere in between. This is one of those routes you will lead better the second go around simply because there is a flaring committing hand jam at the end of the roof that is hard to see on your first go. Zacker Cracker (5.9) again is rated higher on other web sites than what it was labeled in 1972 and I concur it easily has a few 5.10 moves on it. Advertised as an off-width, I used little off-width technique the first time I led it. It involves two wide sections (a C4 #6 and #5 protect both) with the second one being the crux. I did a full 360 utilizing a variety of micro features on both walls versus off-width technique. Peanut Butter Jam (5.9+), even though rated harder by Herbst than Zacker Cracker, is quite a bit easier and does offer more of a true off-width experience at its finish. This one is the most aesthetic splitter of the group. The 5.6’s and 5.7’s that surround these mentioned routes offer a great training ground on solid rock for the aspiring trad leader. There are two fixed stations, one above Shortcake and another above McCracken. This cliff faces south and receives tons of sun.

At approximately 7 miles west beyond the Highways 159/160 junction is a bridge built along a steep grade side on the road up to Pahrump. Right before the guard rails begin is a small (2-3 vehicles) pull out in front of a pedestrian access gate in the barbed wire fence. Follow the old road down to the wash and identify a well cairned trail that heads northwest up to the western end of the cliff where the routes are located. There is an easy short scramble through the lower cliff band to reach the base of the climbs above.

Routes Listed Left to Right as you Face the Crag Jorge celebrating his birthday with a cactus as old and tough as he is.