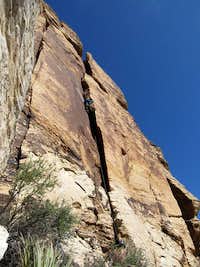 When chasing down obscure off-widths in Red Rock, there is no better partner to have than Danny Urioste. While many climbers practice the same moves on the same routes over and over, Danny and I share enthusiasm for the unknown. Slot Club Wall is not remote in terms of approach or hard to find as much as it is rarely visited as there is not much climbing to be had on this crumbly lower flank of Mount Wilson. Slot Club Wall sits across the much more popular Lotta Balls Wall (Indecision Peak side of First Creek Canyon). A 300’+/- gain up the north side of First Creek lands you at the bush choked base for Slot Club Wall.

There are three lonely routes, all crack climbs, that are best found by spotting the most varnished features from the canyon floor. Slot Club itself if the reason for the visit. It is a fun and tall left facing off-width corner climb. Pinball is the hand crack climb in the middle of the two off-widths. The Closet is another left facing off-width crack on the left side. The Closet and Pinball share the same fixed rap. Slot Club has its own rap off of passive gear that does not rap the route but rather raps straight down with a 70m rope (just).  Handren’s gear call for Slot Club is double to 7”, but I did not place any C4#6s.  However, I did find use for two #5’s. It is a full on relatively tall pitch worth the hike up. The other two routes are only worth doing to fill in the day. Full south facing wall.

Park at the First Creek trail head. Follow the creek in as you would for any climbs in First Creek and cross the creek to the north at a small waterfall/pool. There will not be much of a trail from there, just meander up the hill on the north side to the base of Slot Club. Slot Club is the most identifiable of the three routes. I have a marked photo included.

The following route is way out left, past Dirtbaggers Compensation, not part of Slot Club, but on its own as a single pitch way out left