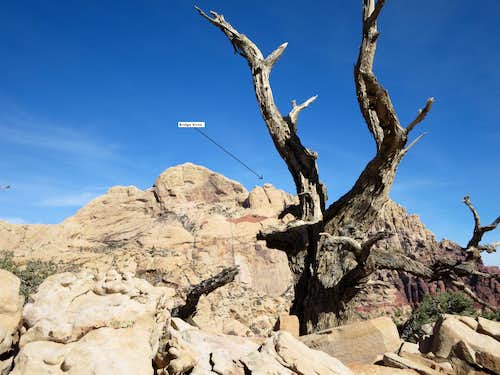 View of Bridge Vista from south
This is a similar climb to the route to Bridge Point taking a turn toward the west once you reach the saddle between Bridge Mountain and Bridge Point. It can easily be combined with a trip to Bridge Point since you have put in 95% of the climbing effort just to reach said saddle. There is less than 200’ prominence, but the vertical drop is probably 2,000’ into Fern Creek Canyon from the south edge of the ledge winding below the summit block giving it a much more mountainous feel as you approach the final class 4 pitch on the summit block.  For these reasons, this is a popular destination for locals and is the “Queen of Diamonds” for the local 52 Peak Club members. 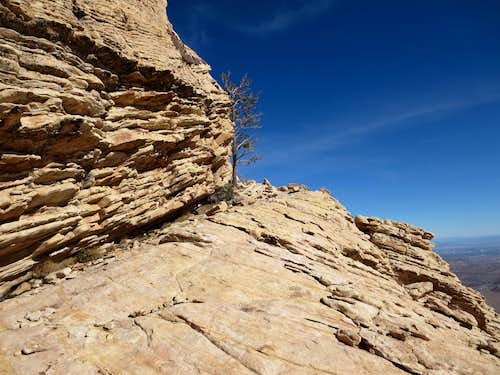 Ledge above Fern Creek on south side of summit block
Begin hiking west into Pine Creek Canyon. There is an old foundation you will encounter on your left as you make your way in. To this point you have been following a trail which forks. Take the right fork of the trail. As you approach, the pyramid shaped Mescalito Peak towers before you. Mescalito splits Pine Creek canyon into two forks. You must stay to the right side of the Mescalito which is Fern Creek canyon and proceed up canyon. As you hike in further, the trail ends near the base of the Dark Shadows technical route on the NE corner of the Mescalito.

Your next goal will be a usually small waterfall that is coming out of the south fork of Fern Creek, a branch of the canyon that heads to the left of the main canyon you have been following. For another description of this route I've attached a writeup of the Scramble from Pine Creek canyon(Fern canyon). 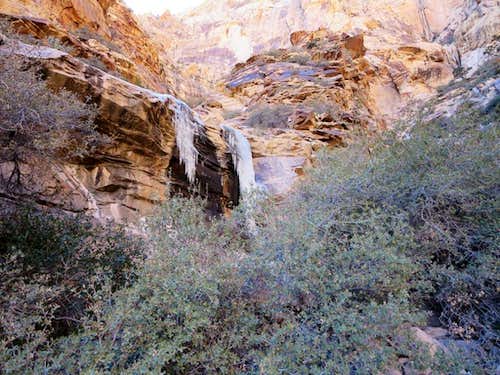 When you reach the saddle, cross over and begin descending toward your left to remain on class 2 and 3 terrain as you begin to approach the base of Bridge Vista. The route initially drops and then begins regaining altitude while it circles counter clockwise closer to the summit. When you finally reach the vicinity of the summit block, you are on the west (Bridge Mountain) side and there is a ledge system along its south edge above Fern Creek canyon that you follow back toward the east as shown in the photo. There is a tree at the base of the final class 4 pitch that leads to the top. A rope may be anchored there, but be careful what you trust since the sun is at work most of the time in this location. 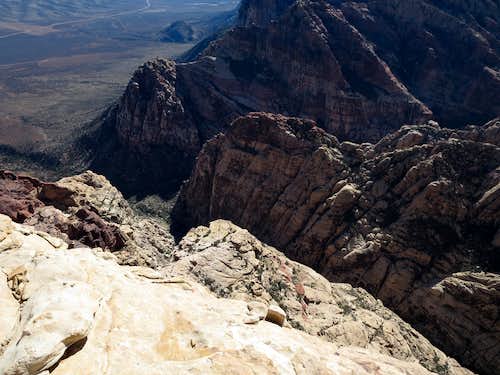 view down to fern creek canyon

Spring and Fall are the peak seasons as it becomes quite hot in the summer. Winter can be an excellent time as well unless snow and ice accumulate from winter storms making the scrambling too hazardous. This is most likely to occur in January and February

There is a campground located south of SR159 two miles east of the entrance to RRCNCA. There is no developed campground within Red Rock NCA, although backcountry camping with a permit is allowed