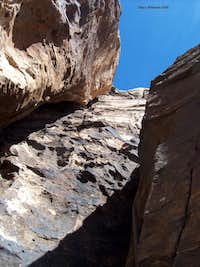 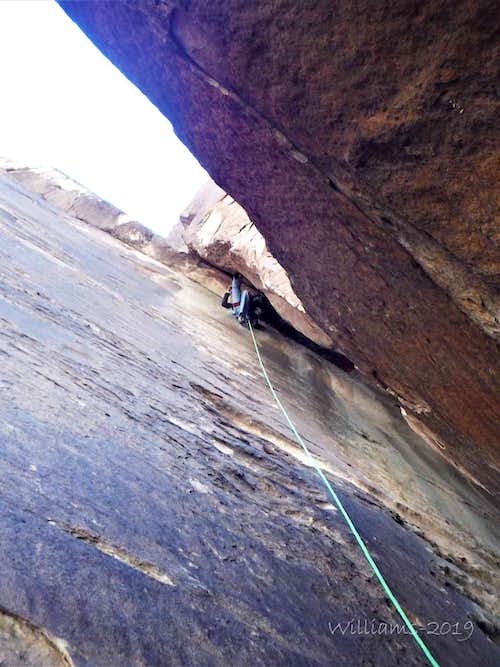 Dow leading Jaws II, 5.10b
Rose Tower sits between Juniper and Pine Creek Canyons. It gets its name from reflecting a pink hue in the morning sunlight on its upper eastern face. From the east the climbing looks quite chossy and short, but from the south (Juniper Canyon’s south bank) the dome like Rose Tower gives off a much more favorable impression. Rose Tower has six published routes as of 2008, all traditional lines. By far the most popular of them is Olive Oil- 665’- 5.7, another classic Jorge and Joanne Urioste route put up in 1977. Olive Oil had been the subject of consternation when someone added bolts (to a perfectly protected trad route with the exception of a few easy run out sections) for stations and protection. The problem was that the stations can all be easily built with gear as well as any crux moves on the route can be easily protected. In any regard, as of 2008, all of the bolts on this route have been removed. The original route on Rose Tower was actually put in a year earlier by Joe Herbst and Larry Hamilton, Original Route, 700’, 5.7. It follows a much less desirable (more broken) right line up the southeast face but shares the last pitch of Olive Oil.     Park at the Pine Creek trailhead. There are two approaches to Juniper Canyon. Either hike down the main Pine Creek trail and traverse around the old home site to intersect Oak Creek Trail, or locate a more indistinct trail at the Fire Ecology Loop. They both require crossing Pine Creek ascending up to the south bank. In any regard, you hook into the Oak Creek trail which runs north and south below Rose Tower and Jackrabbit Buttress. Take a right onto the Juniper Canyon approach trail and take the 2nd distinct trail that leads up to a vegetated gully between Rose Tower and Jackrabbit Buttress. The first right turnoff leads up the descent gully for Rose Tower. The best way to discern the left corner of Rose Tower at this point is a significant roof off the ground about 30m. Head into the gully hugging the southeast corner of Rose Tower (left of the roof). Scramble up boulders several hundred yards to a deep left facing chimney on the right side of the gully. This is the base of Olive Oil and a reference point for the other routes on Rose Tower.

The Routes are Listed Right to Left as you Face the SE Face of Rose Tower
Original Route- 700’- 5.7/
Olive Oil- 665’- 5.7/ Have soloed this route twice in the past few years...to me it is one of the safer solo opportunities at Red Rock...tons of traffic thus clean rock, little if any exposed slab and a walk off.  With a 70m rope, you can convert Olive Oil’s five to six pitches into four. The 2nd-3rd pitch combined was a fantastic pitch of 5.7 classical Red Rocks climbing. The last pitch involved some fun chimney aspects as well. In 2008, on the first pitch, someone had left a bail sling slung on a horn with a rappel ring. From below, this looks like a fixed station. Do not head for this sling, otherwise you will have to down climb. Rather the route goes right into a small sandy ledge below a corner. Dow
One-Armed Bandit- 490’- 5.7/
Jaws II- 250’- 5.10b/The first pitch is a secure and easy solo, if a competent 5.10 climber, up a left facing corner.  It ends in the bottom of the wide chimney that begins the 200’ main pitch of the route.  The crux pitch involves run out chimney climbing below the grade (5.9) before finally placing gear in chossy cracks that arch over to an eventual roof pull on chossy holds to a finger/hand crack up a left facing corner yet again.  Near the top of the corner it widens to easy chimney on much better rock for the finish.  This last section of the 2nd pitch is run out on easy terrain to the outside or a squeeze protected with large gear inside.  You finish on top at a ledge below a chossy face above.  The last pitch is run out face climbing, mid 5th at most, to a left facing corner that leads to the very top of Olive Oil, via the left side of the same feature that Olive Oil tops out on.  Walk off as for Olive Oil. Dow
The Deep- 5.9/
Finding Nemo- 5.9/

Descent off of Rose Tower

All the routes eventually take you to the top of Rose Tower via 4th class scrambling to finish them off. Once at the summit, descend some slab mushroom features to the west, down climbing a few exposed steps along the way. The descent gully is on your right. Scramble back down the gulley to hook into any numerous trails that head back northeast. If you are going to leave bags or gear at the base, it is best to do so before you head up the gully to the south of Rose Tower. There is a roof on the east face with a small alcove below it. This is a good spot to gear up. To catch this spot on descent, you will have to scramble back right before you descend all the way to any trail.

Regarding Olive Oil, I highly recommend a 70m rope or simul climb pitches 2-3 and pitch 5 which is more than 200’ to a comfortable belay. With a 70m rope, you will belay in a comfortable spot on all occasions and the route will go quite a bit faster. These are all trad lines and will require an assortment of gear as spelled out in Jerry’s Handren’s “Red Rocks, A Climbers Guide”. The summit of Rose Tower allows for a quick descent to the north. Carrying shoes up for this descent would be worthwhile. The routes are southeast facing and most pitches are quite sunny, but several of the belays can be shaded due to corners, so if spring climbing, take a jacket.