Magic Mountain is often an overlooked destination at Red Rocks but its north face has 21 published routes as of 2008, the most popular of which is no doubt Community Pillar. Community Pillar and Honeycomb Chimney both run up the gut of the north face of Magic Mountain, almost a 1000’. The majority of the other lines are much shorter. 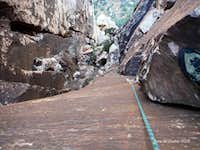 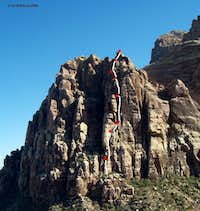 agic Mountain is the inconspicuous piece of rock on the left side of Pine Creek Canyon before you reach the mouth of the canyon as it exits from Mescalito. On the back side (southwest) of Magic Mountain is the Crabby Appleton area on the lower reaches of Juniper Peak. Once on the summit of Magic Mountain, that would be a great opportunity to scout out the Crabby Appleton wall. Because all of the climbing on Magic Mountain is on its north face, these objectives make for much better spring-summer-fall objectives versus winter ones. The chimneys that make up the Honeycomb and Community Pillar routes are some of the cooler climbing opportunities at Red Rocks when the temps are hot.

The descent for the routes that reach the summit ridge of Magic Mountain are unique in that you can use the same walk off descent that is used for the Rose Tower routes. After reaching the summit, descend south to the Rose Tower and Magic Mountain col and walk down the east facing gully to Oak Creek Trail. You park at the Pine Creek trail head which can be reached off of the Red Rocks Loop Road. Hike towards the canyon, venturing left at the “old home site”. Follow the trail on the left side of the creek, but avoid climbing back left towards the Oak Creek Trail. Continue heading into the canyon and work to identify which objective you are after from this view point. Angle up the hill, via no trail to speak of, towards your route of choice. The brush is too thick for you to circumvent the wall at the base of Magic Mountain, so head for a spot right below what you are climbing. 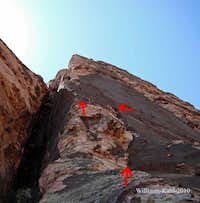 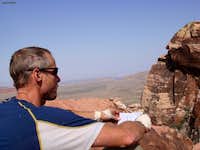 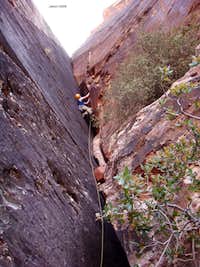 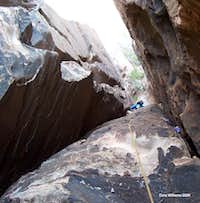 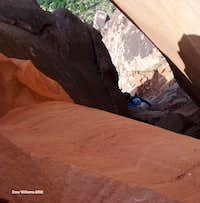 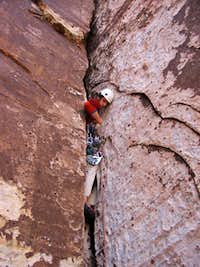 These are all trad lines with an assortment of fixed pro here and there. They all will require an assortment of gear as spelled out in Jerry’s Handren’s “Red Rocks, A Climbers Guide”. The routes that reach the summit can be walked off via the Magic Mountain-Rose Tower col thus a single 60m rope for the ascent would be adequate. Many of the other routes require double rope rappels. Magic Mountain is a better spring-summer-fall destination versus winter due to all the climbing being on the north face. Dress accordingly.