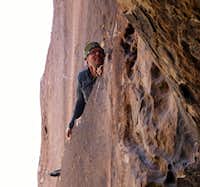 Dow soloing Get Rad, 5.8***
Above photo: Dow leading Dark Arts, 5.9
I took the time to climb Azkaban Jam, 5.9* years ago when descending the gully behind Whisky Peak after climbing Ixtlan. I remember liking the route and the rock. I finally returned with the Urioste family making Rad Cliff our destination for a day. They climbed Chamber of Secrets, 5.7**, while I soled Get Rad, 5.8***.  Get Rad ends at the start of the 2nd pitch of Chamber. Those two pitches together, Get Rad to Chamber of Secrets, make for outstanding climbing at the grade.  All nine routes on this left side of Rad Cliff are served by the same slung tree rappel down the route named Dementor. 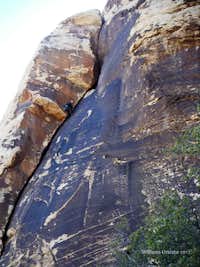 Dow leading Cadillac Crack, 5.9*
Moving to the right side (west) of Rad Cliff you have to descend the slope and re-ascend to the base of a different grouping of routes further up canyon.   This wall is home to no doubt the most popular route on the expansive Rad Cliff, Cadillac Crack, 5.9*.   Cadillac closely resembles Weenie Juice over in Icebox Canyon except it is quite a bit easier, but with the same arching style with wide climbing. Dark Arts, 5.9, is a must if you are climbing Cadillac and they both finish to the same fixed anchor. We used double ropes to make the rap for these two routes. But they both curve quite a bit, so a 70m might make it.

Hike up from the trail head for Black Velvet Canyon and head up the switch back trail to the base of Whiskey Peak as you would for any of the Whiskey Peak routes. Turn left on the main trail circumventing Whiskey Peak and hike up the descent gully behind it for a few meters before traversing left across the gully (Rad Cliff is located on the south side of the gully equating to mostly shade) depending on which routes you want to climb. The photos highlight the can’t miss features. For the left side that would be Get Rad which is a wide right leaning splitter in a fat right facing corner. Cadillac Crack and Dark Arts are located in a dark varnished arch further up the gully.