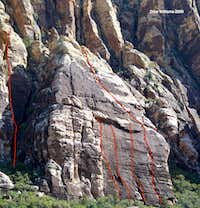 Necromancer
Necromancer is a sound black varnished wall located across from Frigid Air Buttress in Icebox Canyon. It is a short and sheltered wall with a quick approach and thus can be quite popular on a windy day. The Necromancer Wall takes the form of a triangle with one of the routes detailed below actually off the main wall and in a corner to the left of the descent gully. None of the routes are over 2 pitches in length (albeit the pitches are long), but the quality of these trad routes attract climbers just the same. The clinic on placing protection at Red Rock Rendezvous should in fact be held on Sensuous Mortician, one of the finer single pitch trad routes anywhere for the grade (5.9). Placing pro on Sensuous Mortician takes patience and thought.

Sensuous Mortician, 5.9
Necromancer is located on the south side of Icebox Canyon and directly east of Frigid Air Buttress, thus the protection from the swirling canyon winds. My first perspective of Necromancer was from climbing the Frigid Air Buttress route and observing the fine rock and lines below. Like Frigid Air, Necromancer can be a cold place to climb in the winter but offers ideal shade for spring and fall climbing at Red Rocks.

Park at the Icebox Canyon trailhead. Proceed west towards the canyon on the well-marked trail and be patient to avoid bushwhacking. My partners ran into a rattlesnake because they were a tad impatient and ventured off of the trail from the right side of the wash too early. Wait until you are directly across from the wall and then descend into the wash and find a faint trail on the other side that meanders up the hill to the base of Necromancer. I was racked up by the time they bushwhacked their way to the base.


Atras is actually to the left of the descent gully. You could easily pass on this route and not miss much. The first pitch offered two decking opportunities via ledges that were hard to protect to avoid a deck fall. The first pitch of Atras was also athletic in that it offered a variety of climbing, off width, crack, face….some huffing and puffing for sure, but somewhat dirty as well. This route rarely sees any action. Once through a fun stemming crux move that is well above the two ledges before mentioned, follow the dirty crack with trees to a large ledge on your left. Belay off of a tree on this ledge below a huge roof. The 2nd pitch can go left via a squeeze (5.8) move on fragile rock through the roof, or right of the roof by way of easy face/chimney climbing (5.7) to the top. Dow


Fold Out is a fun and easy route for the grade by Red Rocks standards. The first pitch follows the obvious wide crack running up the right side of Necromancer. Tons of protection exists whenever you want it. The crack thins towards the top just like the last pitch of Birdland over on Spectrum Wall. This thin portion is the crux of the pitch. The 2nd pitch traverses out aggressively to the left directly above the rappel station for Sensuous Mortician. Follow the horizontal crack on large holds and pull an easy roof above into a scoop of light colored rock. Continue trending left over a single bolt (but hard to see) onto easy but run out ground that follows a seam up to a tree with rap slings (2008) that can be used in conjunction with Sensuous Mortician’s rap for two raps to the ground with double ropes. Otherwise scramble up to the top of Necromancer and rappel down the descent gully to the east. Dow

Most routes can be rapped back to the base of Necromancer and this is recommended if no one is directly below you. If the wall is busy, it is best to use the gully to the east which requires 3 short rappels and a little down climbing. Start with a small tree with rappel slings to the right of the top of the gully. You can use a single rope, but that 2nd rappel will require a little down climbing if you do it in three rappels total whereas the first and last rappels are quite short. Scramble back left to the base.