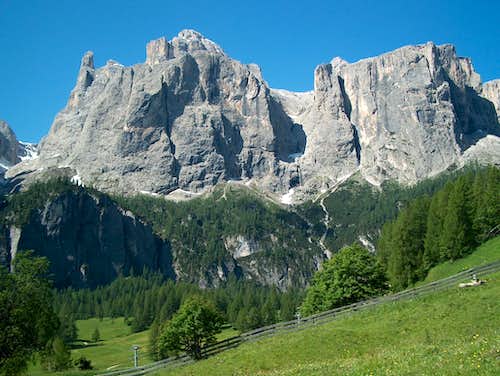 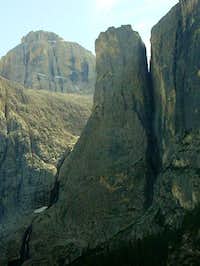 Cima Pisciadu and Exner tower
Sella Group is one of the most outstanding groups of Dolomites. From anywhere you look at it, it appears as a huge castle, surrounded by high defence walls and with up to 3000 m high peaks like towers above the walls. On the northern side of Sella Group one of such peaks is Cima Pisciadu.

Of course the Sella castle is not monolithic. Several valleys and gorges cut the outer walls and also Cima Pisciadu is surrounded by some of them: Val de Mezdi on east, Valun di Pisciadu on west and part of it the high valley of Tita on south. On the north-west side, on foothills lies a beautiful Lake Pisciadu (2564 m) with a mountain hut above it (Rif. F. Cavazza al Pisciadu, 2585 m).

Because of a marked route, a nearby hut, the panorama road over Passo Gardena (Groedner Joch) and well known Dolomites tourist resorts, Cima Pisciadu is often ascended, although it is far from being one of the most popular Dolomites peaks. The ascent still requires overcoming more than 1000 m of altitude and is on some parts also quite demanding. But you will be rewarded with astonishing views on wild scenery around and with a broad panorama from the top.

RenatoG - The view towards the north...

RenatoG - ... and towards the south

The third option is to park south of Colfuschg, 1640 m. There the marked path into Val de Mezdi goes (No. 651). That approach of course excludes the attractive Via Ferrata Tridentina, but allows us to do a broad round tour on Cima Pisciadu.

And finally, you can also approach Cima Pisciadu from the south, crossing the whole Sella massif. That would mean starting the tour on Pordoi pass, going up on the massif with cable car and then continuing the tour northwards (ascending Cima Pisciadu and then eventually sleeping in Rif. Cavazza). 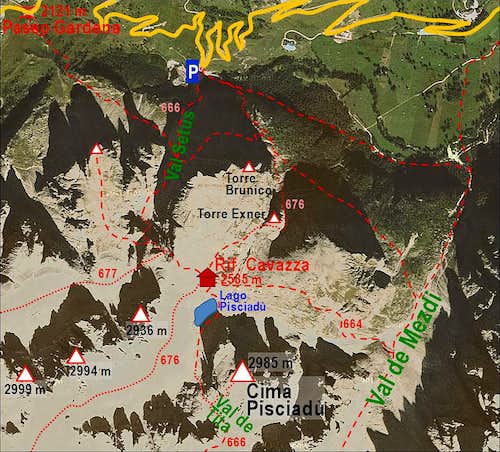 The first goal of ascent Cima Pisciadu from the north is to reach Lake Pisciadu (and the nearby hut). The options are the following:

1. Through Val Setus. If you start on Passo Gardena, a long traverse leads you into Val Setus, where you join the route from 1956 m parking place, which ascends more directly. Then you climb Val Setus, cross a broad ridge and descend a bit to the hut and the lake.

Tridentina
2. By Ferrata Tridentina. The other, more beautiful but also much more demanding route is Via Ferrata Brigata Tridentina. From the 1956 m parking place you take a traverse around Torre Brunico and then climb almost vertically around the 2494 m high Exner tower, cross a narrow gorge by a shaky, hanging bridge and reach the hut.

3. Through Val de Mezdi. You can hike from Colfuschg into Val de Mezdi and then in the lower part of the valley deter right (westwards) and ascend by the path No. 664 to the hut. 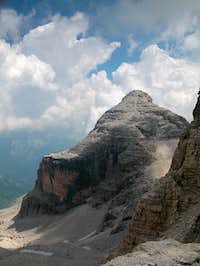 Gangolf Haub - From Sella di Pisciadu
4. From Lake Pisciadu. You take a marked path towards the south, ascend into Val de Tita (towards the SE) and then towards the north on Cima Pisciadu.

All paths are marked.

Summer and autumn months are preferrable - July to October. In early summer there are chances that on several places snow rests can be very dangerous, Especially in Val Setùs and in Val Tita (there, they are not so steep). So, in early summer Ferrata Tridentina is a better option, because it is certainly snow free, but think also of a return - it is unlikely that you will use that ferrata to get down.