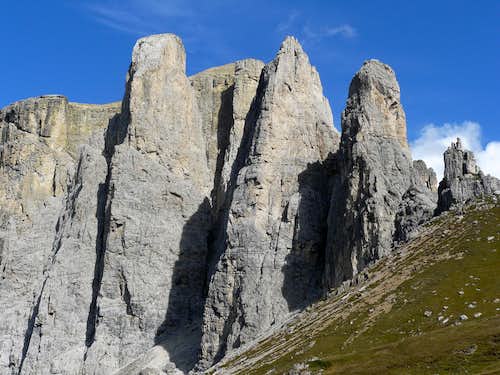 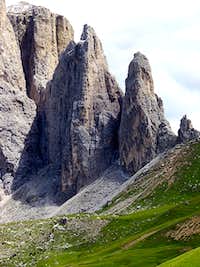 There are five distinctly separate Sella Towers. They are not named separately, but merely individualized by number roughly from south to north. They are the First, Second, Third, Fifth, and Fourth Sella Towers. The Fifth Tower is quite small and set back to the east between the Third and Fourth Towers. Most climbing interest is in the First, Second, and Third Towers with only four routes on the Fourth Tower and only one route on the Fifth Tower.

Sella Pass is located on the main road between Val Gardena and Val di Fassa. From the pass, it is less than an hour via good trail to any route on the First Sella Tower.There is bus service to and over the pass. A travel note: We were advised by a cousin with a summer place in the Dolomites and we have found it to be true, that having a car available in this area is far and away the best way to go - especially if climbing. This also greatly increases the choices of places to stay.

The climbing on the First Sella Tower is generally of the classic steep exposed variety expected in the Dolomites. Because of the ease of access and popularity of this area, many of the more frequented routes have polished sections, which can raise the difficulty of a climb by one full grade.Listed here are the normal route along with the classic and recommended routes on the Tower (arranged by difficulty).Normal Route, mostly I with places of II, 150 m, about one hour from the base. This is also the normal descent route. It attains the notch between the Tower and Piz Ciavazes via the south side, then follows steep broken ledges up the east side to the summit.Kostner Route, Southeast Face, III+, 180 m, This route has a spectacular open chimney near the top which separates the top of the south pillar from the face - see photos below.Glück Route (Pilastrini), South Pillar, IV+, 140 mSteger Route, West Ridge, V-, 180 m, (polished at the crux)Trenker Route South Face, V+ or V / A0, 180 m, (polished at the crux) There is a grading difference between my guidebook and the link provided, probably due to the polishing. This link also has excellent photos.Tissi Route, West Ridge, VI or VI- / A1, 180 mSchober Route, South Face, VII- or VI- / A1, 180 m

Climbing on the First Sella Tower

There is a CAI hut located nearly directly on Sella Pass. There are numerous vacation apartments, hotels, huts, and campsites in the general area within an easy drive of the Pass.