Sass Pordoi is easily one of the most visited mountains of the Dolomites. At 2952m not much is missing for the mountain to be a 3000er and a cable-car leads up from the road pass Passo Pordoi / Pordoijoch to its very summit. There is a restaurant up there and a lookout platform, famous for its views towards the Marmolada and Langkofel Groups. The cable-car is free hanging - there are no pillars on the 800m ascent! Sass Pordoi is one of the southern ramparts of the huge fortress of the Sella Group, together with Piz Chiavazes it goards the entry to Val Lasies the biggest valley of the group.

The mountain is directly connected to the Sella plateau - the desert-like karst moonscape which makes up a big percentage of the whole group. There are only two faces - one on the southern, one on the western side. Both are vertical, the western face rises for 800m out of Val Lasties while the south face is divided in two parts by the famous Sella ring-band, a giant ledge which surrounds the whole group.

Apart from the cable-car there are several worthwhile routes (see below for the climbing routes). The shortest one is a hike from Passo Pordoi to Forcella Pordoi (to the east of the mountain) and to its top. This route is far from difficult but strenuous by hiking standards. It is very brittle and a lot of scree covers the tracks. Also, it is a very steep ascent route. The second, much easier but also longer route starts in Passo Sella / Sellajoch and climbs the broad Val Lasties before heading back the eastern part of the Sella plateau to Sass Pordoi. This route takes a long day to complete both ways but is absolutely incredible due to the excellent changing views. This route is also often done as a ski tour in winter.

Sass Pordoi also - again thanks to the cable-car - is the trailhead for Piz Boè, the highest mountain of the Sella Group as well as the easiest Dolomites 3000er. In summer be prepared for ant processions from Sass Pordoi to Piz Boè with the short protected sections as choking points. 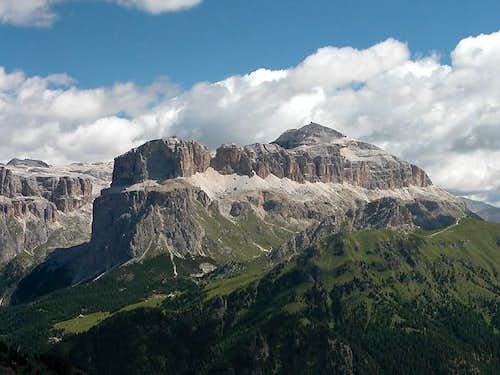 The Sella Group is located in the heart of the Dolomites and thus longish to get to. The shortest itineraries use the Brenner motorway A22. There are other routes (from Belluno or Brunicio / Bruneck) but I'll describe only the two shortest ones: