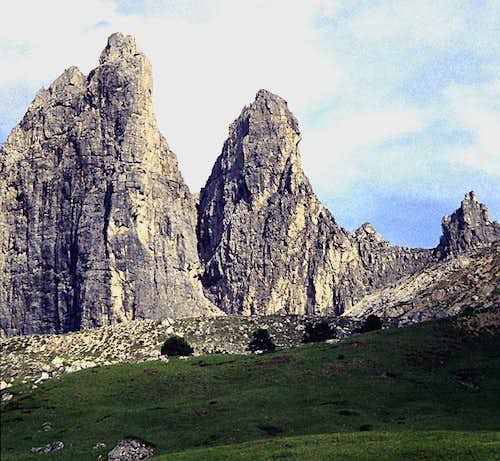 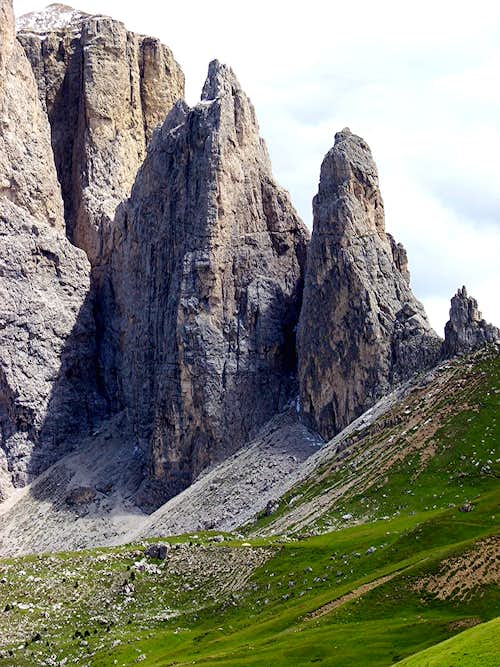 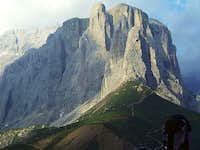 The Second Sella Tower is the second from the south, and second most accessible of the famous Sella Towers at Sella Pass in the Dolomites. The Second Sella Tower has a broad 250 m high north face and a sharp equally high northwest ridge or corner. There is a deep notch between the First Sella Tower and the Second, making its south face about 120 m high from the notch. The south face merges into the notch between the Tower and Piz Ciavazes. The southeastern side of the tower is a steep series of broken ledges leading to a final chimney, which leads to the summit.

There are over 13 routes on the Second Sella Tower providing a wide variety of excellent rock climbing in a beautiful mountain setting.

Otto Ampferer, Karl Berger, and Wilhelm Hammer made the first ascent of the Second Sella Tower on 9 August 1899 via the east side.

There are five distinctly separate Sella Towers. They are not named separately, but merely individualized by number roughly from south to north. They are the First, Second, Third, Fifth, and Fourth Sella Towers. The Fifth Tower is quite small and set back to the east between the Third and Fourth Towers. Most climbing interest is in the First, Second, and Third Towers with only four routes on the Fourth Tower and only one route on the Fifth Tower.

From the pass, it is less than an hour via good trail to any route on the First Sella Tower.

There is bus service to and over the pass.

A travel note: We were advised by a cousin with a summer place in the Dolomites and we have found it to be true, that having a car available in this area is far and away the best way to go - especially if climbing. This also greatly increases the choices of places to stay.

The climbing on the Second Sella Tower is generally of the classic steep exposed variety expected in the Dolomites. Two of the climbs on this tower are among the best of their grade in the area - the Kostner Dihedral and the Messner North Wall Direct.

Listed here are the normal route along with the classic and recommended routes on the Tower (arranged by difficulty).

Normal, Southeast Side and East Chimney, places of II, 220 m., about one and a half hours from the base. This route follows the normal route on the First Sella Tower to the notch between the towers and Piz Ciavazes, then climbs a chimney to the summit of the Second Tower.

Kostnerverschneidung (Kostner Dihedral), SW Face, III+, 120 m. Starts in the notch between the First and Second Towers and is approached via the normal route on the First Sella Tower. One of the finest routes of this grade in the area, very highly recommended. (see photos below)

Messner (North Wall Direct), VI-, 250 m. First climbed by the great Reinhold Messner with his brother Günther in August of 1968. The most popular route on the north wall.

There is a CAI hut and at least one hotel located nearly directly on Sella Pass.

There are numerous vacation apartments, hotels, huts, and campsites in the general area within an easy drive of the Pass.