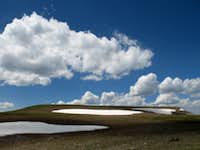 Austin Peak in the Absaroka Range.
The Continental Divide, sometimes referred to as "America's Backbone" or "America's Spine," runs from the Arctic Ocean all the way to the southern tip of South America. In the Lower 48 of the United States, the Great Divide is the geographical barrier between east and west; rainfall that runs west flows to the Pacific Ocean, and rainfall running east flows to the Atlantic.

The Great Divide is not only the geographical but also the wilderness heart of North America. Along its ridges and within its shadows lie the best and the largest habitats (in the Lower 48) for the great animals that epitomize the spirit of the American wilderness-- the elk, the grizzly bear, the moose, the wolverine, and, above all else, the wolf. Especially in Montana and Wyoming, the Divide runs through mountain country that still rebuffs mankind's attempts to tame it.

In Wyoming, the Continental Divide enters from in the northwestern corner of the state and crosses the southern portion of Yellowstone National Park. It then follows the Absaroka Range until its meeting with the Wind River Range around Union Pass, where it traces the crest of the Winds for almost 100 miles to the vicinity of South Pass, beyond which lies the Great Divide Basin. The Divide actually splits and encircles that region, coming back together near Rawlins (more on the Great Divide Basin in the next section). After that, the Divide winds through the Medicine Bow Mountains before it crosses into Colorado.

During its course through Wyoming, the Continental Divide passes through some of the wildest, most rugged, and most remote mountain country in the Lower 48.

There are all kinds of lists out there: continental highpoints, national highpoints, state highpoints, and county highpoints, to name a few. Surely, there must be some others besides myself who feel a pull to stand atop peaks that straddle the Continental Divide. This page is for those people.

It would be enormously time-consuming to list all the Wyoming peaks that are on the Continental Divide. Instead, this page lists (and provides links to) those Wyoming peaks that are on the Divide and also have pages here on SummitPost. The peaks are grouped by the three parent areas represented here on SP, and both the areas and the peaks themselves are listed in roughly north-south order, as one goes along the Divide.

Dark and brooding, the pinnacles and plateau-like summits of the Absaroka Range in Wyoming little resemble calendar-quality neighbors such as the Tetons and the Winds, but this sprawling, dramatic range is probably Wyoming's wildest and holds great appeal for mountaineers who seek rugged wilderness more than they do clean lines. In fact, most of the Absaroka Range makes for very poor technical climbing due to some of the worst rock to be found in the Rockies, but it is a fantasy come true for hikers and scramblers seeking solitude and a sense of the primeval world.

The Continental Divide only runs through a small portion of the Absaroka Range, entering south of Yellowstone National Park into the Teton Wilderness, which protects a section of the Absaroka Range sometimes called the Washakie Range. For around 50-60 miles, the Divide follows a southeasterly course before turning west to reach Togwotee Pass, crossed by U.S. 287 northwest of Dubois. During that run through the wilderness, the Divide often serves as the boundary between the Teton and Washakie Wilderness Areas.

Although some of this country is considered as remote as it gets in the Lower 48, the Divide is accessible for day hikers and climbers in the Brooks Lake/Togwotee Pass area. The Absaroka peaks listed on this page are, in fact, day climbs. South of Togwotee Pass, the range and the Divide continue to Union Pass, considered the northern terminus of the Wind River Range.

SP page for the Absaroka Range

Brooks Lake Cliffs (Absaroka Range)-- Here, the Divide is a long wall of sheer breccia cliffs. Mount Sublette is the peak at the left end of the formation. 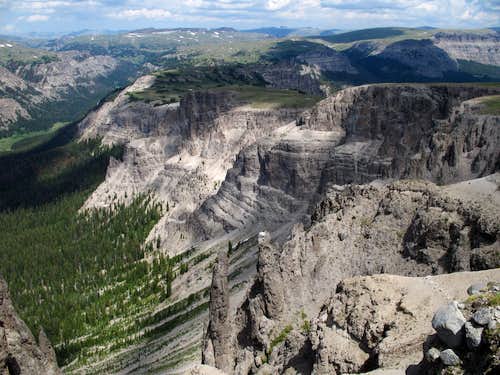 Arguably the greatest alpine range in the American Rockies and even in all of the Lower 48, the Winds have the largest glaciers in the American Rockies and the greatest concentrations of them. The peaks of Titcomb Basin and the Cirque of the Towers attract climbers from all over the world, and those areas can be crowded, but the range is so vast that it is easy to find solitude among the high peaks. Gannett Peak, Wyoming's highpoint and one of America's signature peaks, rises in the glaciated heart of the range, and the range itself is the highest in the Rockies, American and Canadian, north of Colorado.

No roads, paved or unpaved, cross the Winds, and three federally designated wilderness areas, plus a large roadless area administered by the Wind River Indian Reservation, protect this range from the encroachment of mechanized civilization. Although a few notable peaks can be climbed car to peak and back in just a day, it typically takes at least one or two days to reach the peaks of the Divide (but some tough mountaineers have managed to climb Gannett and other major peaks in epic one-day outings).

Although the highly popular areas of the range are known for their challenging technical routes, there are many fine destinations that are scrambles or walk-ups. Gannett Peak itself is not considered technically difficult by its standard route, but conditions can change that, and the mountain, big and remote and demanding, should never be taken lightly. 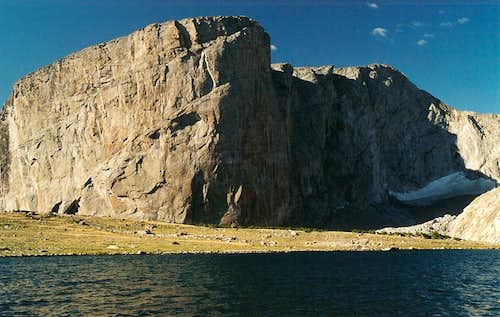 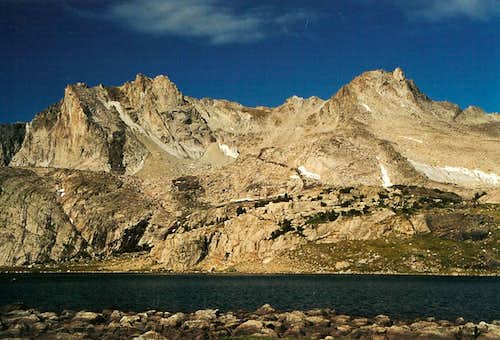 Baptiste Lake and the Divide (Wind River Range)-- This high, windswept tarn at the border of the Popo Agie Wilderness and the Wind River Indian Reservation is one of the alpine jewels of the southern Winds.

Between North Oregon Butte (in the vicinity of South Pass) and Bridger Pass (near Rawlins) in Wyoming, the Continental Divide does a strange thing-- it splits and forms a ring around a vast desert-like area called the Great Divide Basin. In fact, it is considered a cold desert (like the Great Basin), and it is one of the largest such tracts in North America remaining essentially undeveloped. At over 7000’ in elevation throughout much of it, the region sees winters that are cold and long but summers that are hot and dry. A day here without almost-constant wind is like a summer day in the South bereft of stifling humidity—not likely.

From within the Great Divide Basin, there is no outlet to either the Atlantic or the Pacific Ocean; water that flows here, and even that is rare and brief, evaporates or gets swallowed up by the thirsty earth. When streams do run, the water is alkaline-- this is no place into which one should venture without a good supply of water.

The peaks here are much lower than they are to the north and, compared to the Absarokas and the Winds, may not even seem like real mountains, but do not dismiss them, especially if you like desert peaks and the empty, open country they often inhabit. The mountains of the Great Divide Basin consist of sagebrush-covered buttes, badlands-like peaks, and old volcanic plugs, and although they are not spectacular in the way that the Absarokas and the Winds are, they are also spectacular in ways that those ranges are not. Most peakbagging out here will be by hiking with some occasional scrambling thrown in. Technical climbing, in the few places where it might seem possible (like the sheer cliffs found on the Oregon Buttes), is probably a bad idea because of the soft, unstable rock that typifies many of the mountains out here. 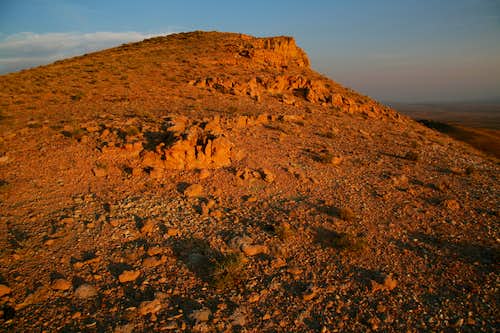 Continental Peak (Great Divide Basin). Gone are the glaciers, tarns, and alpine meadows of the Absarokas and the Winds, but the vast wilderness remains, and new wonders await. 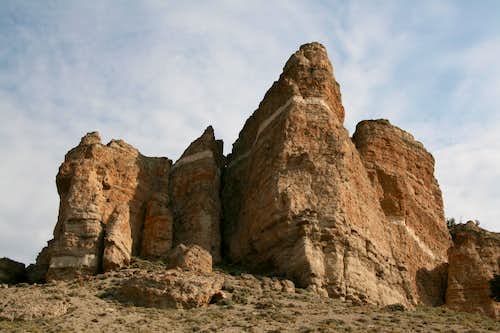