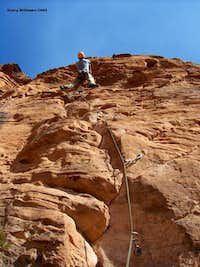 Arachnaphobia, 5.10a
Although we had scouted Cougar Cliffs early during our climbing stints to Southwest Utah, it was one of the last crags we actually climbed at in the St. George area. And for good reason. Where nearby Black Rocks offers some of the hardest rock in the area, Cougar Cliffs offer some of the softest. It is debatable how many folks would have bolted these routes, but Goss and company have bolted many a crag, not all involving the best rock. 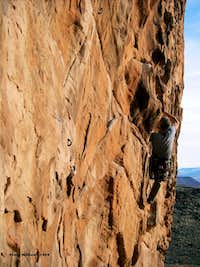 Petting the Pussycat, 5.10b 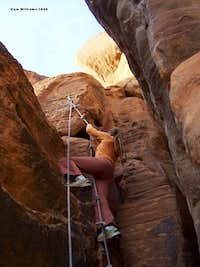 Cougar Cliffs offers surreal views on the rim of Paradise Canyon. Many of the views frame beautiful desert and mountain landscape without a building in site, yet in reality you are only six miles north of Saint George. Ron Olevsky put the first route up in 1993, Pearls Before Swine which was supposedly a commentary on the quality of the rock at Cougar Cliffs. Todd along with others developed the main cliff.

Although Cougar Cliffs is located within the Red Cliffs Desert Reserve, a 62,000+ acre scenic wildlife reserve set aside in 1996 to protect the desert tortoise among other sensitive desert species, the crag is actually managed by Snow Canyon State Park. Red Cliffs Desert Reserve is the cornerstone of three separate and distinct ecosystems, the Mojave Desert, the Great Basin, and the Colorado Plateau. Due to this unique merge, several endemic species, those which can be found no where else in the world, are found in the reserve. Please keep your dog on a leash, as is required by Snow Canyon State Park, particularly if they are prone to digging or pestering these creatures. Desert tortoises can actually die of dehydration if they are harassed.

Outside of Zen Wall, Cougar Cliffs could be the warmest spot to climb during winter afternoons in Saint George. Approximately 15 routes are located throughout the Cougar Cliffs area with the better ones (7) congregated on the longest cliff wall which faces southwest.

You can actually hike to Black Rocks from Cougar Cliffs. Neither offer the serious trad opportunities that can be found at Bluff Street Crags back in town nor the multi-pitch routes in Snow Canyon State Park. 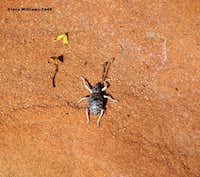 Across from Main Cliff


(photos) Petting the pussycat at Cougar Cliffs, get it? The longest route at 90’, this is one of the more enjoyable routes for the grade near Saint George. Both of us were pumped from other routes, but neither I nor another partner, who is a strong 5.11 leader, could lead this route clean the first time. So consider it a tough 5.10b. You might want to get on it early during your outing, it is pumpy. Pussycat is a very sustained, but well protected, route. Positive holds galore, but the moves are just slightly overhanging most of the way. Overhanging start up a crack that could be protected for this climb in my opinion, but has obviously been bolted. After a move right, fun move back into the crack with your left leg to get this route started. Eight bolts take you to chains (80’), but you can continue another 10’ to the top of the cliff and another anchor.


Next Cliff East
(photos) This cliff is comprised of nasty soft rock. There is a project out to the right, not worth completing. I do not recommend this route, even as a warm up. But if you must, as I did…..tough start (real tough for a 5.10a due to sandy foot traction) reaching high right, but constantly returning left following a discontinuous crack up to a scoop. Easy going after that, but pulling on suspect jugs via overhanging moves to pull out of the scoop and head for the chains can test your courage. Five bolts.

Outlier Cliff to the Northwest

Drive north on Bluff Street (Route 18) beyond St. George proper, six miles north of Sunset Blvd. Use a turnout on the left side of the road just beyond a major dip at mile marker 6. Walk through the fence and turn left heading for the “Dome”. The tall cliff where the real routes are is accessed vial several knotted ropes hanging from bolts (2008). Pass to the right of the dome and scramble up and right looking for a narrow descent. Descend into the narrow passage and turn right looking for the top of the first rope assist. Once down to the bottom of this rope, turn left and descend another rope. Most routes are accessed from this point. Or you can continue down one more rope for the 5.10a route on the next cliff east.

Black Rocks is closed March 15-June 30, but to my knowledge, Cougar Cliffs is not. Black Rocks and Cougar Cliffs are currently closed to new development and/or new routes must be applied for through Snow Canyon State Park. Parking is allowed in designated areas only. Overnight parking for backcountry camping, hunting, or shuttling is permitted. No camping is permitted in the parking areas. All pets must be on a leash to prevent wildlife disturbance and to avoid conflicts with other people. In the Lowland Zone, campfires are restricted to established fire rings within official campgrounds. Campfires are allowed in the Upland Zone, but may be subject to closures for high fire danger.

The rock at Cougar Cliffs is some of the softest in or around Saint George. As with most any climbing on sandstone you should avoid climbing for at least 24 hours after any rain.

My favorite place for dinner is the sushi bar at Benja's Thai & Sushi, 2 W. St. George Blvd. The best breakfast and coffee can be had at Jazzy Java, 285 North Bluff Street. The Outdoor Outlet is one of my favorite independent climbing stores anywhere. They know the climbing area well and have a great selection of gear at competitive prices. Ask fo