Dow leading Atman, 5.10b
Just to the southwest of Green Valley Gap is one of my favorite St. George crags, if not for the diversity in routes and rock, then for the isolation and views. The Zen Wall is comprised of sandstone cliffs (some of which are heavily varnished) that hang out over a mesa on the west side of St. George, thus receiving western exposure in the afternoon. Therefore it is a better winter crag than summer one, although the morning hours will offer significant shade. The Zen Wall routes are quite a bit taller and more interesting than the Green Valley Gap routes on average. Dow leading Drinking the Ocean, 5.10d
As close as Zen Wall is to town, it is actually not that easy to find. As the crow flies from Green Valley Gap, it is but a short distance. But several deep rooted canyons can make it quite a trip if you don’t know where you are going, even easy to get lost. The only interruption to peace and tranquility on this isolated cliff band will be a few bikers on weekends on the Green Valley mountain bike loop below.

There are just under 40 sport routes on Zen Wall. Todd Perkins started the development of Zen Wall, thus the grades are much more true when compared to any of the "boltmeisters" (Goss) routes throughout St. George. Most of Goss' routes are way soft in grade (to impress his spa tourist clientele no doubt). Another of many great local crags near St. George proper.... Black Rocks, Chuckawalla Wall, etc. 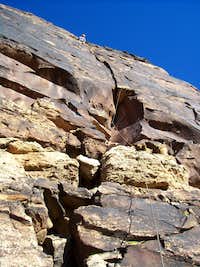 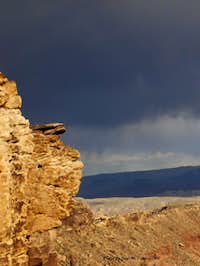 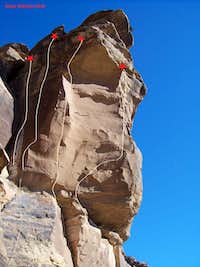 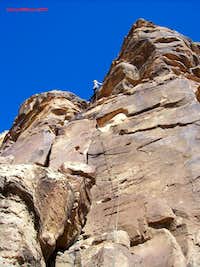 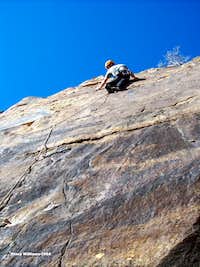 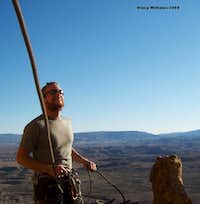 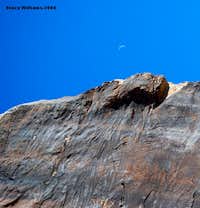 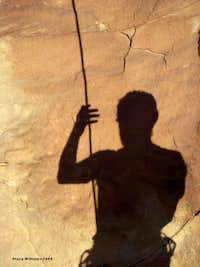 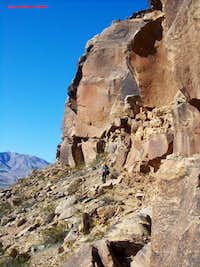 A trad roof crack at the far south reaches of Zen Wall. The rock at this end has some conglomerate in it and is not near as trustworthy as it is further north at the crag. The crack is bomber, but the face stuff is suspect on this route. Exceptional fun roof problem. You need a shoulder length sling at least to place on a 2" cam or you can place a 3" cam further out.  You should still extend below the roof to avoid rope drag.  Once you make some awkward stem/chimney move at the grade to the wide crack above and pull the roof, the route eases way off.  Once you are into the crack above (medium to large gear), the climbing is much easier, but again, on suspect rock when outside the crack. The crack is fairly wide, some arm barring. Someone removed one of the rappel hangers so continue above and left to the anchor of Karmic Justice.

Great route with a crux move at the grade after the 2nd or 3rd bolt.  The very slight edges on a steep slick wall, will test your foot work.  Above there the route eases way off to some fun but crimpy moves. Eight bolts to anchor.


Real tame 5.10a lead, really only one grade move at the top over the small roof. Kind of dirty, we pulled a few loose pieces off despite the varnish look. My friends thought it was great though, so might be worth doing. Shares an anchor with Running to a Standstill. Just about all of your draws are placed with your left hand. Seven bolts to anchor. Not far from the ladder from here if you are done for the day. (photos)

Ascend a flake to the crux then easier grade crimps to the same anchor as the Emptiness. Real nice varnished wall.

These bolts are not placed for maximum safety.  Start directly under the arete vs traversing in from the right.  After the first two bolts, you have a run out exposed crux move to reach the 3rd bolt. It is a bounce move to a finger ledge. Goss puts a bolt down low and right that serves no purpose and then not a bolt where it needs to be to protect a decking situation. His bolting skills and ethics have always been a bit off.


The best route period at Zen. Combined with Scattered Marbles, your best stop. A juggy 5.12! The crux is low with a tough side-pull, then the pitch opens up to dyno type jugging. The overhanging roof is pulled on huge jugs as well. A must do.

Could be the best route for the grade at Zen Wall. A must. A nice long sustained route at 70' giving up just about everything in one pitch. Some jamming, overhang, edges and a funky mantle move towards the end. After that mantle move it looks blank, but is easier once you find the edges. Steep ground to the chains above. Be careful about your decking opportunities on the pillar to the left. Seven bolts to chains according to the guide book, but seemed like more than that via my memory. (photos)

Fantastic route for the grade up an arete up the hill a ways. You can cheat to the right, but stay on the arete, the moves are there. You do swing out left at one point. Really hard well varnished rock. Six bolts to top rope anchor.

Tough jump move.   Do a wide stem between the walls, after about the 3rd or 4th bolt, do a full body stem to reach a jug on the bolted wall.  Let go of your feed and avoid stubbing your toes as your lower body slams a bit into the bolted wall.  Make the crux move (full on at the grade I thought) to clip the next bolt.  A right heel hook, left hand palm mantel to slopers.

A real confidence builder for the grade. Fun counter balance moves from bottom to top. Suppose crux would be gaining the 2nd tier above, one move there to easy varnish or the steep slab to start. Nine bolts through 80'. (photo)


Very nice spliter crack up some of that blank Zen wall slab. Could be protected from bottom to top, but someone has bolted a line just to the right of the splitter. (photos)


A short route for Zen Wall, right next to one of the access points. But this is an excellent sustained route at 5.10a on really sound varnish. Fun slab and edges through five bolts (not six as stated in Todd's guide book) to anchor. Worth scrambling up from the lower trail and doing. (photos)


Real fun slab route on dark varnish past six bolts (70’) to chains. Crux is early via a couple of sparse slab maneuvers, then it eases up no worries. On the easy side of 5.10c I thought. (photos)

Appropriately named. I advise staying off of this route, because obviously the raptors use and enjoy this perch. Guess I was not paying attention to names when I did it. It is easy for the grade. Only one 5.10 crimpy move towards the top as you get into the “doo” part. All fairly positive, albeit sandy pockets and holds. Six bolts through 60’ to chains. (photos)


Slightly easy for a sport 5.8. Real positive varnish. Start up and move right below sandy overhang. Gain its arête and attack the heavily varnished face directly above through six bolts (60’) to anchor.

Challenging move in the middle of this 5.10d. Side pull a time or two, then get both toes facing south and go for a very tall reach as you work them up tiny edges. Five bolts through 50'.

Tough crimping on the solid black greasy type of varnish. Crux is very blank between the 3rd and 4th bolt. Reach for crimp on the left that is somewhat polished. Not suppose to use the crack to the right. Five bolts through 50'.

You can access the Green Valley Gap area and Zen Wall from the northeast or southeast, depending on which way is shortest for you to circumvent the huge bluff that the St. George Airport sits on. Either way, your target is Dixie Drive which runs north south on the west side of the bluff. Turn west off of Dixie Drive for the Green Valley Spa, which is considered by Travel and Leisure Magazine as one of the top three spas in the world, so it is not so hard to miss. Pass the spa on the left and continue until the pavement hits a dead end. Continue on the dirt road and turn right following the tracks for a short period and turn left down a steep hill and follow a dirt road due west. Turn left at the bottom of the hill through an opening in the fence (2007) and continue across a wash (4wd and/or high clearance vehicle) and follow the faint road as it turns west again. Drive to the end of this faint road (several miles of slow going). Once you exit the car, continue west on foot trying to pick up a faint trail that runs along the edge of the mesa as it curves back south. There are several access points that descend to the base of Zen Wall including a chimney about half way along. Look for cairns.

By far the best way to experience Zen Wall is very simple. Go all the way to the south end before you descend the cliff (the metal ladder). Climb your way back to the north end where you can scramble back to the top of the mesa and return to the hiking trail. There is no cairn showing you where to scramble back up. But an easy line is past all the bolted routes at the turn of the cliff back east, a left to right ramp.

The rock at the Zen Wall and Green Valley Gap is not as solid as Black Rocks, but stronger than Snow Canyon. As with most of the climbing in and around St. George, you should avoid climbing for at least 24 hours after any rain. You are close if not within the city limits of St. George and there are no permits to climb or park. Access issues could become more complex as this area is slated for future development.