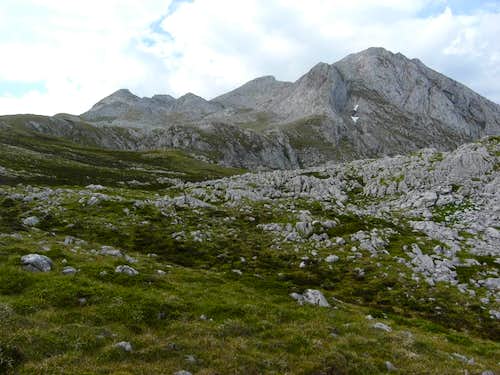 The first summit within the Pico Valdominguero north ridge, coming from Jito Escarandi, which surmounts 2000 meters is the rock ridge of Cueto Teyau.

For a first look Cueto Teyau may be only a secondary summit within this ridge but nevertheless it seems to be visited quite often and even disposes of a summit buzon. Its easy and short ascent from Jito Escarandi, the short detour from a visit to Pico Valdominguero and the good views to the Macizo Los Urielles peaks makes an ascent worthwhile.

Cueto Teyau shows an impressive west face, about 1.200 meters above the Duje valley. The prominence to the southern col, leading to the Picas del Hou Sin Tierre, the southern neighbouring peaks, is, however, less than 50 m. Cueto Teyau clearly dominates its northern neighbor, Pico Boru, with more than 200 m of altitude difference. 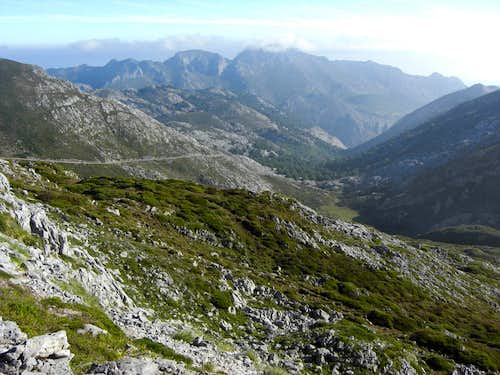 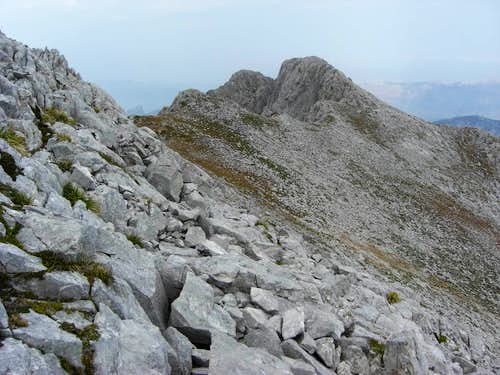 Use the north ridge route of Pico Valdominguero from Jito Escarandi or from Sotres, pass by Pico Boru and ascend to a nameless little Jou east of Cueto Teyau and the Picas del Hou Sin Tierre.

There is a cairned trail starting at your right and ascending steeply the east slopes of Cueto Teyau (cairns) until you reach the south ridge to the Cueto. Follow the cairns on the south ridge (easy rock scramble) to the summit buzon.

The traverse from the Picas del Hou Sin Tierre main summit (that is the northernmost peak of this bunch of summits) is easy and short; just follow the narrow trail on the Picas north ridge to the south ridge of Cueto Teyau.

There seems to be a direct route from Caseton de Andara to the Jou Sin Tierre and to the north / east ascent to Cueto teyau but I did not explore that possible ascent. My guess is that you have to go to Collado de la Aldea, use the old mine road straight on to the ex Lago de Andara, now dried out due to the mining activities, and ascend to Collada del Medio between the minor summits of Cuetu de la Ramazosa and Cuetu de la Cueva. Then you enter the valley northeast of Pico Soriano and follow up that valley to a chute, leading up to Jou Sin Tierre.
Climb the Picas del Jou Sin Tierre and traverse to Cueto teyau or descend from the Jou Sin Tierre to the lower little Jou and take the direct trail/route up to Cueto Teyau.

Cueto Teyau is part of the Parque National de los Picos de Europa.
The entrance to the national park is free, you need no permits. 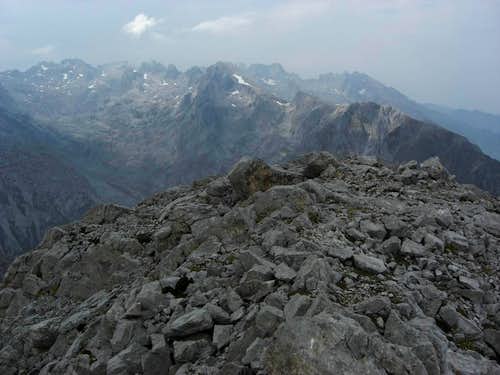 Cueto Teyau is a year round summit, good for hiking in spring, summer and autumn.
As the slopes of the north ridge route are not too steep ski touring and snow shoeing should be possible.

You need normal hiking gear for a summer and autumn tour on Cueto Teyau.
Gaiters and hiking poles may be useful in springtime. 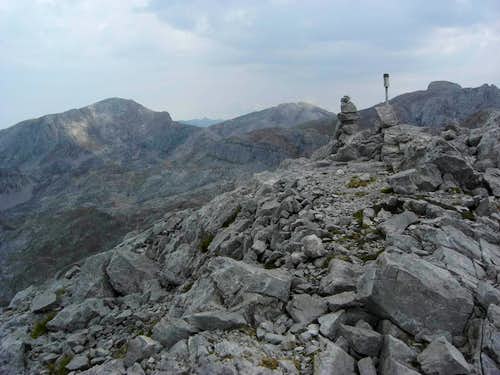