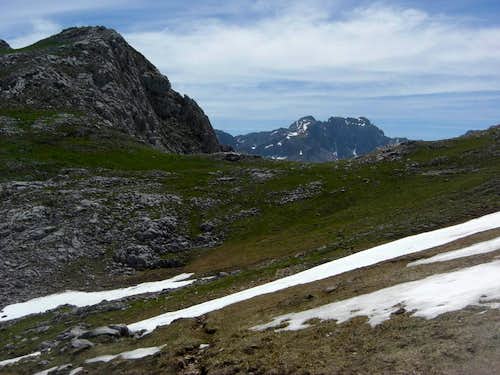 The highest peaks and summits of Macizo de Andara are close together and located around the culmination point of the range: Morra di Lechugales.

From this summit a ridge stretches to the north where the Jierro peaks are located close to Morra di Lechugales.

Pica del Jierro is the meeting point of the two main ridges of Andara massif: the east – west main ridge and the south north main ridge.
To the north there is Collau Valdominguero, some 300 m lower than the Pica. The north ridge from the Collau has beautiful meadows in its lower part, the so called Campos de Valdominguero.
To the east is located Pico del Grajal de Arriba, about 80 m lower than Pica del Jierro. To the south a col, some 50 m lower, separates the Pica from the Picos del Jierro. The west face of Pica del Jierro drops down about 1300 m to the Duje valley.

The Picos del Jierro ridge borders the Hoyo del Evangelista, a huge sinkhole, to the west. The highest point of this ridge is stated with 2432 m in the Adrados map, thus marking the Picos del Jierro as third highest mountain of Macizo de Andara. As the Picos and the Pica are located close to Morra di Lechugales and Silla del Caballo Cimero, all four summits can be visited together in one day trip.

Pica del Jierro is a distinct mountain and may get visits for its own. The Picos del Jierro don´t have this prominence, this makes them, perhaps, less frequented.

But both summits offer excellent views, especially down to Duje valley and to the peaks of the Macizo Los Urielles. On clear days even the town of Santander can be spotted in the far northeast. 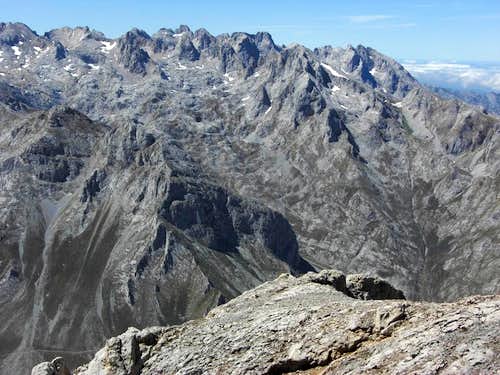 Invernales del Texu can be reached by leaving the CA-1 at the first switchback about 1 km before reaching Sotres. Follow the dirt road for a while and park your car above the Invernales.

For Tanarrio, Lon or Brez follow road number CA-185 from Potes in the direction of Espinama / Fuente De. 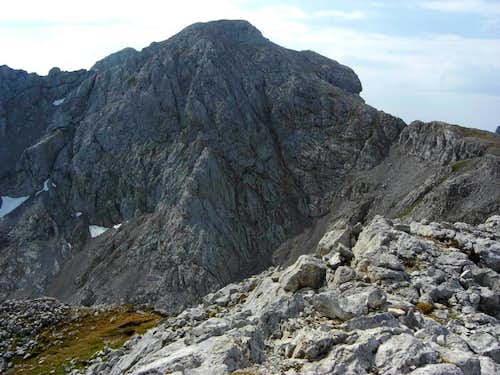 Pass by the Caseton at a broad road switchback on a trail west of the hut and regain the mine road above or go to the hut and follow the mine road. Above the route junction stay left and follow the steep road up to the Minas de la Providencia.
Instead of entering the huge Vega del Hoyo Oscuro stay right and ascend to Castillo del Grajal on a mine road. Follow that road up to Collado del Mojon and descend on that road into the upper parts of Canal de las Arredondas south of the Collado. A swithback brings you in western direction – pass the south slopes of Pico del Grajal de Abajo and regain the ridge at the col west of the Abajo peak.

Follow this road/trail in western direction. First the ridge is steep, narrow and rocky. After a while you enter a gentle meadow slope. Follow the mine road until its enters the Hoyo del Evangelista. Leave the road there and ascend the meadow slope on a narrow and marked trail to the summit of Pico del Grajal de Arriba. From there follow the cairns on the ridge crest or a bit south of it until the trail starts to ascend the east ridge of Pica del Jierro.

There are several possibilities now: 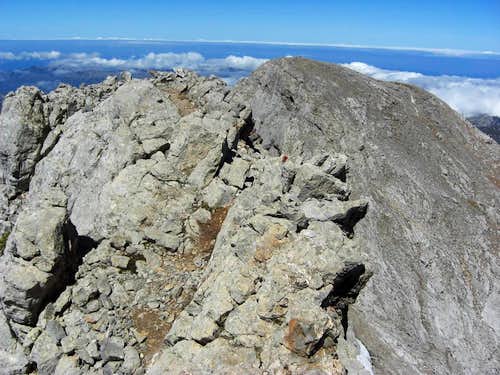 Pass by the Caseton at a broad road switchback on a trail west of the hut and regain the mine road above or go to the hut and follow the mine road. Above the route junction stay right at the next switchback and follow that mine road shortly until you arrive at the Collado de la Aldea. Take the road branching off to your left and follow that road up to Minas de Mazarasa and further on to the north slopes of the two Grajales south of Valle de Andara. These parts are called Traviesas del Grajal de Abajo and de Arriba. The trail ends at Collado Valdominguero.

A cairned route guides you up the meadows of Campos de Valdominguero south of the Collado, which are the lower part of the Pica del Jierro north ridge. The meadows end at point 2286 m of the Adrados map where the north ridge of Pica del Jierro gets narrow and rocky. Follow the ridge crest until the ridge drops down to a narrow and steep notch; climb down these rocks ending in a narrow rock chimney some steps above the notch. There is a short UIAA grade II move to get down in that chimney.

From the notch ascend the steep rocks first left of the ridge crest than near the ridge crest up to the scree slopes of the upper north ridge. Ascend these steep scree slopes – there is some easy rock scrambling, too – on a narrow foot track until you reach the summit of Pica del Jierro.

Use the south ridge of Pica del Jierro to traverse to the Picos del Jierro. Use the east ridge to gain the route via Pico del Grajal de Arriba and Collado del Mojon.

If you use this route as a descent route, pay attention at the lower end of the scree slopes: You first follow a rocky part of the ridge crest (easy rock scramble). When you arrive at some steep chutes dropping down to Jou Lleroso you have to follow a red arrow (!!), painted on a rock, wich leads you to the above mentioned notch. Don´t miss that, otherwise you end up in nasty terrain!
From the notch there is a scree and rock chute down to Jou Lleroso with many foot tracks. You can shortcut the Campos de Valdominguero by following that chute. I found it much more entertaining ( and better for my knees!!) to descend the Campos to the Collado Valdominguero. 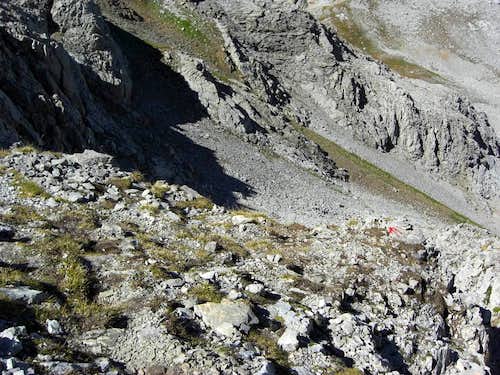 Leave the road there and start ascending the Canalon. There is a narrow trail first up to the ruins of Majada de Jidiello, cairned, partly marked with green dots and even leading further up the Canalon. Then the trail gets even more narrow and you have to find your way up until you reach the small and steep rock chute below the meadows of Collau Valdominguero. There is a short rock scramble up the chute.

From the Collau follow the route via Pica del Jierro north ridge, as described above.

Trailhead: villages of Lon or Brez

Follow the road from both villages in northern direction to Prao La Mayor, where these roads meet.
Ascend now the long Canal de las Arredondas to the mine road below Collado del Mojon (long ascent!)
At the mine road turn left and follow the route via Pico del Grajal de Arriba to Pica and Picos de Jierro.

Take the road north of Tanarrio, branching off to the left from the road to Brez.
Take the left hand road at a road junction about 1,3 km later. This road terminates at the end of the long Canal de Lechugales.
Ascend the Canal until you reach the col between Picos del Jierro and Silla del Caballo Cimero. Turn left and scramble in western direction until you reach the trail between Picos del Jierro and Pica del Jierro.

The route is steep, long and at least partly off-trail. 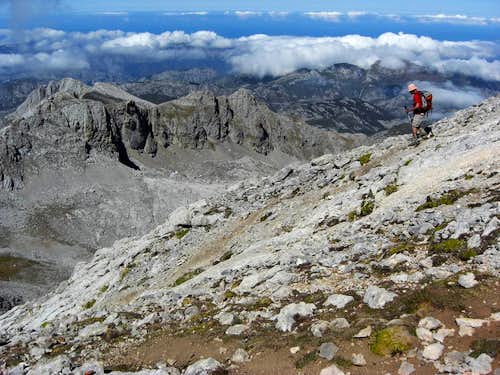 Picos and Pica del Jierro can be summited with skies, too. For the last rock parts you may need crampons and an ice axe.

The Canales de las Arredondas and de Lechugales are ski routes, too. As the Canal de Lechugales is very steep it seems to be a preferred downhill area.

A very, very long and strong day or a two days undertaking with a night at Caseton de Andara.

The Grajales are part of the Parque National de los Picos de Europa.
The entrance to the national park is free, you need no permits. 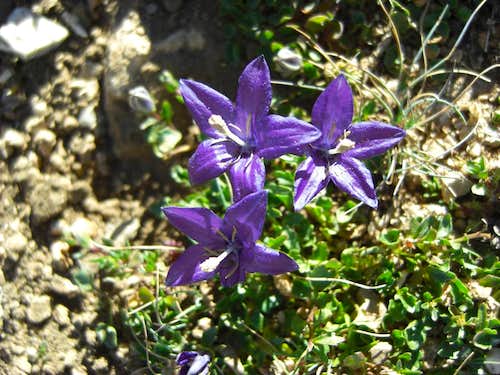 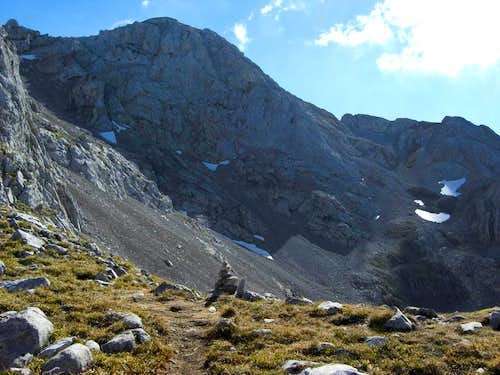 Pica and Picos del Jierro are mainly a spring, summer and autumn outing.

As the route Caseton de Andara - Collado del Mojon and the Canal de las Arredondas is one of the main ski routes within Macizo de Andara, the Picos and Pica del Jierro are a ski tour summit aim.

Canal de Lechugales, too, is used as a ski route.

You need normal hiking gear for a summer and autumn tour on the Jierro summits. Gaiters and hiking poles may be useful in springtime.

The traverse of the Picos del Jierro require some scrambling aibilities, the last part of the ascent routes are very steep and a bit exposed. On the northern route to Pica del Jierro there is a short UIAA grade II move at the top of the Campos de Valdominguero where the rock drops down into the sharp notch within the north ridge. 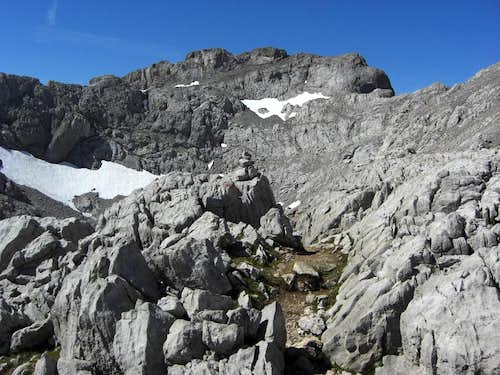