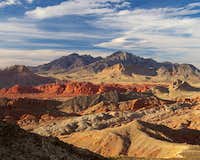 Muddy Peak
The Desert Peaks Section Peaks List consists of peaks compiled by the Desert Peaks Section of the Angeles Chapter of the Sierra Club in order to promote interest in the scenic desert ranges of the Southwest. The DPS is the oldest peak climbing section of the Sierra Club, formed by Chester Versteeg informally in 1941, and later officially in 1945. The original 1941 list contained seven peaks and remained unchanged until 1947. The list has since grown over the years until reaching its current state of 99 peaks, the latest addition being Muddy Peak in 2003. Of the 99 current peaks, two thirds are located in the deserts of California, with the rest located across Nevada, Arizona, southern Utah, and northwestern Mexico.

The original seven peaks on the DPS Peaks List were New York Butte (Chester Versteeg’s first desert peak), White Mountain Peak, Waucoba Mountain, Telescope Peak, Cerro Gordo Peak (removed and replaced with Pleasant Point in 1952), Coso Peak (removed for one year in 1947, for five years in 1956, and again permanently in 1973 due to difficult access within China Lake Naval Weapons Center), and Maturango Peak (also removed for one year in 1947 and for five years in 1956, though it remains on the list since 1961).

Seven of the current peaks have been designated as Emblem Peaks (Montgomery Peak, Mount Inyo, Telescope Peak, Rabbit Peak, Charleston Peak, Signal Peak, and Picacho del Diablo). Each Emblem Peak is identified in the table below with all caps.  Coincidentally, one of the peaks on this list was the very first mountain ever represented on Summitpost with an informational page and that is Baboquivari Peak.

The official DPS list publication is available here, and Peakbagger.com provides a useful list page including a map and prominence information. 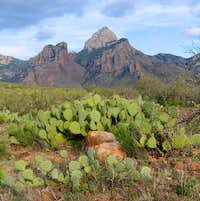 Baboquivari Peak
The data in this list is based on USGS Topographic Maps, Summitpost Pages, and these links:

Peakbagger page on the DPS by Greg Slayden

Climber.org page on the DPS including GPS files