Mummy Mountain is the 2nd highest peak in southern Nevada.

The mountain is also the 2nd highest mountain in the Spring Mountains, a beautiful and varied range comprised of the fabulous sandstone peaks of Red Rock NCA, as well as the glorious high limestone peaks found further north in the range. From its southern tip near Mt. Potosi (site of the Carol Lombard plane crash) to its northern tip at Mt. Stirling (for you conspiracy theorists, one of the only remaining public viewpoints into Papoose Lake), the range squeezes an unlimited amount of outdoor recreation into a 70 mile stretch of fascinating topography. In addition to the class 1-5+++ climbing to be found in the Red Rock area, the limestone portion of the range offers 10 peaks above 10,000 feet, which, in the winter time, transform the area into a beautiful snowy playground with a very alpine feel.

Mummy is one of the northern Spring Mountains' showpieces.

When viewed from Las Vegas, Mummy Mountain is often mistaken for Mt. Charleston. While traveling north on highway 95 from Las Vegas, near the Lee Canyon turn-off to the Spring Mountains, the gigantic massif of Mummy presents itself boldly and strongly resembles, well, a Mummy. At the southern end of the mountain's 1/2 mile long summit plateau is the Mummy's pronounced toe, at the north end is his over sized forehead, and in the middle, you guessed it, is his swollen "tummy". At 11,528 feet, this "tummy" is the highpoint of the mountain. Scattered about on the huge timberline summit plateau are some nice groves of ancient bristlecone pines.

On Mummy's flanks lie two springs, Mummy Spring on the east side and Cave Spring on the west. Near the mummy's toe, you may come across the "Raintree", a huge 3000 year old bristlecone pine. Only a short jaunt to the south from the "Raintree" is the summit of Fletcher Peak, at 10,319 feet, southern Nevada's 6th highest peak.

Lying only a few miles east of Mt. Charleston, Mummy is 2nd to Charleston in two categories that draw the crowds away from its shores - height and trails. Though only a few hundred feet shorter than Mt. Charleston, Mummy Mountain does not have a summit trail of her own. Although many routes can be traced from various locations in Kyle and Lee canyons to the various points of interest on the Mummy summit massif, the most common, by far, is the route to the aforementioned "tummy". The "tummy" route is described in the route section of the page. 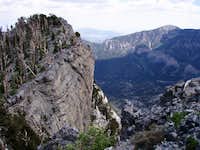 If seeking the summit of Mummy Mountain, from Las Vegas, take highway 95 (north) to the Kyle Canyon turn-off (highway 157). Turn left (northwest) and follow the road for maybe 10-12 miles into the small community of Mt. Charleston. En route, you will pass through the desert scrub lands of the lower part of Kyle Canyon, into the Joshua tree lands of the middle section (be sure to check out the La Madre Mountain scar to the south), then into the pinon/juniper woodlands of the upper middle portion, and ultimately to the ponderosa forests of the upper canyon. Once into the community, you will pass the Kyle Canyon Ranger Station on the left, some homes, a school, a library, and then further, a fire station on the right. Just past the fire station, where the main road starts to bend to the left, a smaller road branches off straight ahead. Follow the smaller road. From there, travel another half mile or so as the road bends to the right, and just before it bends again at a sharp right in the road and starts ascending steeply, you will see a USFS sign and some parking spaces on the left. Park there. This is the Trail Canyon trailhead. (Note: About halfway along this smaller road, just as it first bends to the right, a dirt road feeds off to the left. From this road, you can access Mary Jane Falls, Big Falls, Little Falls, and what some argue is evidence of past glacial activity in the Spring Mountains - an apparent moraine).

No permits, fees or passes are required to park or to climb the mountain.

The mountain is open and accessible year round.

Much of the mountain is comprised of wilderness, so please, respect the land.

Although generally climbed in the summer and fall months, Mummy Mountain can be climbed any time of year. During snow months, snowshoes and/or crampons and ice axe are generally needed. Avalanche awareness is also a crucial part of the Mummy winter experience, as a portion of the standard "tummy" route entails ascending (and descending) an avalanche slope.

Backcountry camping is allowed without a permit and without cost. Obviously, practice minimum impact camping and travel.

Fires are not allowed, and the collection of bristlecone wood is prohibited.

There are many developed campgrounds in the Mt. Charleston area. For more information on doing it "the easy way", contact the USFS number below.

I am not aware of any webcams in the Mt. Charleston area, but if you want an idea of what current conditions are like, try contacting the USFS at 702-515-5400.

As is typical with the higher mountains, expect frequent afternoon thunderstorms in the summer. Also, expect snow from around mid-October until early June. 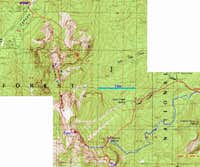 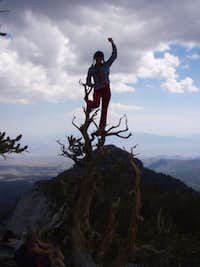