Sitting precariously between two rugged 13ers in the Indian Peaks Wilderness live an unusual rocky pinnacle named Dicker's Peck. Although I am unsure of the origination of the name, I would guess it was named by Colorado climber/guidebook author Gerry Roach. This humorous rock makes up for it's short stature and lack of prominence with a sporty climb and lofty summit. It's summit makes a fine addition to a climb of either Apache or Navajo Peaks and especially after an ascent of the Navajo Glacier. 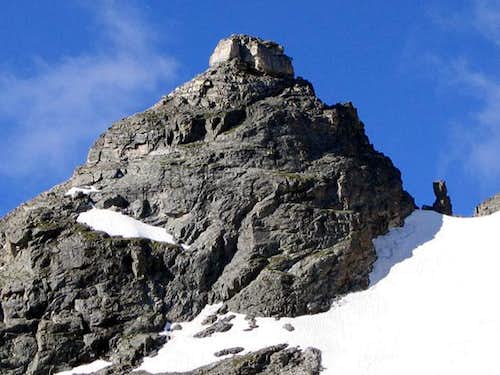 Several approaches are possible and all of them start from the Long Lake Trailhead on the eastern side of the Indian Peaks Wilderness. Here are directions taken directly from Protrails.com...

The Long Lake Trailhead is located within the Brainard Lake Recreation Area off of CO 72 (12 miles north of Nederland, just north of the town of Ward).

From Highway 72, turn west on Brainard Lake Road. In 2.6 miles you'll reach a pay station. Use the self-service pay station if no attendant is on duty. Continue another 3.2 miles on the paved road to the Long Lake Trailhead. This road may be closed at the halfway point from late October through late June or early July (depending on snow). 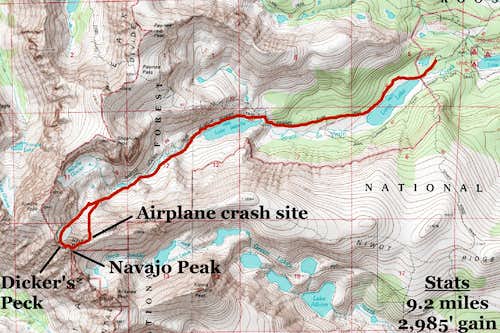 From the trailhead, hike up the beautiful valley following all signs for Lake Isabelle. At the lake, you are faced with two options. It is possible to find a faint trail that leads up on the western end of Lake Isabelle that leads more or less all the way up to the upper-most basin below Navajo Peak or you can boulder hop up the path of least resistance to the same place. 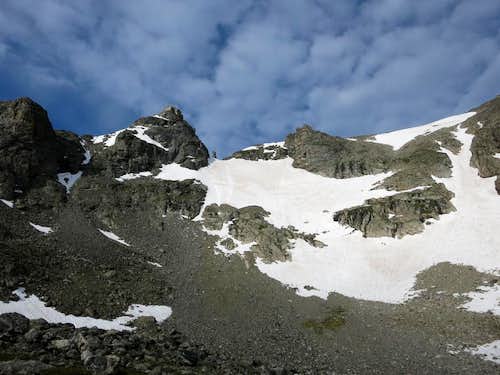 View from the upper basin. Navajo Glacier in plain view. Airplane Gully is out of view to the left.


Reaching the base of Dickers Peck will be the hardest part of the climb, and can be accomplished in three ways. The routes are as follows... 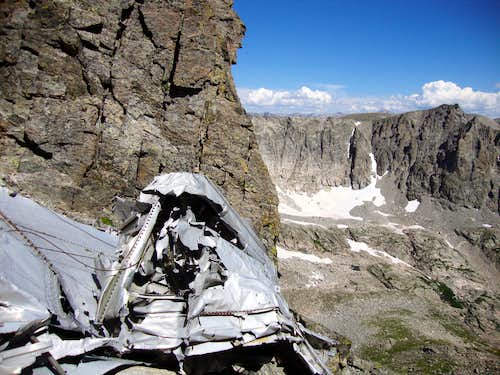 There is only one normal route to the summit of Dicker's Peck. Mountain Project suggests a few more serious variations, all requiring R or X climbing, but none of them are climbing on even an infrequent basis. Listed below is a description of the standard route, named Dicking Around (probably by Gerry Roach). It is a single pitch of approximatley 75 feet and begins on the north side of the formation. 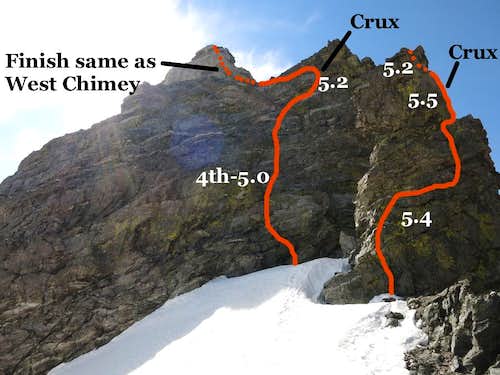 
P1 - 5.5 - Starting at the base on the north side, follow steep, yet easy terrain upward until harder terrain blocks upward progress. Make an easy traverse to the right, then follow slightly fragile rock up again to reach a small ledge. Traverse the ledge to the right to arrive at the base of a small crack. Ascend this crack for about 10 feet to another ledge, then make an exposed move out right onto the south face using a small foothold. Ascend easy terrain up the south face 10 feet to the summit. 80'

Descent: Rappel back north from a mess of webbing. 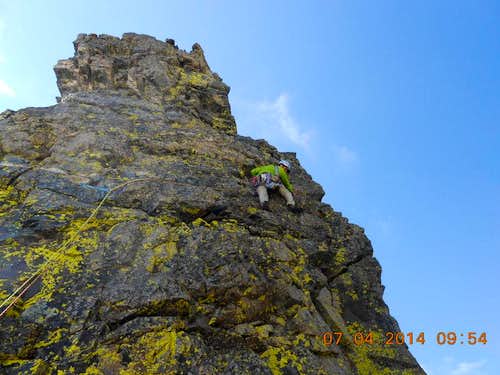 **As of 2015, there was 1 ancient piton, 2 knots in webbing, 1 fixed stopper and an assortment of confusing/tangled webbing that didn't appear to be even close to equalized. Feel free to bring new webbing, and the summit could stand to have somebody take the time to cut the old garbage out and replace it with something newer.**

This short and wandering route really does not require much gear. A small alpine rack should be more than enough for somebody confident at the 5.5 level, especially since the crux section is quite short. Below is a suggested rack, feel free to add or subtract based on your own experience level.

If approaching from the Navajo Glacier, ice ax and crampons will also be a necessity.