Devils Thumb is more of a sub-peak than an individual mountain in itself, but it bears little resemblance to its neighbors in appearance and difficulty, and it definitely deserves its own page since it is a certainly a different type of climb and summit than any of the surrounding peaks. This spectacular tower appears to offer many routes, beginning at mid-5th class in difficulty. No matter which route is taken, the climb is always exciting because of the dramatic summit and high exposure. The peak was first climbed in 1951.

Although the tower is not completely vertical all the way down to Devils Thumb Lake, it sure looks like it when looking from the tower’s summit, and you will enjoy the exposed feel of looking straight down to the lake, 1000 feet below while climbing the summit pitch. The summit seems to be one of the most dramatic in Colorado, and is the most dramatic summit I have yet climbed in the state. If you are not a technical climber, you will still enjoy hiking to the area just east of Devils Thumb for the great views of the tower and the surrounding mountains and valleys. 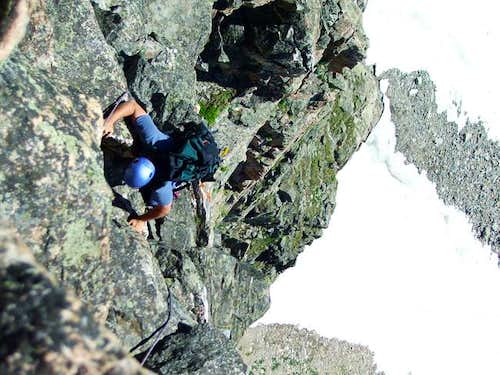 Scott spiraling up the Devil's Spiral. Great exposure on this climb; the snowfield below is at least 400+ feet lower.

Luckily this tower is still realitively pristine. Bolts and pitons are not needed to ascend this tower, and would detract from the setting of this summit. For the descent, there are plenty of chockstones to wrap slings around for anchors. Try to leave as little behind as possible. It would be best to cut all the old slings and use a retrievable sling behind, but I have to admit we didn't cut and pack out the old slings on this trip. Cheers to you if you do. 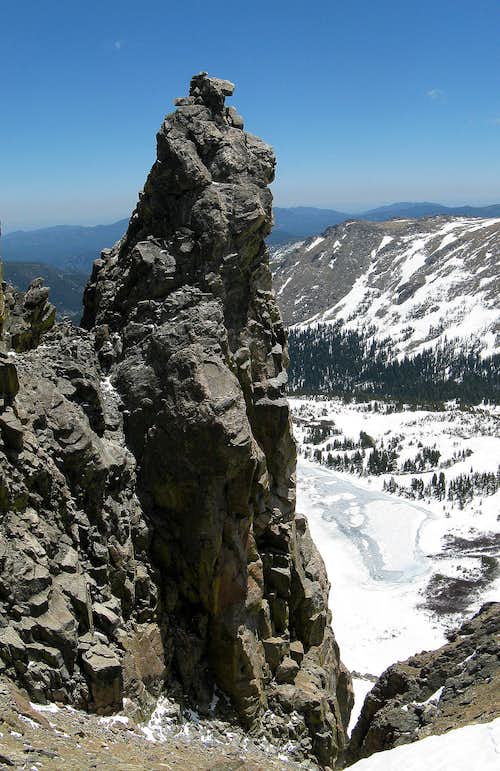 Devil's Thumb from the West.

Drive Highway 40, either north of Fraser, or south of Berthoud Pass, to just north of the main Winter Park Ski resort. Between mile markers 231 and 232, turn east on to the road marked for Corona/Rollins Pass (14 miles from Highway 40). This is County Road 80. Follow the main road to the trailhead at Rollins Pass. The road becomes Forest Road 149 after reaching the forest boundary. The road is rough in places, but cars can make it all the way to the trailhead when driven slowly and with great care.

Drive to the north end of Fraser on Highway 40, and to between mile markers 226 and 227. Turn east on to the road marked for County Road 8. Follow County Road 8 for 6.4 miles to the forest service boundary, at which point the road becomes Forest Road 128. Turn left and follow the road for 1.1 miles to a junction at which point you will turn right and drive for .3 miles to the end of the road and at a small dam. This is the trailhead. This road is also rough in places, but can be driven by a car if you go slowly and if care is taken. 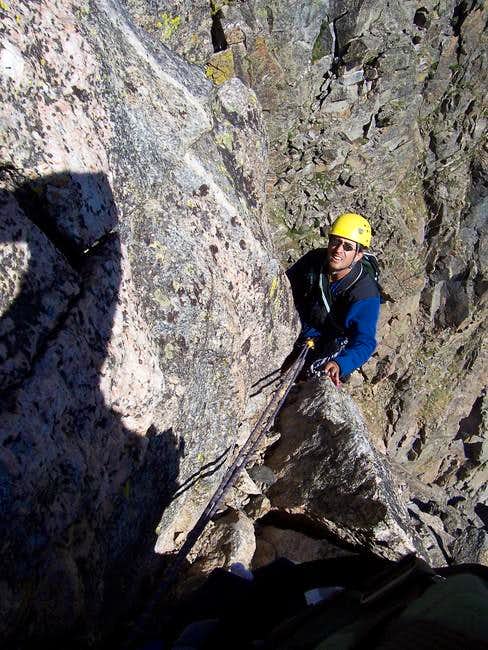 Starting the rappel west off the summit block.

Hiking routes to the base of Devils Thumb 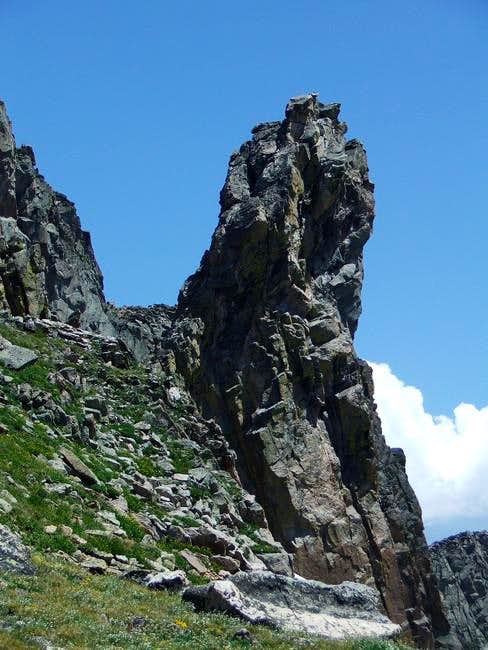 The route from Rollins Pass offers the shortest elevation gain, but since the route is entirely above timberline, it is more exposed to the elements. The road also opens later in the year and is often blocked by snow drifts into early July.

The route from Devils Thumb Park has more elevation gain, but is not difficult and the road is usually open earlier in the season. The trail also seems to see less hiking traffic.

All routes up the tower are of 5.4 or more in difficulty. The easiest route of all is described in Roach’s book Colorado’s Indian Peaks-Classic Hikes and Climbs. The route in the book approaches the notch between the tower and the Continental Divide from west (the book says north, so note the error if using the book) and at the same elevation of the notch. The easiest route, and the one described in the book, descends east to a chute and contours to a class 4 chute that is ascended to the ridge connecting to Devils Thumb. The route then descends the connecting ridge to the notch (class 5.4).

We found that the notch can also be traversed to much more directly using an obvious ledge and by downclimbing a 5.6 wall. See the route pages HERE and HERE for a description of our route from trailhead(s) to summit.

From the notch the easiest route up the tower is to circle around the Devils Spiral. This two-pitched route is only 5.3 if you search around for the weaknesses, but there are numerous variations and you can make the route more difficult if you so wish. The exposure in incredible and enjoyable and the ground drops below you on the east side of the tower! 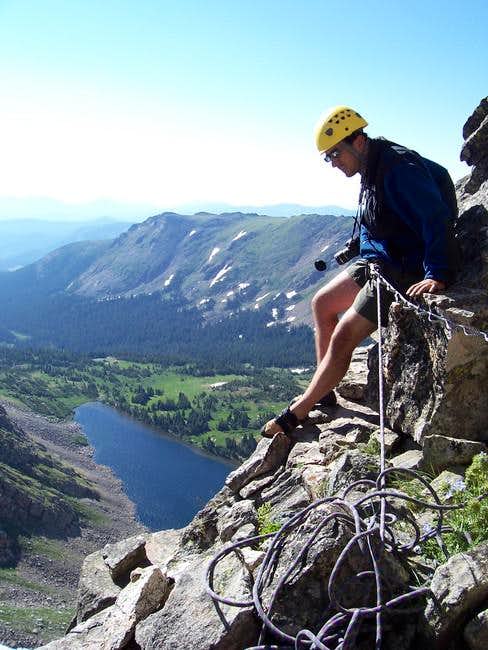 This photo is taken from the end of the Spiral itself and when we traversed onto the south face to make the final climb.

There appears to be numerous other routes available. There is a route on the south face that is rated 5.8. After rapping down directly to the notch it appears that a direct climb to the summit from the notch is certainly possible, and I’m guessing that the crux pitch would be about 5.8 in difficulty, but check this yourself. This is a great place to find routes on your own if you so desire. There appears to be some difficult overhangs on some routes, but I’ll leave it to the real climbers to try these out and hopefully post some route pages. 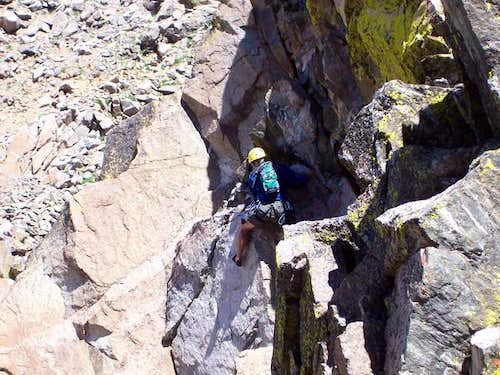 This is a section of the direct route to the notch, a variation we thought looked more exciting.

There are no permits required for day hiking/climbing. A permit is required for camping within the Indian Peaks Wilderness between June 1 and Sept. 15. Permits are $5.00 and are available at the locations below:

The normal hiking climbing season is July through September. I do not recommend this as a winter climb. The access roads are not open. The traverse from the Continental Divide to the beginning of the technical climb might be problematic and looks like it would be an avalanche-prone death trap in the winter. It would still be interesting to hike to the Continental Divide just west of the tower in order to view Devils Thumb. If you did this, the shortest route in winter would likely be from the Devils Thumb Park area. It would likely take three days since the road is not open out of season. There may be some avalanche danger just west of Devils Thumb Pass as well. 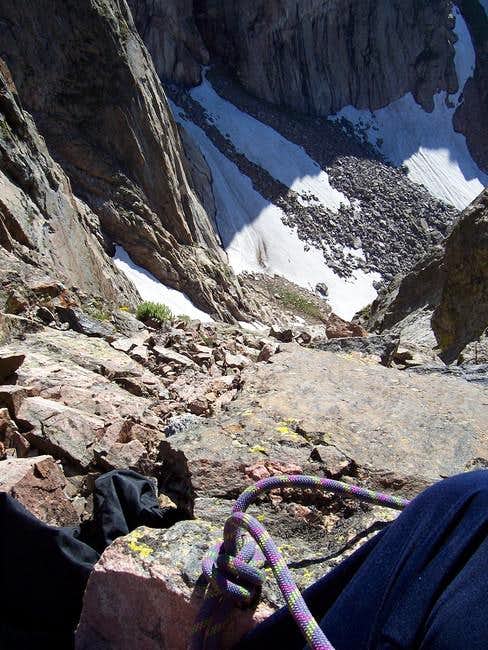 There are many campsites along the roads to the Rollins Pass and Devils Park/Cabin Creek Trailheads. Rollins Pass itself can be used as a campsite, but it can be windy and exposed to the elements.

Below is the climate summary for nearby Berthoud Pass at 11,315 feet elevation. These are all averages, so expect more variation, but this will give you a good idea about the climate at higher elevations in the area. *National Weather Service Data 1950-1985.