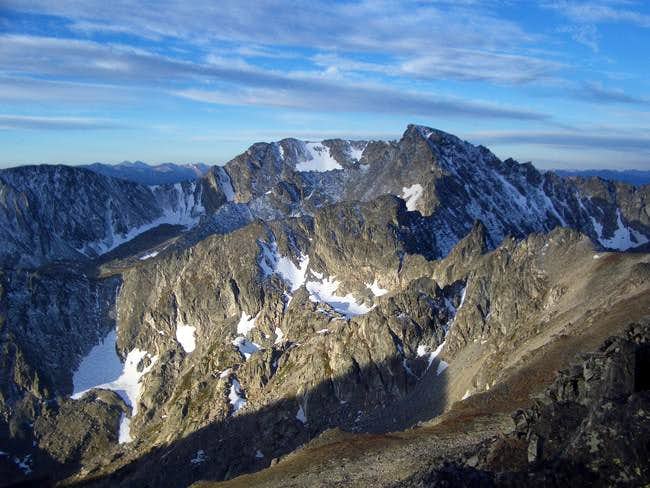 The Colorado Indian Peaks Wilderness is home to many of the best hiking and climbing routes in the state. All 73,391 acres of The Indian Peak Wilderness rests just south of Rocky Mountain National Park; it's basically an extension of its neighboring national park. As Gerry Roach notes in his popular book "It's smaller than Rocky Mountain National Park but no less spectacular." This impressive collection of jagged peaks includes 35 named peaks, 23 of which are over 12,000 ft, while seven are over 13,000 ft. From easy walk-ups to technical 5.5 climbing this mountaineering playground has something for everybody. Only 2 hours from Denver, the IPW can be a popular place for the day hiker, but solitude can be had by those willing to look for it.

North and South Arapaho Peak is home to the Arapaho Glacier, the largest glacier in the Front Range. It is the main water source for the Boulder Watershed program and is off limits to the public. The city of Boulder owns this watershed and much of the land surrounding it. Most of the new U.S Forest Service quads will show the boundary in detail. If you make the decision to hike anywhere around this watershed, please educate yourself concerning the boundaries. Getting caught hiking illegally through this private property will only result in a substantial fine.

If Longs Peak, Mount Elbert, and Mount Sneffles are monarch's of their respective mountain ranges, then undoubtedly the Arapaho Peaks deserves this title for the Indian Peak Wilderness. The Arapaho Peaks are South (13,400') and North Arapaho Peak (13,500'); each mountain deserving of its mountaineering accolades. North Arapaho Peak is the highest mountain in the IPW and highest mountain on the Continental Divide north of Denver. The Arapaho's provide 4 excellent snow routes, a classic class 3 traverse, a class 4 climb up the obscure Northeast Ridge, and an easy class 2 walk-up.

The traverse from South Arapaho to North Arapaho is a serious undertaking and should be respected. Getting caught in a fast building thunderstorm on this traverse would be a bad experience. The traverse is a half mile from South to North (a mile RT) and it takes anywhere from 2 to 3 hours to complete. The traverse keeps you at 13,500 ft. for three hours so be prepared for some altitude issues like headaches, slight nausea, and bright sun. The traverse is tough class 3 and some would say it has a few class 4 moves as well. It's my opinion that only experienced climbers take on the traverse, for the exposure is considerable throughout the route.

Traverse from South to North

The intial 100 yrds of the ridge is easy hiking over a talus. Once the ridge narrows the exposure on the east of the ridge increases, a drop from here would introduce you with the Arapaho Glacier some 5-700 ft below. But the west side of the ridge is where you can see your route. Roach notes in his IPW book that this ridge contains 4 short class 3 cruxes, he is right on. All 4 cruxes are clearly defined on the traverse.

The first crux is easy climbing on solid rock up to attain the ridge crest. The second crux is overcoming a soaring gendarme head on. You can bypass this sucker if you dropped down about 150 ft and traverse around it but it is not worth it. You have to climb into a notch and from there ascend a smooth, angled slab of rock to the top of the gendarme. There is considerable exposure on both sides. I have seen photos of this crux (10-ft. smooth, angled slab) and it seems that it looks a little more difficult than it really is. From the top of the gendarme you have to descend a narrow, flat, catwalk ramp with more exposure on both sides. The third crux involves a down climb of a steep face of rock to avoid an annoying notch in the ridge crest. This notch is just barely too deep for safe passage. I thought down climbing the rock face was the toughest crux on this route. The final crux is climbing a steep narrow gully up to the summit plateau. In early June, this gully is full of soft snow.

Forth of July TH

If you live either north or south of Eldora, use the following directions.
Go north or south on Colorado 119 to the neat little town of Nederland. Traveling north on 119, turn left at the Eldora turnoff. Coming from the north, turn right at the Eldora turn-off. Go 1 mile west past the Eldora ski resort and continue 2 miles to the town of Eldora. The road turns to dirt after the town of Eldora. The road is grated in early June of every year. This road is passable for most passenger cars but I wouldnÂ’t try it in my Toyota Camry. Continue on the road for 1.5 miles to a signed junction, turn right and continue 4.5 miles to the trailhead. The trail starts in the upper parking lot right after the Buckingham Campground. There is plenty of free parking.