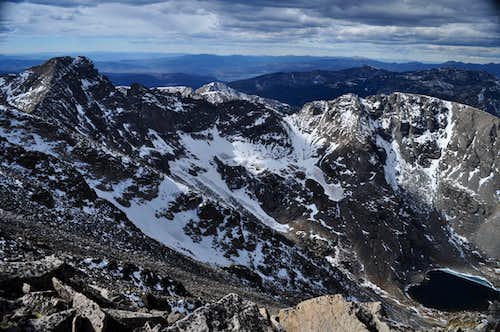 Paiute Peak is located in the fabulous Indian Peaks Wilderness. Although this represents one of the most heavily utilized wildernesses in the nation (being only about an hour's drive from Denver) there are plenty of chances for solitude in the area.

Paiute Peak sits high and mighty on the Continental Divide at the head of the Blue Lake drainage. It is a rugged mountain situated just to the west of the higher and more popular Mount Audubon. To its south rises the spectacular twelver Mount Toll. To its north is "Algonquin Peak" and Sawtooth Mountain. Amidst such spectacular company the views from Paiute Peak are impressive. From the summit is a commanding view of Longs Peak

Paiute Peak offers a more demanding climb then nearby Mount Audubon but it is easier than the other two nearby "scrambling" thirteeners, Apache Peak and Navajo Peak. Its easiest route follows a rocky couloir which rises to the northwest from the unnamed lakes above Blue Lake. An even more enjoyable route follows Paiute's east ridge from the summit of Mount Audubon. This ridgewalk is not much more difficult than the standard route and it is on more solid rock. The actual summit area of Paiute Peak is cleft into an eastern and western summit (separated by only 30 feet or so). The eastern summit is easy to get to and has the summit register; the western summit is just as high and getting to it involves the most difficult move on the described routes.

Paiute Peak is a complex mountain and presents a very different countenance when viewed from different aspects. The relaxed southeast face stands in sharp contrast to the scary north face (best observed from "Algonquin Peak") or the sheer western slopes. Enjoy this mountain named after Colorado's famed mountain Indians.

The Mitchell Lake Trailhead is at 10,500 ft.. and provides access to the Mount Audubon Trail and the Blue Lakes Trail. For the northern approach to this trail go south 10.2 miles on Colorado 72 from its junction Colorado 7. For the southern approach, go north 12 miles on Colorado 72 from Nederland to the Brainard lake road, which is just north of the tiny town of Ward. Turn west on the Brainard Lake Road and go 4.9 miles to Brainard Lake. About a mile into this stretch you will have to pay a small fee, around $5 for access to this area.

The following map was produced with my licensed copy of National Geographics Topo software.

Here is a summary of the Indian Peak Wilderness Rules and Regulations.