Click left side or right side of image to enlarge for better detail. This panoramic shot is 2 different photos stiched together with Nikon Panoramic software. 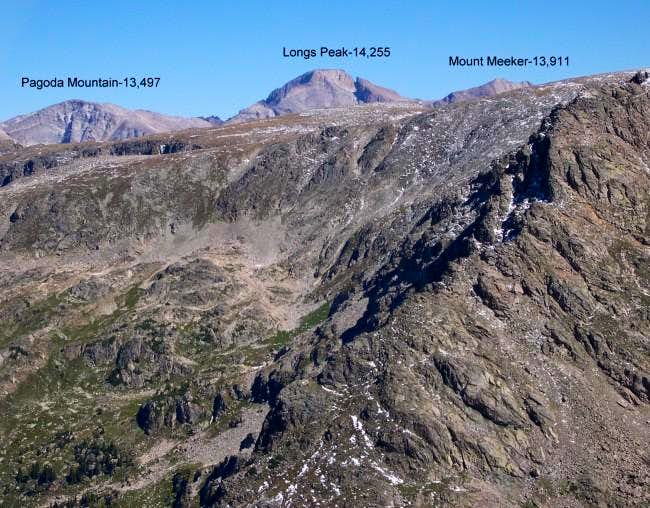 The Colorado Indian Peaks Wilderness is home to many of the best hiking and climbing routes in the state. All 73,391 acres of The Indian Peak Wilderness rests just south of Rocky Mountain National Park; it's basically an extension of its neighboring national park. As Gerry Roach notes in his popular book "It's smaller than Rocky Mountain National Park but no less spectacular." This impressive collection of jagged peaks is home to 35 named peaks and 23 of are over 12,000 ft., and seven are over 13,000 ft. From easy walk-ups to technical 5.5 climbing this mountaineering playground has something for everybody. Most trailheads beginning on the east slope are only 2 hours from Denver Co., thus the area is a popular destination for the day hikers. Conversely, all those day hikers are left behind with a couple miles of hiking; so experiencing solitude can be had for those willing to work for it.

Hiamovi Mountain (12,395-ft) resides deep in the Indian Peak Wilderness just a quarter mile south of the Rocky Mountain National Park boundary. Hiamovi Mountain is the eastern-most high point within a collection of remote summits running northeast from Grand Lake toward the Continental Divide. Typically, hikes and climbs that start on the west slopes of the Indian Peaks usually provide more solitude and a less traveled network of trails than hikes that begin on the east slopes. The same can be said for Rocky Mountain National Park. Here is the catch, be prepared for very long approaches with substantial vertical gain. Also, the Roaring Fork-Hell Canyon area lack the high elevation peaks that beg for attention, making this area even less environmentally impacted by man. In Hiamovi’s case, the low summit elevation should be a moot topic considering it is the highest point within a 12-mile vicinity west of the divide, thus the excellent views. The reclusive nature of Hiamovi’s summit, along with a short jaunt up Mount Irving Hale makes this mountain a worthy addition to Summitpost, and well worth the 13 mile round trip.

Hiamovi’s summit separates two vast, and very remote drainages, the IPW’s Hell Canyon, and RMNP’s Paradise Park Drainage. Both drainages are arguably the most pristine places within their respective boundaries. To the north, Paradise Park is a designated Research Natural Area that is used for scientific investigations which requires the area to be unaltered by human intervention. Day hiking is allowed, but there are no trails in Paradise Park and camping is not allowed. Hiamovi’s cliffed–out south face is paralleled by the Hell Canyon which supports a series of high alpine lakes, most notably Upper and Lower Stone Lakes. The upper portion of this drainage is somewhat accessible by a 7-mile hike up the Roaring Fork Drainage but the lower portion from the popular Buchanan Pass Trail would be a logistical nightmare due to steep and rough, tree-laden terrain.

Hiamovi’s Southwest Slope Route is a class 2 hike, albeit a long hike. Once above tree line, you’re eyes are graced with a spectacular scenic tour of the northern IPW and southern RMNP. Immediately south just across the Hell Canyon rests Marten Peak and Cooper Peak. Further south is a well-situated collection of breathtaking highpoints named “Lone Eagle Cirque”. The constant view from Hiamovi’s southwest slope offers a unique vantage of the different kind of ruggedness displayed by prominent peaks as Mount Toll, Paiute Peak and Apache Peak. Looking north, expect unobstructed views of Watanga Mountain and Isolation Peak. Lastly, as if that wasn’t enough, Ogallala Peak and the great Longs Peak dominate the view east.

Only .4 mile east of the summit of Hiamovi Mountain rests “Hiamovi Tower” at 12,220-ft. The Tower rises 280-ft from the saddle of Hiamovi Mountain and a whopping 1,400-ft from the deep abyss-like Hell Canyon. “Hiamovi Tower” is the showpiece technical climb in the area, offering 1,700-ft of solid rock, via eight roped pitches of 5.4 climbing up the southeast buttress. Again, expect 6 miles hike and 3,500-ft of vertical gain to arrive at Lower Stone Lake and beginning of the “Hiamovi Tower” Southeast Buttress Route. Gerry Roach has a very detailed route description for the Tower in his IPW mountaineering guide.

Please submit Hiamovi Tower as its own page to SP if you have actually climbed the mountain. I would be happy yo delete this section and re-submit my images to your page.