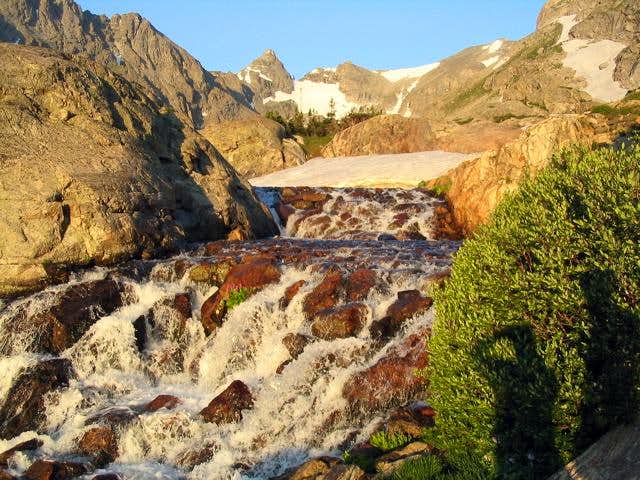 The following photo courtesy of CharlesD

The Indian Peak Wilderness is located just northwest of Boulder Colorado; it's really just an continuation of the existing beautiful mountains of Rocky Mountain National Park. Because of the Indian Peaks proximity to Denver and Boulder, and easy access, this area is probably the most frequently visited wilderness in Colorado. From easy walk-ups to technical 5.5 climbing this mountaineering playground offers something for everybody.

Navajo Peak (13,409 ft.) rests within the Brainard Lake Recreation area with other prominent peaks such as Apache Peak, Shashoni , Paiute, Toll, and Mount Audubon. This picturesque cone-shaped peak is the third highest mountain within the Indian Peak Wilderness boundary. It is a real mountain with a real class 3 rating, and is not for the novice hiker. The summit cone involves some interesting airy moves around its 30 to 40 ft. summit cliff on relatively solid rock.

There are two main trail systems in this area, the Mitchell Lake Trail and the Long Lake Trail, both are well maintained and deliver you to high and wild places. The Long Lake Trailhead (10,500 ft.) is the starting point for a Navajo, Apache, or a Shashoni climb.

The Apache/Navajo Peak Massif from the west

Apache Peak is the high point on the left and Navajo Peak is the cone-shaped Peak on the right.

The aircraft went down on January 21, 1948. The aircraft was a Civil Aeronautics Administration C-47. The aircraft had left Stapleton Airport was en route to Grand Junction from Denver. The likely cause of the crash was a severe downdraft in bad weather.

Interesting to learn about the airplane wreckage. I stumbled across a mangled fuselage in a boulderfield on my approach to Apache last October. What I found definitely was not up high in a gully, but relatively far back and down low from any cliff.